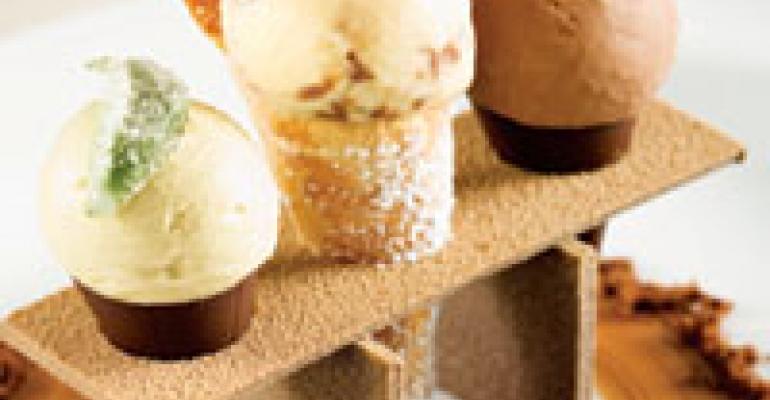 As the summer season officially checks out and the weather is starting to cool off, chefs say that diners are warming up to rich, decadent chocolate.

Carmichael says the idea for the cones came to him because he already had cone-shaped molds in his shop, and he thought it was best to work with what he already had. To make the cones he chops tempered chocolate finely and slowly melts it until it is a liquid, being careful not to let it get too hot. Once the chocolate is melted he pours it into the molds, taps on them to get rid of bubbles and make sure they are even, then scrapes off the excess and lets them set before popping them open. Once they come out, he says, “You get this really beautiful, shiny, extra bitter 76-percent chocolate cone.”

Gilt has a well-developed chocolate program and does a lot of retail chocolate business, Carmichael says. While strange-flavored chocolates come in and out of vogue, Carmichael says he tries to focus on executing his chocolates as well as possible, and doesn’t eschew the popular flavors like caramel, cinnamon and orange.

That isn’t to say that he hasn’t done some experimenting though.

“I’ve done some toasted cumin, and some saffron with white chocolate, which looks gorgeous,” he says.

“Some people want to try to make the wackiest flavors,” he says, “and they forget that execution is the most important thing.”

Carmichael agrees that his guests order more chocolate during the cooler months, though he maintains that chocolate never really goes out of season.

“It’s pretty steady all year, but probably people will indulge in it a little more during the winter,” he says. “Chocolate tends to lean on the richer side, and I just find that it’s normal for people to want to eat fuller meals during the winter.”

The 78-unit Morton’s the Steakhouse is also getting into the haute chocolate game by hosting a series of champagne and chocolate tastings at 30 of its locations from September through November. The events are $45 a person. According to Tylor Field, Morton’s vice president of wine and spirits, the restaurants had often hosted separate champagne and chocolate tastings that were extremely popular, so it just made sense to combine the two.

“Our guests seemed to be really in love with both concepts,” he says. “So we worked a program together to try to bring these two very decadent and delicious things together in a way that would ‘edutain’ our guests.”

The programs run for an hour and a half and begin with a selection of hors d’oeuvres including mini filet mignon sandwiches, broiled sea scallops and smoked salmon wedges. The salty food pairs well with the Piper Sonoma Brut for the reception, Field says.

“It’s about savory and salty,” he continues. “A great pairing with champagne is potato chips.”

Pairing champagne with chocolate is unusual, Field says, because sugary foods are “a no-no” with most champagnes and sparkling wines.

“But the way chocolates are made now, especially from artisanal companies, they’re using different spices and savory components—salts and things like that, so you can really make it work,” he explains.

The menu for the chocolate and champagne event includes four varieties of chocolates. First on the list is a gianduja prepared with milk chocolate, almonds and caramelized walnut paste. The “ambrosia” is white chocolate with macadamia nuts and orange liquors, and the “naga” is a milk chocolate with curry and coconut. Finally there is the chocolate with pink Himalayan sea salt and goji berries in milk chocolate. According to Field, the chocolates will be offered with a brut and a rosé, so guests can try all the different possible pairings and learn for themselves which ones they like best.

“The rosé is going to be a little sweeter,” he explains. “It’s the same concept to balance in your mouth the sweeter wine with the spicier food, so the naga will go with the rosé.”

According to Torres, customers’ growing curiosity about what they’re eating is part of an ongoing sea change he has seen in the way American customers approach food.

“I think that chocolates have become better than they used to be,” he says. “That has been the movement in the food industry from coffee to wine to cheese and chocolate. Maybe it is because the Web makes it easier to get information, or maybe it’s because Americans travel a lot more. Either way, they get more educated on food and the quality of food.”

“But I’m in New York City,” he says, “and maybe I cater to people who know a little bit more about dark chocolate.”

Torres says the most popular flavors are still predictable. “If you do anything with peanut butter, coffee or nuts, people love that,” he says. “Those are the favorites over the exotics.” He does a passion fruit chocolate, but he says not everyone likes that because there are still a lot of people who don’t know what passion fruit is. But there is still a sizable population that wants to try experimental chocolates, and a few traditionalists aren’t going to stop creative chocolatiers from rolling up their sleeves and having a little fun. Torres says in October and November he plans to start rolling out new flavors.

“We’re going to do some chocolate with red wine and spices,” he says. “And a chocolate with different species of mint for the holidays.”— [email protected]