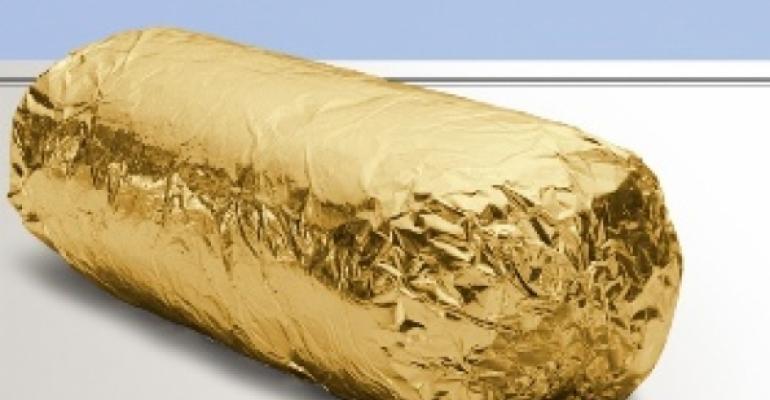 Chipotle gets wrapped in gold

Chipotle Mexican Grill debuted on Tuesday the first in a promised series of marketing events to highlight the brand’s ‘Food With Integrity’ message — a burrito wrapped in gold foil.

In celebration of the chain’s 18th anniversary, Denver-based Chipotle will switch from its iconic silver foil to gold for the next four months. Billboards tout the chain’s “gold ingredients” and Chipotle jokingly refers to the campaign as “unlimited time only” as its ingredients are always part of Chipotle’s mission.

“Traditionally, an 18th anniversary is celebrated with porcelain, but that clearly wouldn’t have worked,” said Mark Crumpacker, Chipotle’s chief marketing officer, who also called the move “pretty stylish, in a ‘70s sort of way.”

The gold foil is meant to draw attention to Chipotle’s ‘Food With Integrity’ mission, which focuses on the use of ingredients that include naturally raised meats, local and organically grown produce and dairy products made from rBGH-free cows.

Chipotle founder and co-chief executive Steve Ells has said the ‘Food With Integrity’ message would be a focus of the chain’s marketing efforts this year. For example, a new loyalty program is set to debut in April, in which customers will be rewarded for their knowledge of Chipotle’s stand on ingredients, or other brand attributes.

• An ad campaign that includes outdoor, radio and online elements.
• Restaurants will carry a mock newspaper called “The Gold Burrito Digest,” and customers will be invited to text a short code that will allow them to learn more about Food With Integrity using mobile phones.
• An online contest called “Wrap What You Love,” which will ask guests to submit photos of objects they love wrapped in gold foil. Those with the most creative submissions can win 24-karat solid gold Chipotle burrito coins and $10,000.
• The campaign also will raise money for the nonprofit FamilyFarmed.org, which supports programs that help family farmers bring local food to market.