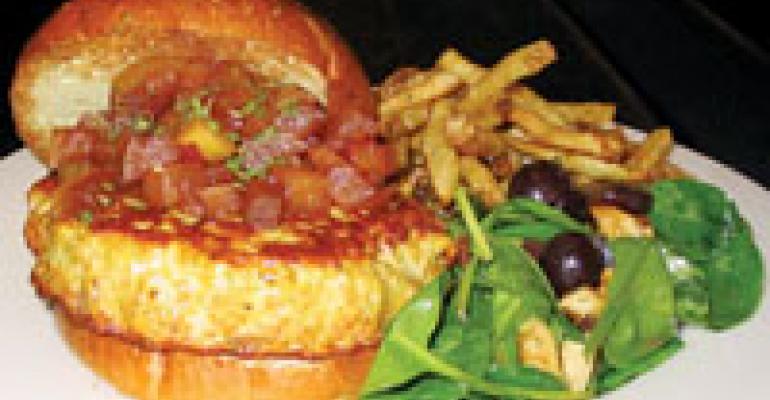 The phrase “chicken trimmings” does not have a particularly appetizing ring to it, but it is music to Rick Yoder’s ears. The owner of Wild Ginger, an Asian restaurant in Seattle, has a best-selling pot sticker dish using chicken harvested from all the birds his kitchen processes.

“It is a necessary ingredient to utilize the residual from the meat preparation,” Yoder says. “The only other use for it would be to put it in soup.”

Yoder and his wife, Ann, opened the restaurant in 1989. About seven or eight years ago, they added chicken pot stickers to the menu as an appetizer, and Yoder estimates they sell about 500-600 a day. The success has made ground chicken indispensable to the menu.

“We break all of our own chickens down here in house,” he says. “When we are cutting the chicken for other types of things…we take the trim [or meat and fat pieces] grind it up and use it as a filling for the pot stickers.

“You want to get some of the fat in there because it imparts flavor and keeps it moist,” he adds.

They add a number of flavor enhancers to the ground chicken, such as ginger, sesame oil, scallions and a small amount of garlic. The dough for the pot stickers is house-made and stuffed before being steamed and then pan-fried.

“The steaming sort of cooks it, and the pan-frying crisps it up on one side,” Yoder says.

The pot stickers come with six to an order at $8.95 and are served with a soy-based dipping sauce.

When it comes to sausages, burgers and other dishes made from ground meat, beef and pork are common, lamb and veal are not unusual, but rarely does America’s favorite go-to meat, chicken, come to mind.

Chicken long has been a staple in restaurant kitchens, favored for its versatility and perceived healthfulness, and its ground incarnation is proving to be popular at establishments as diverse as local pubs, national chains and fine-dining restaurants.

Ground chicken gives Dmitri Wilkins, chef at Bistro Ten 18 in Manhattan, a chance to experiment with special appetizers and lunch entrées. For example, he recently made a chicken croquette appetizer and a curry chicken burger, both of which ran as specials.

The chicken pieces for the croquettes are boiled in a mixture of white wine and chicken stock.

“You can use any part of it, as long as there are no bones in it,” Wilkins says. “I prefer to add the skin because it adds more moisture and flavor.”

He sautés a mirepoix in butter, adds flour to make a roux and then adds milk and lets it thicken. He adds ground chicken meat and spices, including salt, pepper, onion powder and cayenne pepper. Next Wilkins adds smoked Cheddar, parsley and Dijon mustard.

That mixture is portioned out, formed into disks, breaded and deep-fried. When he serves the croquette as a special appetizer, it comes with a chipotle aïoli dipping sauce.

Wilkins’ ground chicken curry burger is another way to offer customers a lighter option for lunch.

“It definitely sells well, and I think people are attracted to it because it is a bit more healthy than some of the other options,” he says.

Wilkins mixes ground chicken with curry powder and sautéed mirepoix and forms a patty. The burgers are first grilled, then finished in the oven. The burger is topped with a chutney made with apples and onions sautéed and reduced with red wine vinegar. It is served with a salad of spinach, walnut and red grapes, as well as French fries.

The chicken for the dish is ground in-house, and Piazzi says only white meat is used. The chicken is then cooked over high heat in a wok.

“You can’t sear in the flavor without the wok,” Piazzi says. “Any time you get that sear, that Maillard [reaction, or browning], you get the umami.”

The sauce that is added, consisting of soy sauce, wine and sugar, marries quickly to the chicken in the high-heat environment.

“When you add the sauce, it almost melts instantly in,” Piazzi says.

The dish is then served on a bed of fried rice sticks, with lettuce cups on the side. The chicken lettuce wraps have been on the menu since the chain’s inception in 1993. P.F. Chang’s China Bistro Inc., the chain’s parent company, operates about 150 casual dining units in the United States, as well as more than 100 Pei Wei Asian diners, a fast-casual concept.

Tim Graham, chef de cuisine at Tru in Chicago, makes sure to add fat to his ground chicken dishes, for flavor and moisture. The modern fine-dining restaurant occasionally serves a chicken boudin dish on its tasting menu, with two chicken sausages, each about the size of a pinkie finger, served over pasta.

“I think you have to be careful that you adjust the fat content,” he says. “Normally you eat chicken with the skin and the skin helps provide the fat that moderates the leanness of the meat.”

For the sausage, the chicken is processed into a mousse and cream is added, along with truffles. The mixture is inserted into plastic wrap, sectioned off with string and the resulting sausages are poached.

He stresses that the way the chicken is cooked is just as important as what you add to it. He poaches chicken sausage, rather than grilling it, which helps to prevent it from drying out.

“Overcooked chicken is not good, whether or not it is overcooked whole chicken or over-cooked ground chicken,” Graham says. “Just because you grind it, doesn’t mean it is invincible to abuse.”