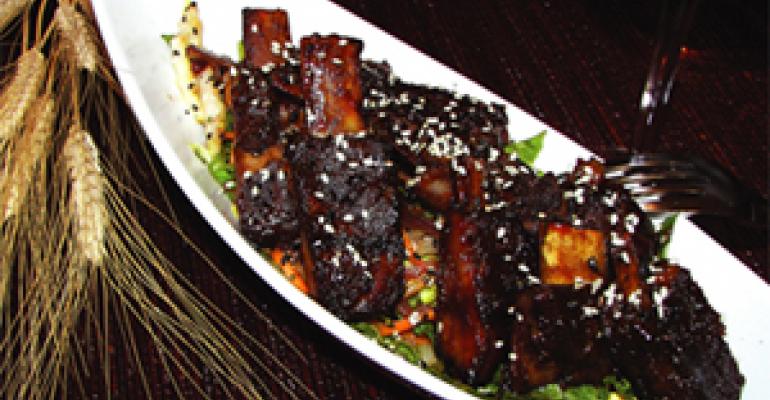 Lamb ribs are back on the menu as an appetizer at Montecito restaurant in Denver. Chef Adam Mali had removed them to make room for other items he wanted to try, but he quickly learned what some other chefs around the country have come to know: Once on the menu, lamb ribs are difficult to remove.

The uncommon cut of meat from the lamb’s breast often surprises customers, but once they taste the meaty little bones, they get hooked, say chefs and restaurateurs.

Mali initially made the ribs a special to placate eager customers, but the requests for the dish were so consistent, he returned it to his spring menu.

“We had quite a public outcry to get them back on,” Mali says. “If cooked correctly, they become tender, flavorful and wonderfully comforting.”

Pork ribs are a staple in American culture, but lamb ribs are far less common, says Steve Chiappetti, chef at Viand in Chicago.

“When people first hear it, there’s a pause before they order it,” Chiappetti says. “Then after they try it, it’s ‘Oh, my God!’ and they make another order, this time for their entrée.”

Chiappetti, who grew up with lamb—his family owns a lamb slaughterhouse in Chicago—introduced the lamb ribs to Viand’s customers when he became chef there last fall. They immediately became the most requested appetizer.

“The reason I chose them is they are so tender,” Chiappetti says. “They are a little fatty, but that’s the flavor.”

Chiappetti braises the ribs in the oven with five-spice powder and lamb stock. Then he places them on the grill with a dusting of five-spice. The ribs are glazed with a soy and plum sauce and served with an Asian slaw.

Slow cooking is a key component in preparing lamb ribs, Mali says. The first time he ever prepared the ribs, he tried simply cooking them on a grill, but those ribs were overcooked, dry and tasteless.

“They come with a lot of fat, so the longer and slower you cook them, the more the fat melts away and develops flavor and caramelizes,” he says.

Mali uses the spare ribs from the lamb, often known as the “Denver cut.” He braises them for about seven hours at a low temperature in red wine and veal stock. The ribs are then flashed on the grill and painted with a lavender-honey sauce. Depending on the size of the rack received from the supplier, the appetizer will be four to five lamb ribs served with a condiment of roasted red peppers and Spanish olive oil.

Marinating is an important component for lamb ribs at Papagus, a Greek restaurant in Oak Brook, Ill. Chef Savino Ayala marinates the ribs for at least 12 hours—or up to 24 hours when possible—in fresh herbs, such as thyme, oregano and rosemary, and a mixture of olive oil, lemon juice, salt and pepper. Then the ribs are cooked in the broiler. The ribs come with a sauce, but they often don’t need it, Ayala says.

At Papagus, the ribs, cut into 2- to 2.5-ounce portions, are a part of an entrée for lunch or dinner, served with potato wedges that are marinated with lemon juice and cooked in the oven for an hour until crispy.

Lamb ribs are definitely a more delicate cut of meat than beef or pork ribs, says Case Dorman, president of Fiorella’s Jack Stack Barbecue, a four-unit chain based in Kansas City, Mo., that also has a catering and retail business. Lamb ribs have been on the menu for about 20 years. The restaurants sell about 1,000 pounds of lamb ribs per week.

At Fiorella’s, chefs dry-rub seasonings on the ribs, sear them over an open flame, then turn down the heat to tenderize them, Dorman says. The process takes about two to three hours.

“They are served with our barbecue sauce, although the sauce is an option,” Dorman says. “They’re just phenomenal.”

Lamb ribs have been on the menu at Columbia Restaurant for at least 10 years, but are still a relative newcomer considering the concept’s original location in Ybor City, Fla., has been open for 100 years, says corporate chef Geraldo Bayona. There now are seven Columbia Restaurants in southern and central Florida.

Several items have been on the Columbia’s menu for years, Bayona says. He joined the company as a sous chef when the sixth Columbia opened in Celebration, near Orlando. Lamb ribs were put on the menu there as an appetizer. They were such a hit that the ribs were added to menu at all of the Columbia restaurants.

Columbia’s staff first cooks the ribs with garlic, lime and oranges, marinates them in grenadine and plum sauce, and then bakes them. Each order then is brushed with a guava sauce and grilled. The lamb ribs are served by themselves as an appetizer, but they also are part of a combination appetizer of ribs, fried calamari, shrimp, crabmeat and artichoke hearts.

“I like the lamb ribs because they are so different,” Bayona says. “Everyone is used to pork ribs, beef ribs. When they see lamb ribs, it’s like, ‘Wow!’ It’s a unique item.”