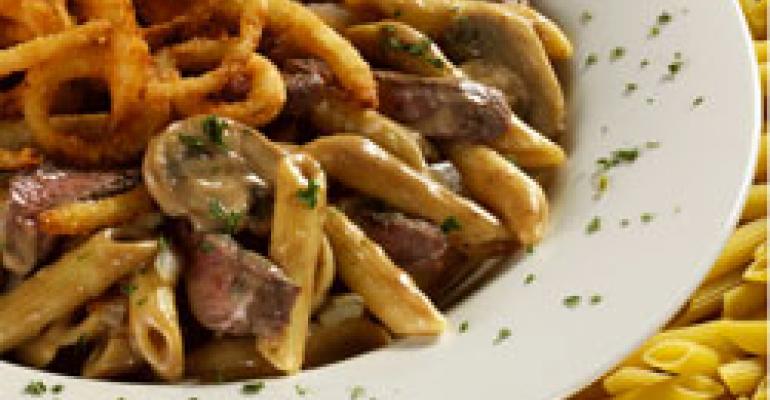 Restaurant kitchens are jam packed with foods that have jumped ethnic boundaries to become fixtures of the American diet. Hot dogs have transcended their Germanic roots and are ballpark staples and picnic standards, while salsa has taken its place alongside ketchup as a condiment of choice. Pizza is on menus from breakfast through dessert and in venues from schools to taverns. But when it comes to culinary crossover, no ethnic food is more broadly accepted and widely used than pasta.

Pasta’s path to popularity is well worn. It came ashore on a massive wave of immigration that brought three million Italians to the U.S. in the first two decades of the last century. It received a second wind as globetrotting American tourists swarmed Italy, attracted by its culture and its cuisine.

More recently, celebrity chefs have burnished pasta’s image and made it the star of TV cooking shows. Taking a cue from these powerful external forces, chefs have embraced pasta, using it as a blank canvas for a range of innovative items.

It’s rustic and robust. Pasta rates high on the satisfaction index in the best of times, but when the going gets tough, its comforting qualities really shine. It delivers value as the focal point of substantial, filling dishes like Romano’s Macaroni Grill’s Penne Rustica, which delivers a hearty amalgam of shrimp, chicken and aged prosciutto, or Fazoli’s Tortellini Robusto, which boasts a pair of proteins, chicken and sausage, along with a dairy duo of mozzarella and provolone cheeses.

Fast-casual Go Roma offers Rigatoni Country Style that marries conventional ingredients like sausage, tomatoes and roasted peppers with contemporary touches like fresh basil in a garlic-cream sauce. Perhaps the ultimate menu mash-up of comfort classics is the use of pasta as the basis of a number of Stroganoffs, in which it complements the meat and sauce and provides ample plate coverage. A bit of a menu boomlet, current examples include the Steak Stroganoff at Country Kitchen, Bob Evans’ Pot Roast Stroganoff and T.G.I. Friday’s Prime Rib Stroganoff.

Arguably the biggest newsmaker in the pasta category over the past couple of years has been the unexpected appearance of pasta entrées on pizza-chain menus. Looking to appeal to budget-conscious families and to blunt the impact of the emerging recession, Pizza Hut led the charge in spring 2008 with the introduction of its Tuscani Pastas that are meant to feed a foursome.

In spring 2009, arch competitor Domino’s jumped in with five penne dishes; in a nice point of differentiation, each is baked in a lightly seasoned bread bowl. At about the same time, Pizza Inn rolled out three family-style pastas including Sausage and Shells Pomodoro.

On the subject of baking, it’s a prep technique that complements the heartiness of many pasta dishes. Fazoli’s introduced a new menu in 2009 that features a number of oven-baked specialties, including Creamy Chicken Basil and Twice-Baked Lasagna. And Bertucci’s Lasagna Rustica, with its handmade layers of pasta, is promoted as “baked to perfection” in a brick oven.

It’s good for you, too.It’s been about five years since the Atkins Diet and its prohibition of carbohydrates forced a substantial number of restaurant patrons to eschew pasta for protein. Reporting on the phenomenon, research gurus at the NPD Group observed that the typical Atkins acolyte fell off the diet wagon after 90 days or so.

Aprimary reason for that fall: Dieters missed pasta. It was a dish they simply couldn’t do without.

In line with recent concern over serving size, a number of chains offer pasta portion options, like Go Roma, where all pasta specialties can be ordered in half or full sizes. T.G.I. Friday’s made a splash sometime back with the introduction of the Right Portion/Right Price line, and currently half the RP/RP items feature pasta. In addition to the Prime Rib Stroganoff with curly lasagna noodles, patrons can choose toothsome specialties like Parmesan-Crusted Chicken served on three-cheese tortelloni or Cedar-Seared Salmon over fettuccine.

Made-to-order dishes are a primary signifier of both freshness and health, and Vapiano, based in Germany and expanding internationally, has built its business on what it calls “front cooking.” At the chain’s six U.S. units, pastas are prepared to order in front of the customer by carefully trained “cook-trainers,” who also interact with patrons and help them navigate a range of pasta styles and toppings.

It’s authentic and it’s fanciful. Some chains stake their reputations on genuine pasta items that reflect their place of origin, like Il Fornaio’s long-running Festa Regionale program. Each region of the country is featured in a menu created by one of the chain’s chef-partners who hails from that area. The first two weeks of January, for example, explored the cuisine of Friuli and included Ravioli d’Anatra agli Asparagi, ravioli filled with duck and finished with an asparagus cream sauce. Regional desserts and wines completed the tasty tour.

Olive Garden has also built a strong franchise around and takes menu inspiration from its Culinary Institute of Tuscany. Dishes like Braised Beef in Tortelloni reflect the true tastes of the region and carry a special menu symbol denoting their authenticity.

Other chain chefs take a more creative approach, adding an element of surprise with unexpected ingredients. California Pizza Kitchen has been a prime mover in this regard, and the pasta menu is an international conglomeration that includes sizzling Kung Pao Spaghetti with red-hot chilies and sexy Chicken-Tequila Fettuccine in a tequila-lime and jalapeño-cream sauce. Shari’s puts mesquite-grilled chicken atop penne Alfredo, and Carino’s marries Jalapeno-Garlic Tilapia with angel hair pasta.

It goes uptown. Chefs working in independent restaurants are as enamored of pasta as their chain-restaurant counterparts, of course, and what frequently differentiates their offerings is the presence of specialty proteins. On the menu at San Francisco’s hot Perbacco, for example, are agnolotti with heritage turkey and paccheri, large pasta tubes, with local albacore tuna ragu.

Where to from here? Prized for its versatility, pasta is a go-to ingredient that’s equally at home in fine-dining operations and in the mass market. While it’s an accepted presence for the first or second course, it rarely appears elsewhere on the menu, and the time is right to look outside the pasta box.

Brunch service is growing, and soup-and-salad specialist Sweet Tomatoes promoted an innovative Mediterranean Sunrise Pasta on the morning menu last year. Smartly simple, it comprised scrambled eggs, onions and peppers tossed with spaghetti — sort of an Italian-style Denver omelet. And it’s just a matter of time until an enterprising chef takes a leap from kugel, the sweet, noodle-based pudding, and puts pasta front and center on the dessert menu.

IN THE SAUCE — SPIRITED PASTA TOPPERS ON CHAIN MENUS

Nancy Kruse, president of The Kruse Company, is a menu trends analysts based in Atlanta. E-mail her at [email protected]