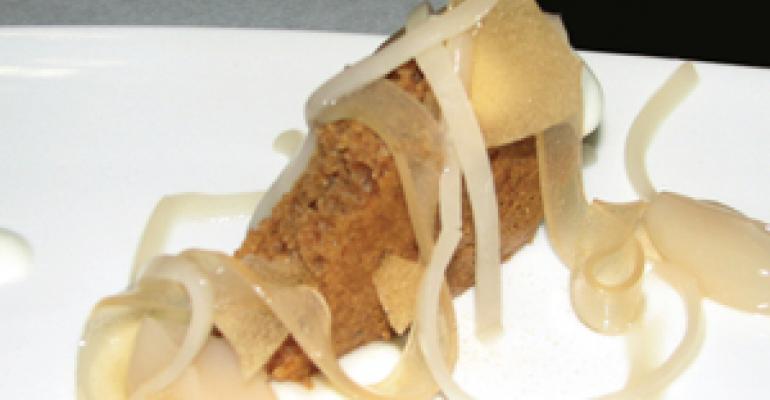 Restaurant chefs are borrowing from their counterparts in the manufacturing world again, this time by using vinegar powder to bring tanginess to their food without added moisture.

Vinegar powder is used by research and development chefs to add shelf life to products and also as an ingredient in rubs, but it has more whimsical applications, too.

David St. John-Grubb, executive chef of Le Cordon Bleu College of Culinary Arts in Miami, says he has seen the powder used mostly in the R&D world to extend the life of products that need to be free of the chemicals normally used for such purposes. Used in small doses vinegar powder will change an ingredient’s pH level without affecting its flavor or texture, he says.

For research chef J. Hugh McEvoy, a writer for Prepared Foods Magazine and president of the Research Chefs Association’s Chicago chapter, vinegar powder was a pantry staple when he was in the Navy in the 1970s. He served as chief cook on a nuclear submarine.

“It has numerous uses and takes up very little space compared to the liquid version,” he says. “We used it for anything that you would use normal vinegar in.”

One such use was shake-on salad dressing, “like what Starbucks does for cinnamon,” he says. McEvoy would mix dried apple vinegar with granulated garlic, salt, pepper, ground dried basil and oregano, “a hint of MSG” and some granulated sugar.

“You’d spritz on your own oil and then shake on the vinegar, and it would taste pretty good,” he adds. “We used to clean grills with it.” He would scrape them clean, shake powdered vinegar on it, let it sit for 10 minutes, and rinse.

Vinegar powder is made by spraying a thin layer of vinegar onto maltodextrin or other edible crystals. The many flat edges of crystals give them more surface area, allowing them to hold a lot of vinegar, he explains.

“A Kool-Aid packet of this stuff could make gallons and gallons of vinegar,” McEvoy says. Vinegar powders can cost as little as $6 a pound.

But when Jordan Kahn, the pastry chef of Varietal in New York City, tried what was on the market, he deemed it “God-awful stuff,” and decided to make his own. Using a method he credits to British chef Heston Blumenthal, he dilutes vinegar—he has used 50-year-old sherry vinegar, rice wine vinegar, balsamic and others—with water and adds agar-agar to make a gel. He then purées the gel to give it a texture slightly looser than gel toothpaste.

Next he adds maltodextrin, spreads the mixture on acetate plastic sheets and dries it in a dehydrator. He then will either grind the sheets into a powder or use shards of it on desserts. The shards are made by breaking the dried vinegar sheets.

These days he uses both shards and powder made from 10-year-old Banyuls vinegar on a dessert of pain d’épices, yogurt, a purée of taro flavored with sweetened condensed milk and lychee ice spirals.

The ice spirals are made by mixing juiced lychee with salt, sugar, citric acid and agar-agar and then spreading that gel on acetate rolls and freezing it.

Some chefs are finding more straightforward uses for vinegar powder.

Kristine Subido, chef of Wave restaurant in Chicago, uses it as a marinade ingredient and also uses it to flavor the potato chips in her fish and chips dish.

“It’s something that I need to make sure the sous chefs take care of instead of the line cooks, because it’s such a strong flavor,” she says.

She makes the dish with grouper and serves the fish with three sauces—crème fraîche tartar sauce with preserved lemon, harissa honey and grilled onion mignonette sauce. She also makes potato chips with the fish instead of the more traditional French fries.

She uses a powdered malt vinegar mixed with sea salt to dust her Yukon gold potato chips, which of course would get soggy if she used regular malt vinegar.

“Using the powder, you get that flavor without sacrificing texture,” she says. She also adds dry vinegar to tartare and poke, a Hawaiian fish preparation.

In addition to the amber-colored malt vinegar powder, she also uses a darker, balsamic powder, which has a more robust flavor that she likes as a dry rub for grilled chicken and steak. She buys both powders online.