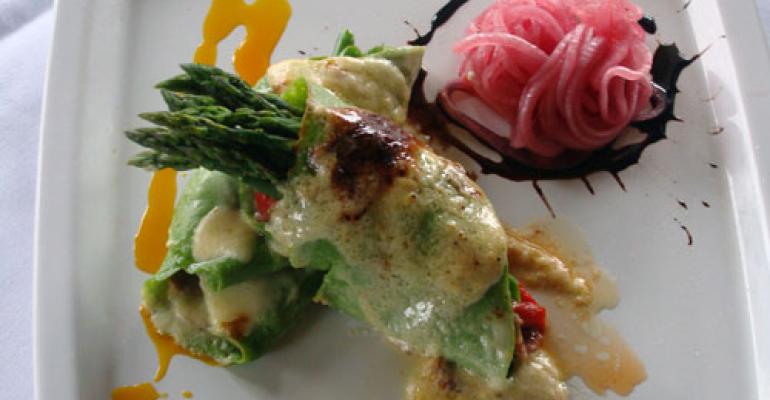 Chefs cook up versatile crêpes to stretch ingredients across dayparts

After working as a pastry chef for 16 years, Jehnee Rains thought it was time to open her own business, but in these economic times limiting herself to selling dessert seemed like a bad idea.

So she opened a crêperie.

Quick and inexpensive, with French cachet but not French snobbery, these thin, versatile pancakes can be savory or sweet, hand-held or eaten with a knife and fork, and served for breakfast, lunch, dinner or a snack.

And since crêpes are stuffed, they can be a nice way to use up trim from other items.

Since Rains opened Suzette Crêperie and Dessert Café about a year and a half ago, she found that different types of crêpes sell at different times of day, with customers buying savory versions at lunch and dinner, and dessert ones late at night and at brunch.

Also popular is her weekend special: a crêpe with an over-easy egg on top, stuffed with either prosciutto, Gruyère and caramelized onion, or sautéed mushroom with goat cheese and cream of mushroom soup.

Those come with a French almond tea cake and a mimosa, or coffee and orange juice, for $12.

Rains cooks the sweet and savory crêpes differently. The savory ones are made more like a classic galette, with hearty buckwheat flour, on a large professional griddle. The more delicate sweet ones, made simply with all-purpose flour, milk, eggs and butter, are made in small crêpe pans on a stovetop.

“I like the process of making them, so it’s really self-indulgent for me,” said Heather Carlucci-Rodriguez, chef of Print in New York City. “I like the rhythm of it all and the immediate success. A twirl, a flip, and it’s off.”

Carlucci-Rodriguez makes a version that’s sort of an interpretation of a cannoli. She fills it with ricotta, chocolate and candied Meyer lemon and tangerine. She serves it with sauce made by cooking figs in Port with vanilla and sometimes a little orange juice.

James Sleeth, the chef of Mignon in Plano, Texas, said his seafood crêpes are made from shrimp and the trimmings of other seafood, which he sautés with garlic and shallots, adding white wine, cream, lemon juice, a couple of confit tomatoes and spinach. He serves the crêpes with avocado and hollandaise sauce for $15, accompanied with potatoes at brunch and a mixed green salad with mustard vinaigrette at other times of day.

Though crêpes can be a way to use up scrap, J.J. Kingery, chef of the three-unit Wild Eggs chain in Louisville, Ky., noted that their food cost isn’t necessarily low.

He offers two crêpes, both filled with sweetened cream cheese and topped with whipped cream, powdered sugar and cinnamon. One also has an apple-bourbon compote, candied pecans and bourbon vanilla sorghum and sells for $9.99, and the other, $7.99, has wild berry compote and blueberry sorghum.

“We wanted something that was a little bit of a lighter option because our pancakes are very large and fluffy,” he said.

But customers complained that they weren’t substantial enough, so he added fresh blueberries and fresh diced apples to them.

The result was higher food cost but also a much better reception from customers.

“An ounce and a half of blueberries is probably 50 or 55 cents, but we want to err on the side of the customer,” Kingery said.

He added, however, that the apple crêpes were $2 more because the sauce is made by cooking down a lot of Granny Smith apples with water, sugar, lemon, vanilla, kosher salt and cinnamon, and then finishing it with bourbon, which he flames before adding the diced apples to it.

The crêpes at Trax Restaurant & Café in Amber, Pa., were invented because Steven Waxman had too much spinach on his hands.

He decided to blanch it and add it to crêpe batter and then roll it around asparagus, prosciutto and sweet bell pepper. He tops that with a Mornay sauce and lets it caramelize — either under a salamander or in the oven.

“The Mornay gives it a nice caramelized color that contrasts with the green and yellow in the crêpe,” he said.