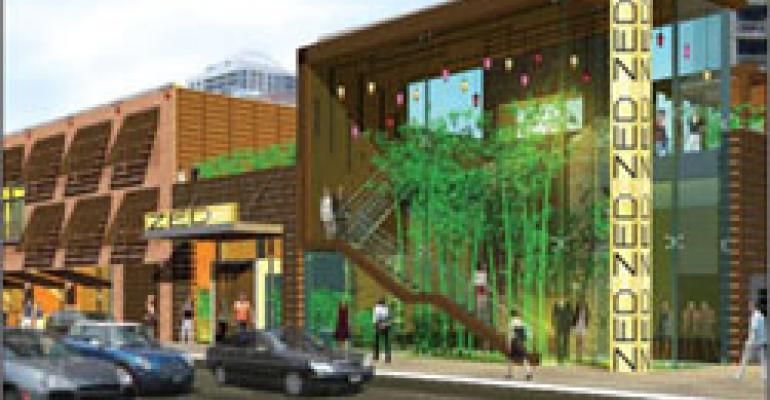 At the new ZED451 in Chicago, chef-servers offer grilled meats to guests at tables, then return to a blazing, charcoal-fueled fire pit that is the main cooking medium and focal point of the dining room. It’s an upscale-casual dining experience company officials liken to a dinner party at the home of a culinarily skilled host.

If that style of service hints of a Brazilian churrascaria, typified by gaucho-clad servers carving meat on swords in the dining room, it’s no coincidence. Parent Tavistock Restaurants, an Emeryville, Calif.-based multiconcept operator with seven brands and a total of 39 restaurants, formerly ran a trio of Sale Carvao churrascarias in the Chicago market. Although it converted the two suburban units to the ZED451 concept last year, the downtown location is the first real expansion prototype. Additional units are planned for Boca Raton, Fla., later this year and Orlando, Fla., in 2009.

However, company officials insisted that churrascaria is a minor point of departure for a much more elaborate and original concept.

“We’re not trying to be derivative of anything,” said Tavistock chief operating officer Daniel Harf. “We looked at every dining experience, including home dining, to put together what we believe is a better delivery system than what the normal restaurant provides.”

Tavistock spent $6 million to $7 million to make a showplace of the two-story, 18,000-square-foot, 300-seat space. Designer Chris Smith’s interior highlights natural stone and wood and includes a glass-enclosed wine room and 12-seat wine bar. A rooftop garden has a fireplace, domed skylight, water elements, and natural grass and foliage. The restaurant was slated to open April 22.

A hallmark is the team of 12 to 20 chefs that prepares meats, poultry, fish, game and vegetables over the central fire pit. They also serve the items. The $49.50 per person, all-you-can-eat dinner offerings include buttermilk-marinated bottom sirloin, chicken marinated in chimichurri, and wild boar with five-spice and ginger glaze, said corporate chef John Radcliff.

The 22-foot-long charcoal fire pit, custom made in Brazil, is the workhorse piece of cooking equipment. Giving guests a clear view of the open flame is a major hook of the concept, which according to Tavistock is named for the British pronunciation of the letter “z” and the temperature in degrees Fahrenheit at which combustion occurs.

The “pretty prep,” as Harf put it, such as tossing salads and assembling desserts, is done in plain view in the large open kitchen. Mundane tasks are handled out of sight in a small support kitchen.

Guests help themselves to salads, breads, cheeses and charcuterie at five “harvest tables” in the center of the dining room. Platters of cold food are chilled in refrigerated wells. They sit atop white marble inserts that freeze over with a thin layer of ice, so they hold a constant temperature and there is no melt water to drain. Soup pots are kept warm over induction heaters in stainless-steel wells filled with stones.

When guests finish with the preliminary items, they place a river stone by their plates, signaling to the chef-servers to bring on the main courses.

“If you came to my house, I would cook for you,” Harf said. “You can sample whatever you like and have as much as you like. That’s pretty much the vision.”