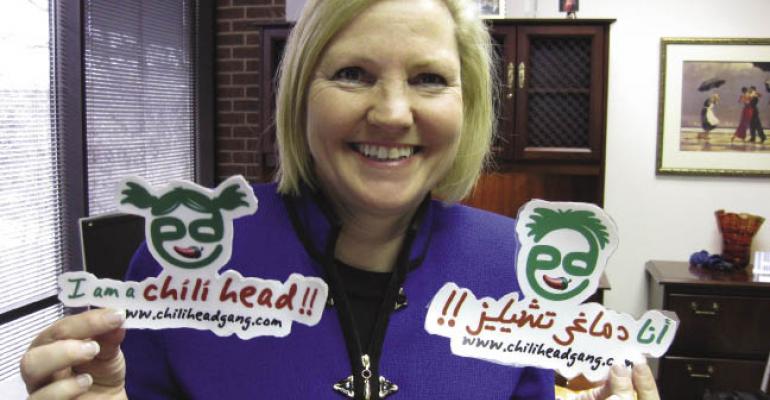 Political unrest in Egypt may have forced Hardee’s to close 32 stores temporarily in that country, but it failed to dampen the enthusiasm of U.S. restaurant companies looking to open abroad.  Given a mature market at home and a hearty appetite for Western brands overseas, operators are figuring out how to navigate the political and cultural hurdles in pursuit of growth.

“There’s risk anywhere you go,” said Carin Stutz, president of global business development for Brinker International Inc. of Dallas, which in the past year has focused overseas for the growth of its Chili’s Grill & Bar concept. “There’s risk here in the States,” she added.

Managing that risk is the key, say operators, most of whom turn to local partners to ease their immersion into new nations.

Already this year The Cheesecake Factory announced it would head overseas for the first time through a licensing agreement in the Middle East. Quizno’s said it would be franchising for the first time in India. Naked Pizza of New Orleans opened its slightly abridged N_K_D Pizza unit in Dubai, United Arab Emirates. And Yum! Brands Inc., parent of KFC, Pizza Hut and Taco Bell, said 80 percent of the 900 restaurants it plans to add in 2011 would be in emerging markets. Yum even began reporting “emerging markets” as a separate division in its quarterly financial results. In addition, Yum’s China division is expected to add as many as 600 more restaurants this year.

But global growth has an underbelly of unease.

Chili’s partner in Egypt earlier this month had to close seven of its 17 units in that North African nation during the political protests, while operating the remaining 10 under restricted curfew hours. The incidents, however, did little to cool Brinker’s enthusiasm, and the company plans to keep moving forward.

“We have a very successful business in Egypt,” Stutz said.

At the same time the Egyptian restaurants were temporarily closed, Brinker opened in Moscow the first of a planned 25 Chili’s units in Russia. Chili’s now has 224 units in 30 foreign nations and two U.S. territories. At the end of its last quarter, Brinker had 1,295 Chili’s and 44 Maggiano’s Little Italy units in the United States.

International development “is definitely the growth vehicle for Brinker at this time and for the foreseeable future,” said Stutz. “We see great opportunity for expansion. We see the growing middle class in a lot of the countries out there that are really ripe for the casual-dining experience.

“The Western brands have been very, very popular,” she continued. “We really see a lot of brand consciousness and status attached to American brands in these countries.”

One of the pioneers in international expansion was Hard Rock Cafe, owned by Hard Rock International of Orlando, Fla., which has 134 cafes in 52 nations as well as 15 hotel-resort-casinos around the globe.

“There are three regional blocks that we are looking at at the moment: Asian, Eastern European and South American,” he said during the opening of a new resort-casino in Punta Cana, Dominican Republic.

“However, outside those big blocks there are still what I would call great pockets of opportunity for us as a brand,” he said. “We are starting to look at other interesting places. We’re looking at Outer Mongolia, something in Ulaanbaatar. This year we are opening in Angola, in Luanda. We’re looking at Lagos in Nigeria. We’re looking at Nairobi, [Kenya].”

The process of finding international partners varies widely depending on the country and the sophistication of the country’s restaurant industry, Dodds said.

“I could look at one country and come up with two solutions,” he said. “We could find a partner who is an accomplished restaurant operator and has all the systems, procedures, people, etc., and could add a [Hard Rock] Cafe onto their operations and enjoy immediate efficiencies.

“Or I could approach that same opportunity with an entrepreneur who is going to put his own life and blood and effort and sweat into it, … and be Mr. Hard Rock in city X,” he continued. “We don’t try to have one approach. For us, balancing partner choice and location is important.”

“The partners we want to associate with are those who have a brand orientation and understand brand management and have the capacity to manage a complex business like Hard Rock and have the financial means to do that successfully,” he said.

Denver-based Quiznos plans to develop five Quiznos locations in India by the end of the year, the first of which is to open in May, through a master franchise agreement.

The company is working with an established southern India restaurant franchisee, Arjun Valluri. Vala added that the company is targeting development in Central and South America, Europe, the Middle East and Southeast Asia.

International franchisees of U.S. brands are themselves developing extensive businesses. The Financial Times reported earlier this month that Arcos Dorados, the largest global franchisee of McDonald’s, was preparing an initial public offering and a listing on U.S. stock exchanges.

And the Middle East continues to attract U.S. restaurant brands.

The Cheesecake Factory said it has signed an agreement with the Kuwait-based Alshaya Group, which plans to open as many as 22 locations of the chain in the United Arab Emirates, Kuwait, Bahrain, Qatar and Saudi Arabia. The agreement also includes the opportunity to add other markets in the Middle East, North Africa, Central and Eastern Europe, Russia, and Turkey.

For its expansion in Russia, Brinker partnered with a real estate investor and a restaurant operator.

“We’re fairly selective about the partners that we want to bring on board,” Stutz said. “We love it if they have restaurant operations experience. That’s very important for us; it’s a long distance to manage a brand. If not, we want to make sure they have a strong operator locked into the business.”

And while the company ramps up for its second opening in Moscow in July, it is looking to other areas for development, including Brazil, India, Latin America and the Middle East.

“Anytime you enter a market,” Stutz said, “scalability is really important. A flag-planting strategy is not the way to go. You have to get critical mass in a market to have a reliable supply chain so you can deliver the quality that your brand demands.”

A brand also has to adapt to local tastes. Chili’s in Moscow, for example, offers bottle service of vodka.