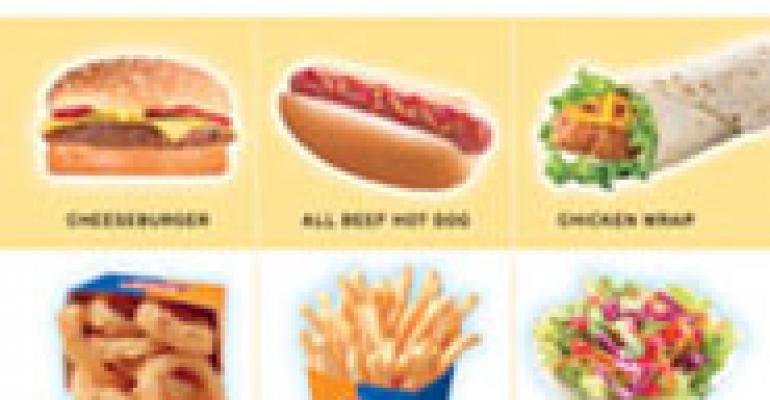 Dairy Queen’s Sweet Deals value menu may be rolling out nationally just in time to fight the recession, but it’s hardly a knee-jerk reaction to economic pressure, according to officials. The chain began testing the offer in 2007, before the downturn hit, said Michael Keller, chief brand officer, who was worried even then about DQ’s value proposition.

“I didn’t get it,” Keller said. “Guests liked our food, but why didn’t they visit us as often as they did some of our competitors? It was about barriers to repeat purchase, and one of those was value.”

As officials at Dairy Queen and other chains have realized, protecting margins and cutting prices aren’t the only considerations when executing value menus or combo deals. In this economy, brand perception also plays a key role in the decision to unveil one or the other—and can prove a hurdle in the race to appeal to consumers’ sense of value.

DQ’s response to the value question is Sweet Deals, which will become a permanent menu beginning March 1 at 2,323 restaurants in the United States and 400 in Canada. The tiered offering lets customers buy two items for $3, three for $4 and four for $5. The nine menu items include a cheeseburger, hot dog, chicken wrap, fries, onion rings, side salad and a medium beverage, as well as a small soft-serve sundae or cone.

“The tiered pricing structure put us in a situation where margins per transaction were favorable to that of a dollar menu,” Keller said.

So far value deals have produced mixed results for companies in terms of enhancing their value perceptions, according to recent research from New York-based BrandIndex, a firm that tracks consumer perceptions. BrandIndex scores are calculated by subtracting the percentage of consumers rating a brand negatively from the percentage of consumers rating a brand positively. Dairy Queen and Sonic, which rolled out its Everyday Value Menu late last year, have fared best in terms of value scores among chains touting a new money-saving focus.

DQ has a 34.4 BrandIndex rating for value for 2009 year-to-date, up 1.7 percentage points from the fourth quarter of 2008. Keller said Sweet Deals already accounts for an average of 7 percent of sales in test markets, and the menu could add between 2 percent and 3 percent to same-store sales this year. Companywide sales were up 3 percent in 2008, he said, and are up another 3 percent year-to-date in 2009.

Sonic has a 22.7 BrandIndex rating, up 3.6 percentage points from last year’s fourth quarter.

By contrast, KFC’s 2009 year-to-date rating is 10.6, down 3.1 points from 2008’s fourth quarter, though the data do not reflect the chain’s most recent value initiatives: the just-begun “Unbeatable Feast” combo deal and Ultimate Value Menu. The same is probably true for Starbucks, which will begin its $3.95 “breakfast pairings” March 3 and has the highest hurdle to clear in terms of brand perception. Starbucks’ year-to-date BrandIndex rating fell to -30.8, from -25.3 in 2008’s fourth quarter.

“There are a couple kinds of value,” said Rick Maynard, KFC’s public relations manager. “There’s a value menu for lunch customers and snackers, and then there’s family value, which is a big part of our business.”

The value menu was tested for about a year in the Los Angeles market, Maynard said.

Qdoba Mexican Grill, which BrandIndex does not track, opted to test a combo deal, which bundles any of Qdoba’s 18 chicken entrées with chips and salsa and a drink for $6.99, a savings of about 20 percent. The combo, currently in test in 22 states, was meant to maintain operational flexibility and the brand’s image, said David Craven, director of marketing.

“Once you introduce a value menu, it’s difficult to repeal that,” Craven said. “We are doing this for a limited time. We felt that the program we put in place lends itself easily to withdrawing, [more] than the introduction of a full value menu.

“We in no way wanted…to give the perception that customers weren’t getting the quality and portion sizes that they’re used to getting from Qdoba.”

Alisa Martinez, spokeswoman for Starbucks, also said a bundled deal was more brand-appropriate than a value menu. The chain’s breakfast pairings will sell a tall latte with either oatmeal or cinnamon-swirl coffee cake, and a tall brewed coffee with one of three breakfast sandwiches.

The breakfast pairings bolster Starbucks’ reputation as an “affordable luxury” because it shows the brand listens to its customers, offering popular items for a savings of as much as $1.70 per pairing, Martinez said.

“It wasn’t a matter of trying to upsize somebody or sell them something they don’t necessarily want,” she said. “The pairings are our top sellers, so we’re extending to our regular customers the price break.”

Dairy Queen’s Keller said value menus work better for his brand and quick-service competitors because they typically are not associated with higher price points found at fast-casual chains or coffeehouses. Sweet Deals’ hybrid approach, offering several items from a value menu but in thousands of possible combinations, reflects consumers’ need for control over how much they spend and subsequently save, he added.

Quick-service brands also are more likely to have a broader food offering, Keller said, making value menus a natural way to put a value proposition in front of a customer looking for price relief and possibly trading down from fast casual or casual dining.

“The tricky thing now is that the lines are blurring,” he said. “Consumers are choosing across categories now.”