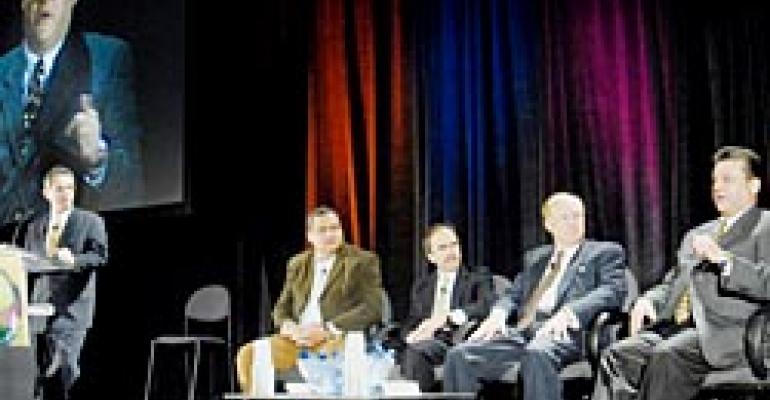 ATLANTA Concerned that its speed of service was putting it at a disadvantage compared with quick-service rivals, 400-unit, fast-casual Zaxby's turned for help to next-generation drive-thru timers integrated with the point-of-sale, or POS, system.

"We've lowered drive-thru times 33 percent in one calendar year," Baxley reported during the "Feedback from the Top: CEO/COO Panel" at FS/TEC 2007 in Atlanta. "We always had the high-quality [food] expected by guests at a fast-casual chain, but our speed of service lagged behind traditional fast-food operators. Now we feel that we are competitive."

Greco said his company's 269-unit Bruegger's Bagel Bakery chain recently rolled out a new POS system. The POS project, which took about a year, enabled the chain to collect data more efficiently and in ways it couldn't before.

Bruegger's, Greco said, also had a computer-based site-selection model created to help it identify the best locations for new units.

"We would look at a return on investment for tech as similar to any other capital project," Greco explained, indicating that the norm would be a targeted "15 [percent] to 20 percent [ROI] with a three- to four-year payback."

Baxley said technology investment decisions at Zaxby's center around the answers to these three questions: "1. Does it add to the bottom line? 2. Will it enhance the guest experience? and 3. Does it enhance the work environment ... and give the tools and skills employees need?"

Grimes, of Capitol Fresh, said his pre-investment questions include these: "What will it do for the business today?" and "Is this a strategic move to impact the customer's experience?"

Desirable technology, Grimes said, is in keeping with trends, not fads, and, if aimed at guests, should "increase customer count and time spent in the restaurant."

Foodservice chief information officers, or CIOs, must "focus on the core technology [needed] to run the business," Grimes said, adding that he outsources anything not core to his business, such as email and phones.

Pittard said a new CIO could expect to spend his first day at Rubio's reviewing the company's overall strategy and identifying key areas that may be enabled through the use of technology.

"I am fortunate because I have a [IT] person that comes to me with ideas, and he thinks outside the box," Zaxby's Baxley said.

Discussing where operators should or shouldn't employ technology, Grimes said: "Technology is the enabler, not the thing that runs our business. Yet it is going into every facet of the environment, including the restroom, [where] sinks [can] let you know whether employees have washed their hands or not."

Greco said technology can benefit most areas, particularly back-office operations like scheduling and purchasing. "Technology is about providing information, so it can make you more efficient in terms of seeing where costs are higher than they should be," he said.

Still, the Bruegger's executive acknowledged that he is not certain the "next generation" of technology always has a payoff. He added, "We are constantly focused on five- to seven-year life spans for software, but it is not always an improvement that justifies its expense."

Baxley said that when deploying technology, operators first should ask if employees are ready for it and if the hardware or software has the potential to adversely impact the guest experience? "Sometimes it gets a little out of hand," he said.

Touching on ambience, Pittard advised FS/TEC attendees to "make sure [new technology] blends with what you want to project."

All four of the panelists said they were considering new ways to train.

Grimes said he is looking at online training to give employees flexibility related to when and where they train and to provide his company with a way to track individual training progress.

Greco said training at Bruegger's is Internet-based and developed in-house. "We also participate in programs by the Elliot Institute," he said.

Baxley said his company's Internet-based training now is used primarily by store-level managers. "It is lots of fun and games and focuses on how the adult mind learns and absorbs information," he said of the materials being provided to that group.

According to Pittard of Rubio's, "The cost of technology has plummeted over the last few years, so we can have interactive training with live instruction. That is the way of training for the future."