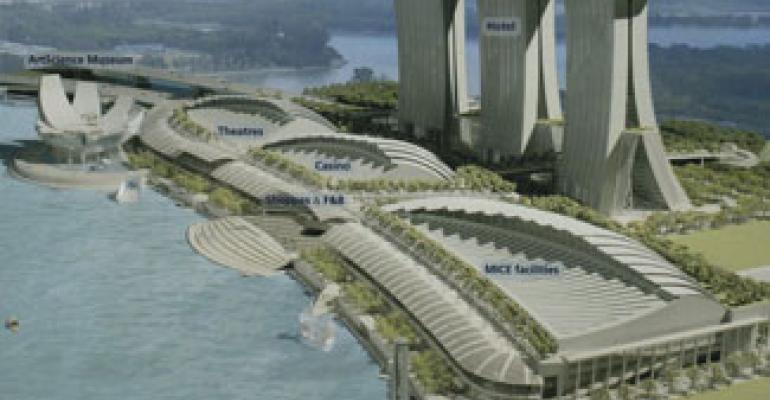 The other chefs who will open restaurants at the resort include Guy Savoy of Paris, Santi Santamaria of Barcelona and Tetsuya Wakuda of Sydney, the resort's developers said Friday.

"Singapore will become the culinary epicenter of Asia," said Thomas Arasi, president and chief executive of Marina Bay Sands. "The quality of these six chefs will make Marina Bay Sands a dining experience that is beyond comparison."

In addition to the high-end restaurants, the Marina Bay Sands, once completed, will include a convention center, a casino, two theaters, a shopping mall, a museum, 2,500 luxury hotel rooms and a "SkyPark" that will rest on top of three 55-story hotel towers.

Michael Leven, president and chief operating officer of the Las Vegas Sands Corp., one of the developers of the Marina Bay Sands, said the SkyPark is the length of four football fields and will include a special events restaurant in addition to an infinity-style pool. The resort also will feature banquet facilities that will accommodate up to 6,600 diners, he said.

Boulud will open his third outpost of DB Bistro Moderne at the Marina Bay Sands. He said the restaurant would be “a partnership with someone who will finance the build-out,” though he will co-manage the 120-seat French-American bistro.

The Singapore restaurant will be Boulud's second in Asia, where he also has Maison Boulud in Beijing. The restaurant will mark his 11th restaurant overall, though he recently announced in his blog that he would shutter his Las Vegas restaurant when the lease runs out next spring. That restaurant was in partnership with Steve Wynn at the Wynn Las Vegas Resort and Country Club.