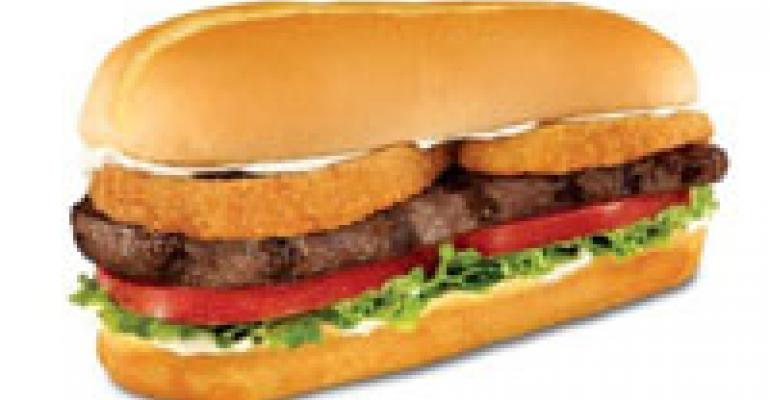 CARPINTERIA Calif. Continuing its emphasis on premium menu items, the Carl’s Jr. chain on Wednesday debuted a new Charbroiled Steak Sandwich along with an advertising campaign promoting the meal as part of a “frugally fancy” night out.

The sandwich includes a sirloin steak topped with breaded onion rings, lettuce, tomato and mayonnaise on a toasted steak roll for a suggested $4.69 by itself or $7.19 with Natural-Cut Fries and a drink.

“In this economy, it’s understandable that guys would want to watch what they spend,” said Brad Haley, Carl’s Jr.'s executive vice president of marketing. “So we’re giving them the opportunity to do just that with the new Charbroiled Steak Sandwich. It isn’t cheap, low-quality, value-menu fare, like most of our competitors are pimping right now, but it does represent a great value for a big piece of steak compared to what guys would pay almost anywhere else.”

Carl’s Jr. is marketing the meal as “the way guys do fancy.” In 30-second and 15-second ads titled “Going Out,” a casually dressed man and his gussied-up date have a differing view of where they are going for a “steak dinner.” Click here to watch one of the commercials.

The 1,170-unit Carl’s Jr. chain is operated and franchised by CKE Restaurants Inc., which is also parent to the 1,917-unit Hardee’s chain.