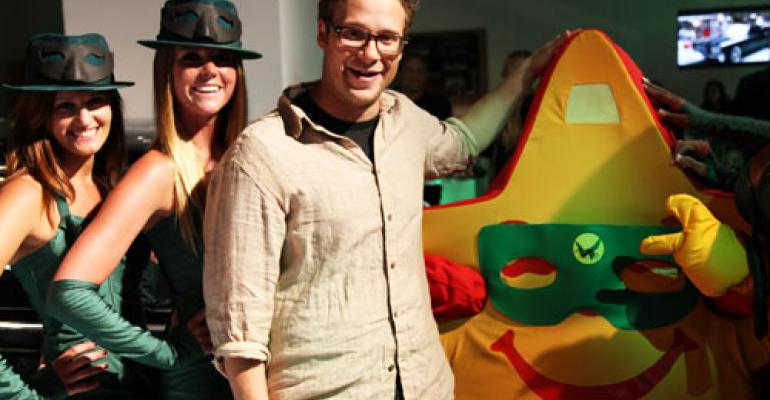 The Carl’s Jr. and Hardee’s quick-service chains are planning to launch a multifaceted promotion in mid-November tied to the release of the action-comedy film “The Green Hornet,” starring Seth Rogen.

After catering a party promoting the film at the annual Comic-Con event in San Diego last week, officials from the chains' parent company, CKE Restaurants Inc., announced the sponsorship relationship with Sony’s Columbia Pictures, which is scheduled to release the film in January.

The movie, which was co-written by Rogen, tells the story of the comic book character, Britt Reid (Rogen), a party boy who inherits a newspaper publishing empire after his father dies. He also inherits the mysterious employee Kato, played by Jay Chou, whose martial arts skills inspire Reid to become a masked vigilante who drives a 1965 Chrysler Imperial Crown dubbed the “Black Beauty.”

Carl’s Jr. and Hardee’s products will appear in the film, and Rogen and Chou will be featured in a commercial for the quick-service chains to promote a movie-related limited-time offer on the menu. The commercial will air in November.

Brad Haley, executive vice president of marketing for Carpinteria, Calif.-based CKE, said he could not yet reveal the menu item that will be tied to the film.

The restaurants, however, will be offering movie-related toys with kids' meals and for sale at the restaurants, such as a keychain with a mini Black Beauty for $1.99, which will also come with a coupon book offering $75 worth of discounts on food or Sony products, such as a PlayStation.

The promotion will also include a sweepstakes for various prizes, including a chance to win a real Chrysler Imperial, Haley said.

The “Green Hornet” is not the first comic book character CKE has aligned itself with. In 2000, Carl's Jr. and Hardee's did promotions related to the original “Spider-Man” movie in 2000 as well as the action-vampire film “Van Helsing” in 2004.