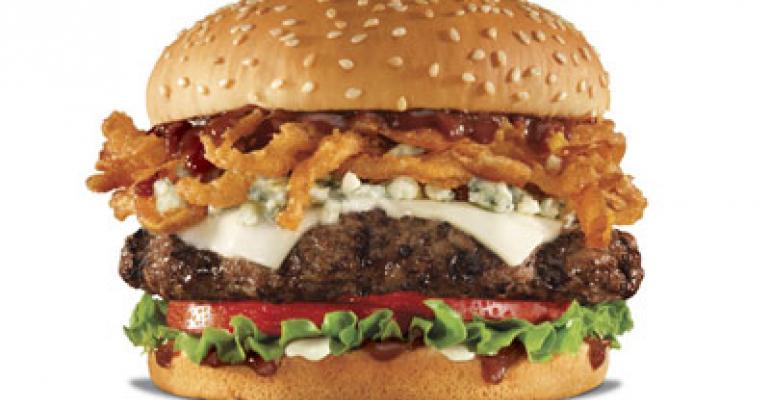 Brad Haley, chief marketing officer for Carl’s Jr. and Hardee’s parent CKE Restaurants Inc., said in a statement that the chains have been offering “sit-down quality” burgers for years now, “but this one really ups the ante.”

The company has tested burgers with the various toppings in the past, but none reached the level required for a nationwide launch, he said.

“It wasn’t until we ran across a burger in a steakhouse with all three toppings [A1 Steak Sauce, blue cheese and onion rings] combined that we knew we had found it,” Haley said. “In fact, the resulting new Steakhouse Burgers garnered the highest consumer research scores we’ve ever seen in a test market.”

The Steakhouse Burger is also the first new beef product to be introduced at either chain in 2011, following the earlier debut of hand-breaded chicken tenders and new turkey burgers.

CKE’s advertising agency, David & Goliath, thought the Steakhouse Burger was so good, it “tasted like they were made by the god of hamburgers,” a notion that has become the theme of an advertising campaign.

In television commercials, “Hamblor,” the mythical god of hamburgers, demonstrates how he makes the Steakhouse Burgers in his fabled kingdom, with “adoring” and scantily clad goddesses by his side, along with his trusty St. Bernard dog, who carries a cask of A1 sauce.

The campaign will include a digital sweepstakes starting Sept. 26 on Facebook, and the brands will feature gift cards and movie merchandise from the film “Immortals,” including the chance to win a trip for two to the Hollywood premier in November.

For a limited time, 15-ounce retail bottles of A1 Steak Sauce also will feature the Steakhouse Burgers on the label with a link to a $1 coupon for a combo at Hardee’s or Carl’s Jr.