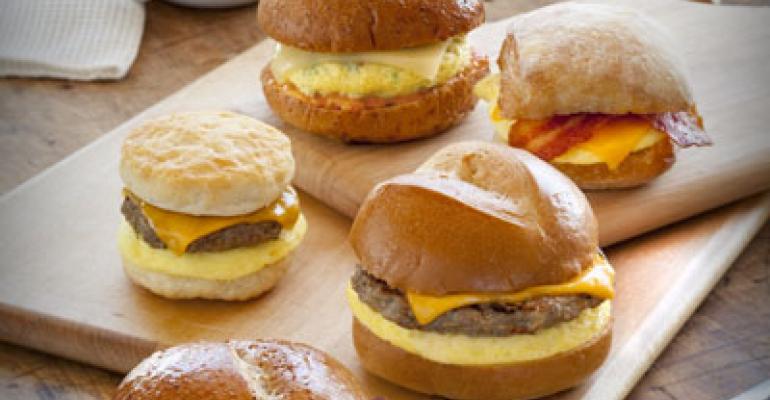 Coffeehouse chain looks beyond the morning with plans for lunch, snack items

Chief executive Mike Tattersfield said a new line of breakfast sandwiches, which debuted in January and are now in 80 percent of stores, were the largest driver of a 4.3-percent increase in same-store sales for the quarter.

“Our breakfast sandwich platform is living up to our high expectations and is a critical component of expanding our guests’ perceptions of Caribou Coffee,” he said during the call with analysts Thursday. “We now have more food offerings worthy of being matched with our consistently high-quality beverages, and expect that breakfast sandwiches will continue to be accretive to our quarterly performance throughout 2011.”

During a previous conference call, Caribou had reported that food items like oatmeal, breakfast sandwiches and baked goods were achieving an 18-percent attachment rate, and Tattersfield updated analysts in the first-quarter call that the incidence of food purchases had trended upward to 24 percent of visits.

“Our goal was to get to 30 percent,” he said, “so we’re getting some good traction along that way, and it’s a continual drive for us. If we focus on the right initiatives, not just in a breakfast or lunch daypart but also in snacks and other opportunities that the guest is looking for, then I ultimately believe we build to that 30 percent, but over longer than the 2011 time frame.”

For the April 3-ended quarter, Caribou’s net income grew to $1.6 million, or 8 cents per share, from $500,000, or 3 cents a share, a year earlier. Total revenue rose 7.8 percent to $72.3 million, reflecting the 4.3-percent gain in same-store sales, a 30-percent increase in commercial sales to $11.7 million, and a 22-percent increase in franchise revenue. Caribou’s $3 million in revenue from 135 franchise locations took into account increased sales and royalties and 12 additional units compared with the first quarter of last year.

Highlights from the call:

Caribou is building on investments in ovens for breakfast sandwiches by testing warm lunch sandwiches in approximately 30 stores in Minnesota and Chicago. The platform is set around a “grown-up grilled cheese” theme, and is receiving enthusiastic feedback from customers and employees, Tattersfield said.

Caribou also launched in the first quarter its Northern Lites beverage line, which has 40 percent fewer calories than the chain’s regular mocha and iced-mocha drinks. Both the low-calorie drinks and the lunch sandwiches are meant to be the precursor to further expansion into dayparts beyond morning coffee, the company said.

Tattersfield added that new products are on deck for summer and fall of this year. In 2012, bakery items will be a focus, specifically on indulgent items that play well in evening snack periods, he said.

He said lunch sandwiches may not add incremental sales to the level of breakfast sandwiches, which benefit from Caribou’s normal traffic of habitual coffee customers. However, the lunch sandwiches are meant to be the first product in a long-term daypart expansion plan for the afternoon, he added.

“We do see that the breakfast sandwiches, in the majority of our daypart when people are used to using Caribou in that way, will have a bigger component of driving more sandwich volume than the lunch,” he said. “But over time the lunch platform will start with the sandwich, but you’ll see us continue to look at bakery improvements … which will be a big part of 2012.

Caribou’s coffee costs are locked in through 2011 at a 25-percent premium over 2010’s prices. Chief financial officer Tim Hennessy said a menu price increase taken at the end of last year of slightly more than 1 percent on the coffeehouse side was in line with competitors and was conducted on a market-by-market basis, chief financial officer Tim Hennessy said.

Caribou said it increased prices 8 percent to 10 percent in its consumer packaged-goods business. Further CPG price increases have yet to be determined, Hennessy said.

“We’re not price leaders in CPG; we follow,” he said. “If our peers move, we’ll play that out much like this first quarter.”

Caribou typically takes a small amount of price toward the end of most years, Hennessy said, and the chain would have further maneuverability later in the year if necessary.

“The one benefit that we’ve been able to see is the pricing activities we’ve been able to take we’ve seen stick,” Tattersfield said. “A lot is about introducing product innovation, which consumers will continue to look at and will bring a lot of value for them. So it’s a combination. I can’t predict where the price of coffee is going to be; it’s bouncing around even today. But we plan on being very proactive as to how we manage that.”

Caribou remains on track to open 10 coffeehouses this year, Tattersfield said, with locations in Minnesota and Chicago set to debut first. “Across our entire organization, we’re excited for this growth lever to kick in,” he said.

Rents have been fairly flat this year, even at “A” locations Caribou has been pursuing, he said.

“What gives us a lot more confidence is … building a pipeline for 2012 and really locking that in up front,” Tattersfield said. “We’ve said we’d like to do 20 to 25 stores next year to ultimately get us by 2013 to 8 percent to 10 percent growth on a yearly basis. We’ve been able to already lock in roughly 20 percent to 30 percent of our pipeline for 2012.”

Caribou also reconfirmed its 2011 fiscal guidance of sales growth between 7 percent and 9 percent, assuming same-store sales growth of 3 percent to 5 percent. The company also set an earnings per share target of 35 cents to 37 cents for the year.

Minneapolis-based Caribou Coffee operates 409 coffeehouses and franchises another 135 locations in 20 states, the District of Columbia and nine international markets.