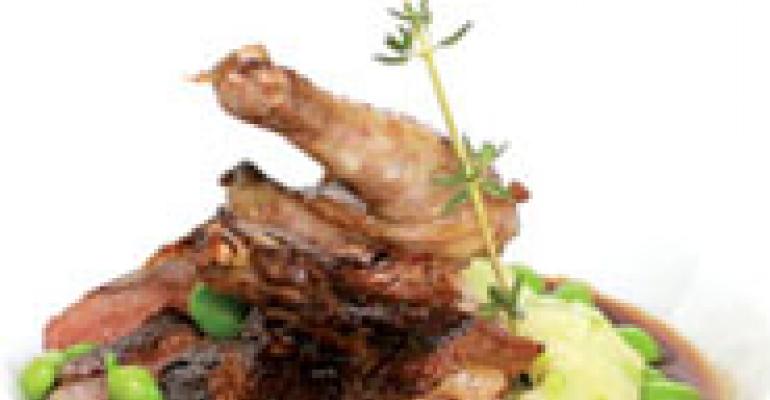 When chef Akhtar Nawab was developing his new restaurant in Manhattan, he wanted to call it Ela, after an Indian word for the cardamom plant, as a reference to the Indian heritage of both the American-born chef and the prized South Asian spice. But the name was already taken, so they changed it to Elettaria—cardamom in Latin.

Not surprisingly, at Nawab’s restaurant the spice is all over the menu. He coats sweet-breads with cardamom-scented flour before sautéing them in butter and serving them with pineapple chunks poached in cardamom- and vanilla-scented juice. He makes a cardamom rasmalai, a kind of fresh cheese poached in reduced, sweetened, cardamom-scented milk. His bartender has even concocted a cocktail, the “8th Wonder,” with cardamom-infused bourbon, lemon juice, sweet vermouth and soda.

It seems Nawab’s not the only chef intrigued by the spice, which is appearing on menus nationwide.

The spice may be native to southern India, but the world’s largest exporter of cardamom is now Guatemala. The United States imports almost all of its cardamom from Central America.

“We put it into meat stews, into rice pilafs,” says Avtar Walia, owner of Tamarind, an upscale Indian restaurant in New York.

A little of the ground spice is even sprinkled on a mango lassi, a chilled yogurt drink.

Cardamom is one of the classic ingredients in the sweet and spicy tea called chai masala in India. As chai has proliferated at upscale fast-food chain restaurants like Panera Bread and Starbucks, many Americans are consuming the spice without even knowing it. Starbucks’ chai lists cardamom as the first seasoning on a list that also includes cinnamon, ginger, star anise and black pepper.

Coffee also is combined often with cardamom, especially in the Middle East. There, roasted coffee beans are typically ground with a modest quantity of the spice to make so-called Turkish coffee. In parts of the Arabian Peninsula, a beverage is made by steeping ground unroasted coffee with an equal amount of crushed cardamom. As in India, the seasoning is an integral component in regional spice mixtures, such as Morocco’s ras el hanout.

The most common version of the spice is green cardamom, Elettaria cardamomum, sold in the form of pale green or bleached white pods, or as the black seeds of those pods. But there is also the unrelated black cardamom, Amomum subulatum, from North India, with its distinctive smoky, even resinous aroma.

Compared with green cardamom, he says, it is “a little bit less green, fruity and piney, a little bit more peppery.” He puts almost a half teaspoon of black cardamom into each of his six-ounce lamb burgers at Acme Burger.

In fact, the lamb burger is typically the best-selling item after the beef burger.

While cardamom is one of the most expensive spices on the market, typically four times as pricey as black pepper, black cardamom is considerably cheaper.

Yet even while American chefs use more cardamom and other exotic seasonings, they use them differently than cooks brought up on more traditionally spicy cuisines. While Indians and Moroccans usually blend six or more spices together, cooks here tend to focus on a particular flavor.

“I rarely combine more than two or three spices together,” says chef Daniel Bruce of Meritage restaurant in Boston.

He flavors tuna with a mixture of anise, cardamom and brown sugar, and seasons squab with a combination of cardamom and cumin. He also sprinkles cardamom on flat breads and skillet breads. Bruce also stirs it into an Italian-inflected dish of cardamom and butternut squash gnocchi and shredded duck confit.

At Charlie Trotter’s in Chicago, cardamom is paired with Mexican influences in an entrée of venison with black cardamom mole.

“We love it for its smokiness and depth of flavor,” says Matthias Merges, executive chef at Charlie Trotter’s.

In St. Louis, chef Claus Schmitz even uses black cardamom in barbecue. He has imported the classic Arabic flavor combination of coffee and cardamom to Mosaic restaurant in his cardamom and espresso smoked ribs.

Schmitz adds that he favors cardamom for its ability to smooth out other flavors. He also likes it in desserts like cardamom crème brûlée, which he says tastes almost like vanilla.

According to the U.S. Department of Agriculture, American spice consumption has increased by some 50 percent over the past decade. Cardamom import figures suggest that the use of that spice has risen even faster, more than doubling over the same period.

Daniel Bruce attributes the change to the Food Network and creative chefs. Others point to changing immigration patterns that have led to a proliferation of South Asian and Middle Eastern restaurants. Certainly, foreign travel has exposed many more to exotic flavors.

Tamarind’s Walia, for one, thinks the taste for the traditionally Indian spice is increasing is because Americans are visiting India more.

“In India, everywhere you go you see Americans, traveling and investing in India,” he says. “India is very hot.”