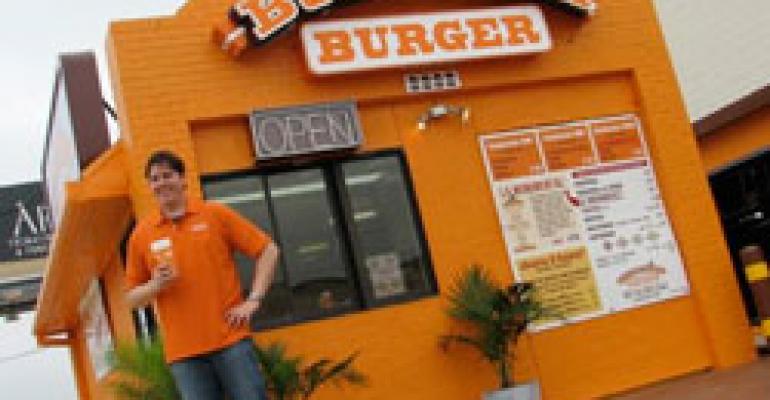 The burger takes a trip around the world

Hamburgers are hailed as the quintessential American food, but a struggle for differentiation is giving some of the newer versions a decidedly foreign accent.

U.S. restaurant chains have long tried to add an ethnic dash to their burger lineups by topping a patty with a few international elements and tagging the sandwich accordingly. Tomato sauce, pepperoni and fried mozzarella, for instance, figure heavily into Red Robin Gourmet Burger’s new Wise Guy Burger. The towering sandwich shares the menu with such ethnic nods as the teriyaki-flavored Banzai Burger.

But the prevalence of burgers on all types of menus, at all price levels, is leading some market newcomers to try versions with a more pronounced ethnic twist. Those touches range from the type of meat used to what’s included in the grind and how the sandwich is garnished.

Cat Cora’s new Greek burger, for instance, is made from lamb and dressed with feta cheese. Burguesa Burger’s signature La Monumental is garnished with ham, not bacon, as a burger often is in Central and South America. The Counter’s Kung Pao Shrimp Burger consists of grilled shrimp and a spicy sauce, packed into a bun.

“No one wants to menu a plain hamburger anymore,” said Jack Li, relevance strategist for the foodservice research firm Datassentials. “The pressure is to be more upscale, more unique. You want to put on something different, something very expensive, or something ethnic. It’s all part of the same trend.”

At the same time, he said, the public is less likely to balk at ethnic experimentation when a burger is the ticket into unknown culinary territory. Its familiarity counters the apprehension. “We haven’t heard yet of anything the market cannot absorb,” even with some of the ethnic variations that have recently appeared, he said.

Out-of-towners seeing the sights of Orlando, Fla., can now pop over to Disney’s Boardwalk for the exotic burger developed by Cora for Kouzzina, the celebrity chef’s first full-service restaurant. The restaurant reflects the TV star’s Greek heritage, as channeled through her Mississippi upbringing. Its Char-Grilled Lamb Burger sells for $15.99, including sweet potato fries.

In the Chicago suburb of Arlington Heights, Ill., shoppers at an Asian market can refuel with one of the 16 Japanese-style burgers offered by the food court’s Gabutto Burger. All but two are made with a patty of ground beef and pork mixed with breadcrumbs, with prices ranging from $3.65 to $4.45.

The hipsters of New York City’s West Village can now risk staining their black outfits by munching a burger of bulgogi, the marinated beef that figures heavily in Korean cooking. The pricey neighborhood’s New York Hot Dog & Coffee offers a version served with sliced raw cabbage for $6.49, or topped with the fiery, pickled version, kimchi, for $3.75.

Although Burguesa is aimed at the Latino market, a variety of customers are lining up at the Dallas prototype for the Mexican burgers, beverages and fries, said founder Jeff Sinelli. The 344-square-foot drive-thru and walk-up outlet is generating sales that should hit $500,000 annually, he said. A second outpost is slated to open this month in Irving, Texas, and a third is under development in McAllen, Texas.

“Differentiation — that is exactly what is happening,” said Datassential’s Li, whose job is to glean the trends from the company’s consumption research. “It’s not adding a cheeseburger. It’s entering the market with something with more distinction, [something] more identifiable.”

That assessment is echoed by Sinelli, whose earlier ventures included the Which Wich? sandwich concept and Genghis Grill Mongolian barbecue chain.

The Mexican communities of Dallas may not be familiar with a comparable sort of restaurant, Sinelli acknowledged. The authenticity, he says, comes in the use of ingredients like buns from Grupo Bimbo, Central and South America’s largest bakery and a company that appears often on soccer jerseys as a sponsor. Anyone from south of the U.S. border would recognize that brand as something from their heritage.

Similarly, he said, Burguesa features bottles rather than fountain-dispensed cups of soda, since that’s the customary way of having a soft drink in Mexico. Taxes are included in the listed prices, in deference to the Mexican custom of paying one set price, without add-ons. And the restaurant accepts pesos as well as dollars.

Among the concessions made to U.S. tastes are the style of fries, which Sinelli has changed three times in the months that the restaurant has been open, resulting in what he calls a “McDonald’s-esque” version.

In addition, La Monumental, the $5 premium burger that accounts for about half of Burguesa’s sales, is topped with strips of crunchy tostada. “That’s not done in Mexico, but a tostada is something you’d know from Mexico,” he said.

Datassential’s Li said the ethnic diversification of burgers follows the classic path for the introduction of new flavors or foods to the mainstream. Unfamiliar spices, ingredients or cooking styles are first paired with a comforting, familiar object and then gain acceptance in a wider array of executions.

In any case, he says, the trend fits a host of other indications that the burger boom is continuing.

“Burgers have been revitalized,” Li said, “and it’s still going on.”