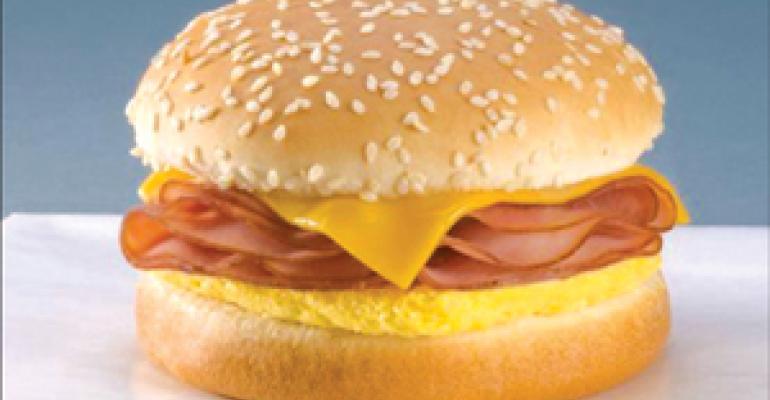 As the fast-food industry’s No. 2 and No. 3 burger brands strive to match the momentum of segment leader McDonald’s, the brain trust at Burger King is ordering the chain’s operators to keep later hours as one way to catch up.

In addition to ordering all franchisees to meet a May 10 deadline for extending business hours until at least midnight, Burger King is eyeing a possible chainwide rollout of a wrap-style sandwich later this year.

New operating, marketing and menu strategies are high on the agendas of both Burger King and Wendy’s as they seek to emulate McDonald’s ability to boost customer traffic, as reflected in comparisons of the chains’ first-quarter sales results. Wendy’s, whose same-store sales grew 3.7 percent, and Burger King, which notched a 3.2-percent same-store increase, including a 2.6 percent U.S. rise, both lagged McDonald’s, which generated a first-quarter same-store jump of 6.3 percent, though its U.S. growth was 4.4 percent.

Chief executive John Chidsey disclosed Burger King’s late-night initiative in a briefing of analysts and investors about first-quarter results and new marketing strategies. Currently, 60 percent of BK’s domestic system of more than 7,000 restaurants are open until at least midnight, but 100-percent compliance was needed to make the planned national advertising of late-night hours feasible, Chidsey said.

BK franchisees will be allowed to comply with that edict by keeping only their drive-thrus open till the witching hour, Chidsey explained. He said that extending the business day by five hours, even if done only in the drive-thru, would result in a nearly 1-percent increase in comparable-store sales.

He also said Burger King expects to continue a rollout of labor-saving batch broilers, which are being added to restaurants at the rate of nine per day. BK’s pending slate of new product rollouts also includes new wrap sandwiches, which are being test marketed as “Hold ‘Ems.”

Chidsey said a decision about a systemwide introduction of Hold ‘Ems would not be made until summer, though he expects that a rollout would not come before October or November. Operationally, “it’s a complex product,” he said.

For their part, Wendy’s executives told a conference call of analysts and investors that operational and marketing execution was the principal focus of its management, not speculation that Wendy’s board may be plotting to sell the company.

Kerrii Anderson, Wendy’s chief executive and president, told analysts the company would not comment on buyout speculation, which the company itself had prompted in disclosing first-quarter results that included the company’s statement that it would “review strategic options,” including a possible sale.

“We are focused on what we can control,” Anderson said. “There is no difference [from] before that announcement.”

In outlining Wendy’s strategy for the next few quarters, Anderson cited its focus on product innovation, expanded beverage offerings, a marketing emphasis on burgers and plans for reconnecting with core customers in the 18-to-34 age bracket.

Anderson said newly hired advertising agencies would attempt to achieve that reconnection with campaigns that were scheduled to start in a few weeks.

Burger King, meanwhile, soon expects to see the full benefits of its 10-item breakfast value menu, introduced last February, which Chidsey said had not resulted in any “trade-down” from pricier items.

Wendy’s continues to test-market a variety of breakfast items in some 160 units in five markets, and that prelude to a potential chainwide rollout of breakfast will expand to about one-fourth of the system this year and to more than half of all Wendy’s restaurants next year, Anderson said.

At least one analyst questioned after the chains’ conferences expressed doubts about Wendy’s ability to launch a breakfast menu that could generate the substantial incremental sales the chain has forecast.

“McDonald’s owns breakfast and will not give it up without a brawl,” said Dennis Lombardi, a consultant with WD Partners of Columbus, Ohio. He said Wendy’s would have to overcome consumers’ current breakfast habits to draw them in. The chain would also have to develop an upgraded coffee program, he said.

Anderson alluded to beverages as being part of Wendy’s sizeable new product pipeline, but she would not elaborate. The chain plans to roll out at least 10 new products this year.

Burger King has reported positive results since upgrading is standard coffee to the BK Joe line, following a comparable move by McDonald’s, which boosted its coffee sales by 15 percent. But McDonald’s now appears to be pulling further ahead of the pack by expanding tests of espresso-based drinks to hundreds of restaurants.

New burgers also have contributed to increased sales for all three chains.

Burger King beat McDonald’s to the Angus burger punch three years ago, and it successfully promoted its Angus Cheesy Bacon sandwich in the last quarter.

McDonald’s is expanding a test of three variations of its Angus Third Pounder burgers, which began in the first quarter in California.

Wendy’s does not have an Angus or other “premium-beef” burger, but it is the only one of the three chains that cooks its regular burgers from nonfrozen meat. Wendy’s intends to “reclaim innovation leadership” with new menu items, Anderson said.

She also pledged to continue Wendy’s two-tier menu strategy of offering both premium and value items, as Burger King and McDonald’s also do.

Lombardi of WD Partners said “the balance between premium and value products is here to stay” because quick-service operators are being squeezed by fast-casual restaurants on the premium end and by budget-conscious customers on the value end.

Especially in light of rising wages, cost containment was another pledge the chains’ executives made. Wendy’s will reduce hours of its salaried managers and crew members, starting this month, said Dave Near, chief operations officer.

Chidsey said 90 percent of Burger King’s employees are paid more than minimum wage, but he forecast that the ratcheting effect of mandatory bottom-tier wage increases in 26 states would have an impact nonetheless.

However, he predicted that time savings from use of the chain’s batch broilers and other new equipment would help compensate for wage inflation.