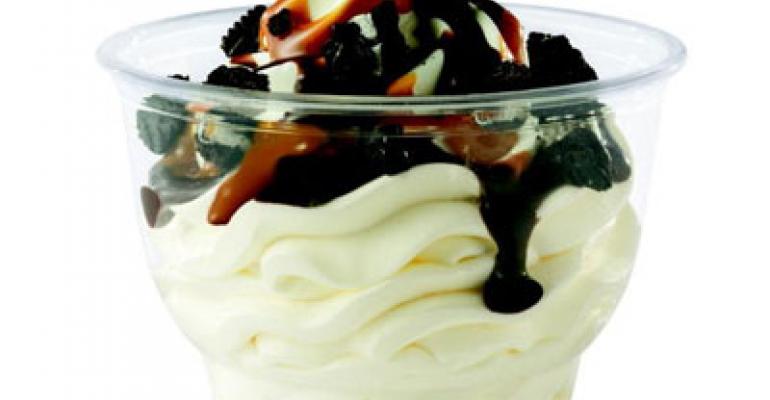 In addition, customers who purchase a BK Value Meal at participating Burger King restaurants nationwide can top off their meal with a free soft-serve cone or cup until Oct. 9.

“Our new soft-serve dessert menu is just one of many ways we are evolving our menu and offering a sweet deal to attract and connect with a broader range of consumers,” said Alex Macedo, senior vice president for North American marketing at Burger King Corp.

The quick-service chain’s new soft-serve desserts are part of a menu update and marketing shift, which is trying to broaden its appeal beyond its traditional core demographic of young, male burger-eaters to families and women.

Burger King’s new ad campaign recently featured television commercials that focused on its California Whopper burger, which was showcased on networks such as ESPN. The commercials highlighted the burger’s ingredients and moved away from the campaign previously defined by the “King” mascot character.

• Premium sundaes with topping choices of peach and granola for $1.79, and sundaes with double brownie, Oreo cookies or M&M's for $2.49
• Soft-serve cones and cups for 89 cents
• Sundaes with chocolate fudge, caramel or strawberry toppings for $1
• Shakes in chocolate, strawberry and vanilla flavors with whipped topping for $2.99 for a regular and $3.49 for a large

Burger King is promoting the desserts with national television and radio advertising that began Monday.

The television ads for the new desserts — like those for the California Whopper — focus on texture and taste.

Burger King, which operates more than 12,300 locations and serves more than 11 million customers worldwide each day, has already updated its menu with items such as oatmeal. Smoothies could be next, as the chain tests that product.