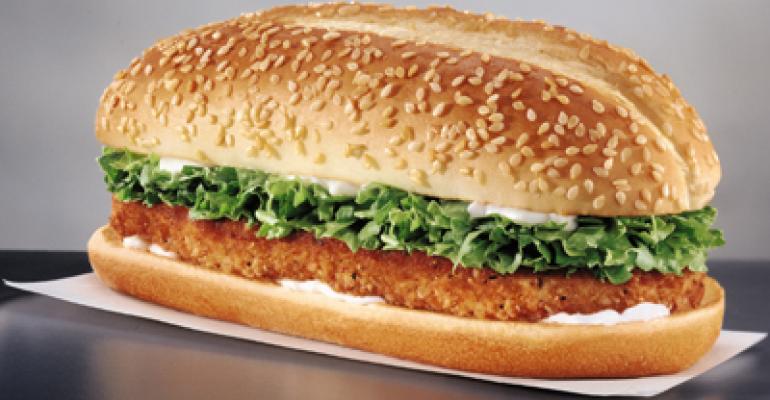 Burger King will offer its Original Chicken Sandwich for $1.04 this Fourth of July weekend as part of a special deal.

The offer, which runs from July 2 through July 4 at participating restaurants nationwide, is part of the Miami-based burger chain’s business strategy to broaden its appeal to customers outside its traditional 18-35-year-old demographic.

“At Burger King restaurants, we are excited about celebrating the Fourth of July with our guests and giving everyone a holiday treat,” Steve Wiborg, president of Burger King Corp., North America, said in a statement.

The world’s second-largest burger chain is promoting the offer on various platforms -- including Facebook, Twitter and the NASCAR circuit -- throughout the holiday weekend.

NASCAR driver Tony Stewart will drive the Burger King race car in the Coke Zero 400 on July 2 in Daytona, Fla.

In-restaurant merchandising and national television and radio spots will complement promotions on Burger King’s Facebook and Twitter pages, where fans can follow the conversation using the #BKChicken hashtag.

“Freshly prepared with quality ingredients, customers won’t be able to pass up this time-tested favorite. We’re confident it will satisfy any appetite whether before, during or after holiday events,” Wiborg said.

The Original Chicken Sandwich is a crispy, premium white meat chicken patty topped with shredded lettuce and mayonnaise on a bakery-style, sesame seed bun, and is typically prices around $3.69.

Burger King was founded in 1954 and has more than 12,250 locations in 76 countries and territories worldwide. About 90 percent of Burger King restaurants are owned and operated by franchisees.