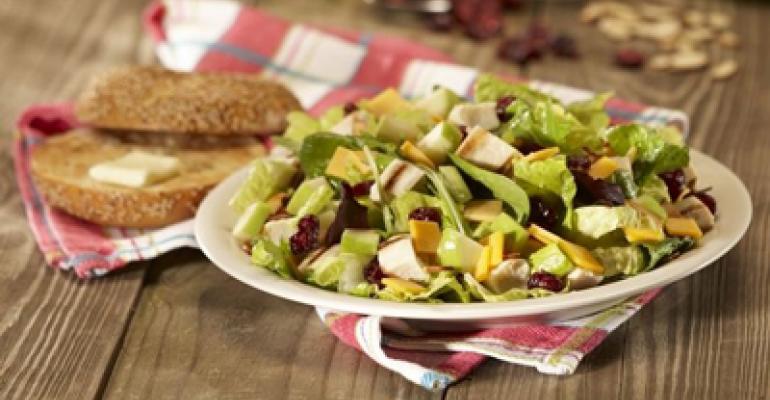 Bagel brand the latest chain to ramp up healthful offerings

Bruegger’s said it has expanded its Under 500 Calories menu with a new line of lunch salads as part of a continuing focus on more healthful offerings.

The five new salads — which come just over a week after the Burlington, Vt.-based chain introduced 200-calorie “skinny” bagels — contain no more than 330 calories each. The salads are priced at $4.99, although prices may vary by location.

“The new Café Salads were developed to offer consumers five flavorful lunch size salads that are budget friendly and under 400 calories,” he said. “The salads appeal to adults who are looking for high quality freshly prepared lunch choices.”

Three of the five 24-ounce salads — Mandarin Medley, Sesame Chicken and Chicken Caesar — will be permanent fixtures on Bruegger’s menu, while the Harvest Chicken and Classic Cobb will be available only through the end of the summer, Bruegger’s said. All five salads are available in a larger “entrée” size portion.

Bruegger’s is part of a growing list of national chains that have rolled out more healthful menu options in recent months.

For example, in May, BJ’s Restaurants, a Huntington Beach, Calif.-based casual-dining chain, introduced a line of Enlightened Entrees with 600 calories or fewer, and Los Angeles-based California Pizza Kitchen said it would feature gluten-fee pizza crust and low-calorie salads.

In addition, TCBY recently debuted Super Fro-Yo, a reformulated version of its frozen yogurt with a more nutrient-rich profile, and the Robeks smoothie chain of Los Angeles is focusing on health in a new marketing campaign and plans to add new menu items.