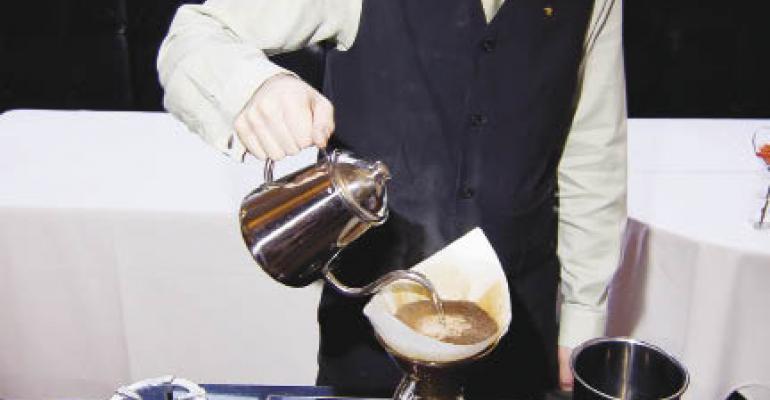 With a growing number of coffee drinkers getting their daily jolt at home, foodservice operators are searching for new ways to perk up their offerings.

Whether they’re upgrading the quality of their brew, using more dramatic methods of presentation, developing new marketing messages or employing a combination of strategies, many restaurateurs are hoping to breathe new life into this mature but highly profitable beverage category.

Convenience-store chain 7-Eleven has tried to attract more young people with its “Coffee Cup with a Cause” program, for which celebrities and their favorite charities are used as marketing tools.

“A little over a year ago, we did a lot of research on Millennials — those young people aged around 16 to 34,” said 7-Eleven spokeswoman Margaret Chabris.

“We found that they really do support organizations that give back to the community, and they’re also very interested in celebrities.”

So they had celebrities design signature coffee cups, and proceeds for sales of those cups go to a charity.

The celebrity for this winter is actor Will Ferrell, and his charity of choice is Cancer for College, which provides academic scholarships to cancer survivors.

Ferrell is the fifth celebrity to participate in the program, and while 7-Eleven declined to provide coffee sales data, Chabris said the company believed the promotion had helped drive sales.

The convenience store chain also is remodeling its coffee islands, changing the color scheme and introducing thermal servers, which keep the coffee warm without degrading its quality by overheating it as traditional coffee hot plates do.

The new design has been tested in Santa Barbara County, Calif.; Long Island, N.Y.; and Richmond, Va. It will be rolled out nationwide over the next year, Chabris said.

On the opposite end of the dining spectrum, fine-dining restaurant Eleven Madison Park in New York City introduced a new coffee program in September that includes small-batch brewing of its regular coffee and two different types of tableside service for customers looking for a more premium experience.

James Betz, the server and barback who was put in charge of the program, said the restaurant, which is part of Danny Meyer’s Union Square Hospitality Group, previously served French press coffee at tableside and also brewed 3-liter automatic drip coffee, much of which was tossed out because it got old before it was ordered.

SLIDESHOW: James Betz demonstrates how coffee gets made at Eleven Madison Park

Now the coffee is brewed in a single pitcher, which is still thrown out after 30 minutes. For iced coffee, the restaurant makes a concentrated cold brew — allowing a pound of coffee to steep in nine cups of cold water — and then adds more ice water to it when ordered.

Customers also have the choice of having their coffee brewed tableside, either using a coffee immersion method or a pour-over process using a thick paper filter.

“It’s a full immersion coffee, like the French press, but you also have a filter, so you don’t have [as many] particulates in it,” Betz explained, noting that holding the water at a precise temperature — 196 degrees Fahrenheit — and brewing it for the right period of time to prevent over-extraction of the beans, and thus coffee that’s too bitter, are essential.

“It’s a kind of coffee that’s really difficult to brew,” he added. “I wouldn’t start my day with it because you have to dedicate extra time and attention to it.”

For the second method, a bonded, thick paper filter is placed in the top of an hourglass-shaped container. Hot water is poured in to moisten the filter, removing any excess paper taste and also heating up the lower chamber.

That water is poured out, the coffee is added, leveled out and moistened with 209-degree water to let it “bloom.” The  coffee swells with water and, after about 30 seconds, starts to deflate. Then the rest of the water is poured in.

“We use a circular motion, keeping the water near the middle of the funnel for good agitation, but you can have different effects on the coffee depending on how you pour it,” Betz explained.

The tight filter makes for a very clear cup of coffee, he added.

“We sell more than I thought we would,” he said, noting that they started out with five vacuum coffee makers for the 80-seat restaurant.

“But by the end of the first week, we had to buy another five,” he said.

He added that, while customers initially were hesitant to try the premium options, “Once they see it at other tables, it raises their interest.”

He also brought a new grinder to the restaurant — one that crushes the beans rather than chops them, thus causing less friction, which could possibly damage the coffee.

He said Eleven Madison Park’s captains, sommeliers, servers, managers and baristas all went through 14 hours of training on the new coffee program.

Tantra, a new restaurant in Atlanta that serves what it calls “sensual food” inspired by the cuisines of the Silk Road, is offering six different spiked espresso shots — served in sherry glasses — on its dessert menu.

“After awhile, you get bored with the same drink everywhere,” he said.

So instead, he developed his own espresso cocktails, including the Romantic at Heart, which contains espresso, Amarula and vodka, and the Italian Amante, made with espresso and Sambuca and topped with a 30-proof alcohol whipped cream.

He also developed the Cocaïna — Spanish for cocaine — which is 100-percent Colombian espresso spiked with honey-infused vodka, served in a sherry glass with a sugar rim. That cocktail is served on a black napkin with a straw, a spoon, a business card and a line of sugar — all intended, of course, to simulate the cocaine experience.

“The idea is to help people get in the mood,” Abraham said, implying, obviously, without actually serving cocaine, that customers are to enjoy “a shot of espresso, a line of coke, and then have a good time tonight.”

Each of the espresso shots is $10.

Probably the country’s leading expert in adding pizzazz to coffee is Starbucks, the Seattle-based chain that introduced mainstream Americans to premium coffee.

Jason Simpson, manager of the coffee giant’s “coffee engagement team,” said that, while the chain makes sure it gets new products in front of journalists, the most important marketers of its coffee are the baristas themselves.

“A lot of it happens in the store, in the interaction between the barista and customer,” he said.

To that end, the company has launched a program that takes staff members to coffee-producing regions as an incentive program. So far, Simpson said about 125 employees have visited Tanzania, Sumatra and Costa Rica.

The chain also has introduced brew-by-the-cup platforms in select stores. A smaller number of locations — about 60 — use the Clover platform that Starbucks acquired in 2008.

Simpson explained that Clover focuses on a very specific target audience — the one that’s willing to pay more for coffee “with a more detailed pedigree. You’ll know the elevation, the coffee variety and anything else that’s compelling about it.”

At the other end of the spectrum is the Pike Place Roast drinker.

That roast, introduced in April 2008, is for the majority of Starbucks customers, who don’t want to sample the different types of coffee that rotate on and off the chain’s roster, but instead want consistency.

“It’s a stab at really segmenting these very limited, super-premium offerings,” Simpson said. They are available in select stores — about 600 of them — with different ones available every month and a half.

“It’s a big shift, where we’re aiming to run out of coffee in a couple of weeks,” rather than making sure the beans are available for an extended period of time, Simpson said.

One of the latest chains to upgrade its coffee service is Coco’s Bakery Restaurant. The 115-unit chain based in Carlsbad, Calif., introduced its “Organic Premium Coffee” systemwide in September in what it said was response to popular demand.

The coffee comes from the Bats’il Maya Cooperative of farmers in Chiapas state in southern Mexico, and the chain is marketing its “partnership” with the cooperative as a commitment to social responsibility.

The coffee is shade-grown and harvested using what it calls a “sustainable farming process.”

The high-altitude coffee has a rich, full-bodied flavor, the company said.