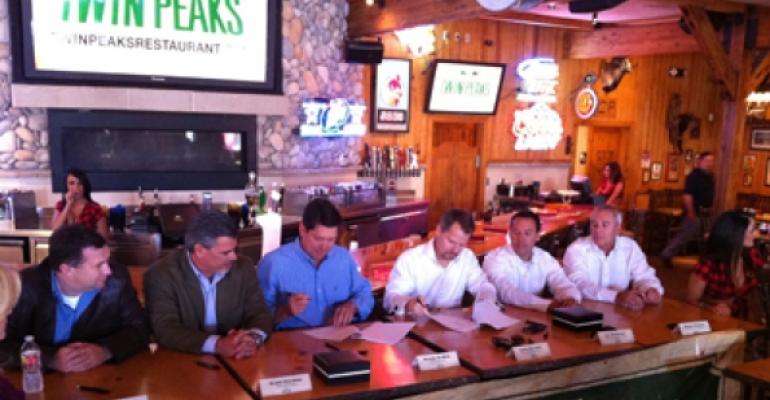 Front Burner Restaurants Inc., parent to the Twin Peaks chain, will announce later today that an investment group led by six former executives of competitor Hooters, including former CEO Coby Brooks, has signed a deal to develop as many as 35 units, sources close the company say.

The franchise group will open Twin Peaks restaurants in Alabama, Florida, Georgia, North Carolina, Tennessee and South Carolina over the next 10 years, with two in the next 18 months and an option for more.

Brooks, who appeared on CBS’ “Undercover Boss” in February 2010 had continued as  CEO at the 425-unit Hooters after the January completion of its sale by Robert Brooks’ estate to Chanticleer Holdings Inc.

Another former Hooters executive, Rick Akam, who served as president and chief executive of Hooters of America from 1995 to 2003, joined Twin Peaks as chief operating officer in May.

“I have great respect for Rick and his understanding of what it takes to build a national restaurant brand,” Brooks said in a statement to be released later today. “His decision to join the Twin Peaks management team made my decision to pursue this opportunity that much easier.”

Randy DeWitt, Twin Peaks co-founder and chief executive, said, “To have these proven industry pros recognize the potential of Twin Peaks and want to be a part of that growth speaks volumes about the foundation we have put in place.

“There is no doubt that this will have a major impact on our expansion plans,” DeWitt said.

Twin Peaks, which earned a Hot Concept award from Nation’s Restaurant News in 2010 has units in Kansas, Nebraska, New Mexico, Oklahoma and Texas. Six additional restaurants are scheduled to open later this year in the Texas cities of Houston, Odessa and San Antonio as well as Baton Rouge, La., Denver, Colo., and Scottsdale, Ariz.

DeWitt and partner Scott Gordon opened the first Twin Peaks in the Dallas suburb of Lewisville, Texas, in 2005.