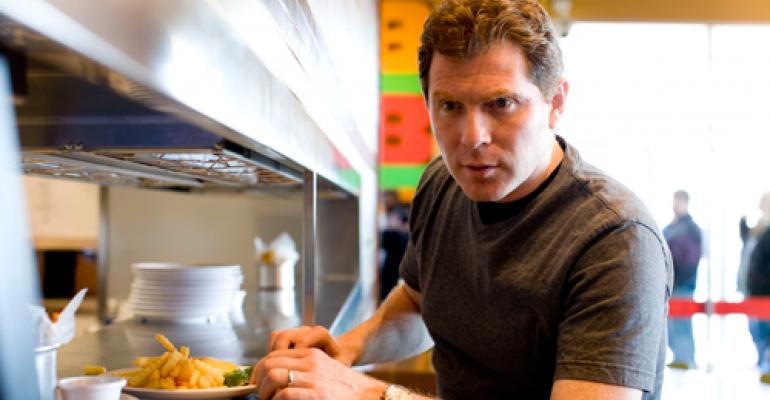 Celebrity chef Bobby Flay would like to get something straight: He didn’t launch the fast-casual Bobby’s Burger Palace concept because of the economic downturn.

“Bobby’s Burger Palace came about for one reason: Because I like to eat cheeseburgers,” Flay said during his keynote address at the recent Break Bread meeting in Los Angeles, hosted by law firm Davis Wright Tremaine, accounting firm J.H. Cohn, and executive search firm The Elliot Group.

Flay — the television chef, cookbook author and owner of six high-end restaurants such as Mesa Grill and Bar Americain — launched the fast-casual Bobby's Burger Palace in a New York City suburb in July 2008.

“People say I’m so smart to have picked the right time with this economy to open a burger place,” he said. “But I don’t think burgers are working in this economy in particular. I think burgers work in every economy — if they’re good.”

The now five-unit burger concept has become the growth vehicle for Flay’s restaurant group, with 12 to 14 locations planned over the next 12 months. “Now I know it works,” he said.

The next five locations are likely to include Bethesda, Md.; Washington, D.C.; Baltimore; Princeton, N.J.; and finally New York City, he said.

The “better burger” market is very crowded now, Flay said, “but I feel we have an advantage. When I open a restaurant, people come."

“That doesn’t mean they’ll like it,” the chef noted. “It doesn’t guarantee anything, but it gives us a shot.”

Flay said he is still tinkering with the concept. For example, he’s currently working on making the burger patty better, he said.

Guests also have been clamoring for a vegetarian burger option, but Flay said, “I just haven’t met a veggie burger I have liked.”

Flay also noted that his company has had to notify some competitors that he has trademarked the “Crunchburger,” or “crunchify,” the practice of topping the patty with chips, as is a signature option for BBP guests.

“We didn’t invent it, but we did trademark it,” he said.

As prolific as he is with his television shows and cookbooks — the latest book is one with recipes from his latest show, “Bobby Flay’s Throwdown” — he said, “I’m in my chef whites all the time in my restaurants. If I don’t pay attention to those restaurants, they won’t be as good.”