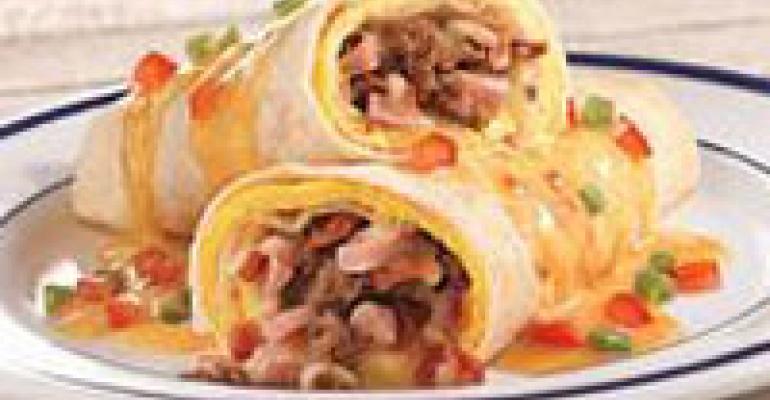 COLUMBUS Ohio Bob Evans is reaching out to younger diners with an online marketing campaign and a college campus tour centered on its new BOBurrito breakfast item.

Bob Evans Farms Inc., the parent to the 570-unit namesake chain, said Friday the new menu item and marketing campaign were efforts to "introduce a new generation" to the family-dining chain, which has traditionally drawn an older crowd.

The BOBurrito features a flour tortilla filled with eggs, shredded pepper-jack cheese and diced onion, along with a choice of one of two fillings: Meat Lovers, with crumbled sausage, diced ham and bacon pieces; and Western, with diced ham and green and red peppers. The burrito is topped with Queso sauce and diced tomatoes and scallions and sells for $5.99. Diners can add a side of home fries for an extra 99 cents.

Bob Evans has created a microsite for the new dish, www.BOBurrito.com, which features two online contests, including one that awards free breakfast for a year to weekly winners. The other contest invites customers to create and upload their own movie trailers about the BOBurrito to compete for a $2,500 digital video camera and Bob Evans gift cards. BOBurrito.com also includes a link to Bob Evans' fan page on the Facebook social-networking site, where users can post comments, enter contests and find recipes.

"Social media tools like Facebook and Twitter are how people communicate today," said Mary Cusick, Bob Evans' senior vice president of marketing. "We think it's the best way to reach a new customer base than we're used to, gain some insight into that demographic, and hopefully introduce a new generation to the Home of Homestyle."

Bob Evans said it would spread the word about its new BOBurrito with a college campus tour that includes stops at five universities in the chain's home state of Ohio. At each school, members of the Bob Evans BOBurrito Team will hand out free samples of the burrito, gift cards and such promotional gear as hats, fleece blankets and T-shirts.