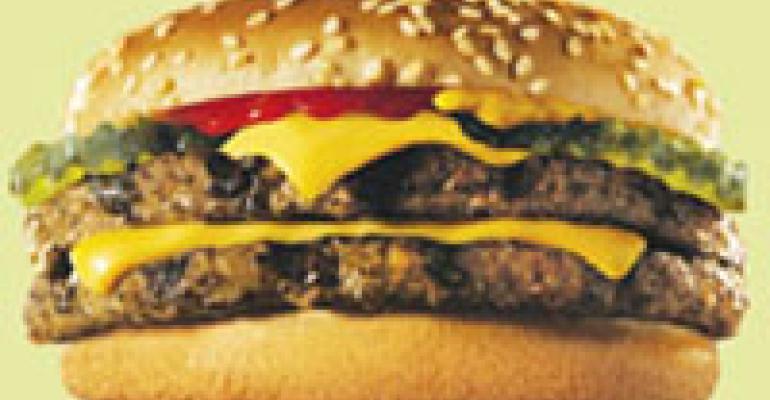 The fight within the Burger King system over the $1 double cheeseburger could have far-reaching repercussions in a franchising world rife with value deals.

The lawsuit filed Nov. 10 in U.S. District Court for the Southern District of Florida by Burger King’s franchisee association claims that Miami-based Burger King Holdings Inc. does not have the authority under its franchise agreements to dictate maximum prices. It stems from a $1 double cheeseburger limited-time offer that began in October, which franchisees claim is forcing them to lose a dime or more per sandwich.

“This case, if you take the allegations in the complaint as true, is about whether a franchisor can impose on a franchisee the obligation to sell a product below that franchisee’s cost,” said Michael Dady, a partner in the law firm of Dady & Garner in Minneapolis. “The principle scares me. It has broad negative implications for other franchisees and dealers.”

In a statement, Burger King said it “believes the lawsuit is without merit.” The company noted that a U.S. 11th Circuit Court of Appeals earlier this year ruled that Burger King “has the contractual right to require franchisee participation in its BK Value Menu program.”
Still, the lawsuit has escalated frictions within the BK system—and others are watching closely.

A day after filing the suit, the Atlanta-based National Franchisee Association, or NFA, sent a letter to Burger King’s board, stating, “Your management team has pushed the franchise community to the brink.” The NFA represents about 80 percent, or 5,200 locations, of Burger King’s U.S. franchise base. Burger King has more than 12,000 stores in 74 nations.

Days later an e-mail from Charles Fallon, president of Burger King’s North American division, to some franchisees was leaked to the media.

“This negative publicity is detracting all of us from running our business and, just as important, lowering the value of our individual businesses,” Fallon’s e-mail warned. “Bankers, landlords, suppliers and potential new franchisees are watching and listening—potentially leading to less lending, at higher rates and increased equity participation.”

Dady, who specializes in franchise law, likened the case to an auto manufacturer requiring auto dealers to take a loss on every vehicle sale but to make it up on volume.

“I don’t like the equities of a manufacturer or franchisor setting a maximum retail price that forces the franchisee to sell below cost,” Dady said. “It’s a bad idea. There might be some short-term pleasures for the consumer, but there will be long-term pain when those car dealers or hamburger purveyors go out of business.”

The lawsuit concerning the $1 double cheeseburger is the second class-action lawsuit that NFA franchisees have initiated against their franchisor this year. In May, the NFA filed lawsuits against Burger King and its soda vendors over the diversion of soda machine rebates to corporate advertising. In the past, the franchised restaurants had used those rebates for repairs.

Burger King looked to a value-driven promotion to combat sinking sales—same-store sales fell 4.6 percent in the September-ended quarter. The $1 double cheeseburger promotion, which began in October, had improved traffic trends at Carrols Restaurant Group Inc., which is Burger King’s largest franchisee. At a securities conference in October, Carrols officials said sales were strong in the initial weeks of the promotion.

But other Burger King franchisees said they are losing on average between 10 cents and 15 cents on every $1 double cheeseburger sold.

“You could conservatively indicate that it costs us between $1.10 and $1.15 per double cheeseburger that we sell with all of our fixed and variable costs being covered,” said Dan Fitzpatrick, a Burger King franchisee from South Bend, Ind. “So when your revenue is only a dollar, it’s pretty clear that we’re not making money.”

The sandwich usually sells for between $1.89 and $2.39.
“The action that we took here is regrettable,” Fitzpatrick said. “When you look at what the management team has attempted to do with these two actions, they have fractured the relationship between themselves and the franchise community.”

The broader issue “is that the Burger King Corp. maintains that they have the right to set prices for our products,” Fitzpatrick added. “They imposed a $1 maximum price on a double cheeseburger. They could have just as easily picked other products on our menu. We reject the notion that they have the authority, either through our franchise agreement or otherwise, to force us to charge prices for products of their choosing.”

The case, Fitzpatrick said, could affect other franchise systems.

“When the franchisor crosses the line and begins to bully the system the way Burger King has done, it becomes concerning,” he said. “Our franchisor has a franchisee-revenue driven model. They make money when we ring up sales. We make money when we wring costs out of the revenue and make profit. When the franchisor crosses that line and says, ‘We’re now going to sell products at a loss, and we’re going to force this on your business model,’ and we have to deal with it, it gets to be very difficult.”

Steve Lewis, a former NFA chairman from 1998 to 2001 and a Philadelphia-based Burger King franchisee, said he was disappointed with Burger King’s deteriorating relations with its franchisees.

“In the past, we have been able to work through our differences in processes that worked very well,” Lewis said. “This particular management team, for one reason or another, opted away from that.… We believe they are so wrong in what they have done. And they forced us into this action. This is truly unfortunate that we are at this point. We should be trying to slay the competition, not each other.”

Julian Josephson, a former NFA chairman from 2001 to 2004 and a San Diego-based franchisee who has units in California, Texas and New Mexico, was concerned that the sale of items below price of cost could violate state statutes.

“There are quite a few states in the country—somewhere north of 20, and I’m in one of them, California—where it is illegal…to do this,” Josephson said.

John A. Gordon, the principal of the Pacific Management Consulting Group in San Diego, said he was surprised to see Burger King roll out the $1 double cheeseburger offer after such intense pushback from franchisees. However, he said September and October were the best months of the year to push value messages, before the interference from the Thanksgiving and Christmas holidays.

Costly promotions are risky, he said.

“Promotions involving big discounts and big portions of the product mix often need a 5-percent-to-10-percent traffic increase just to get back to gross margin breakeven, let alone pay for the incremental marketing,” Gordon said. “A key goal of any discounted offer is that customers will trade up or buy more add-on items when in the store.”

Joseph Buckley at Bank of America Merrill Lynch noted in a report that he was surprised at the level of discord within the BK system.

“In a soft QSR sales environment, BKC’s double cheeseburger promotion is ‘working’ and near term earnings implications are good, but franchisee relationships are in bad shape, in our view,” he wrote. “The latter is difficult to quantify but is a real-world issue that needs to be addressed for the Burger King system to prosper long term.”