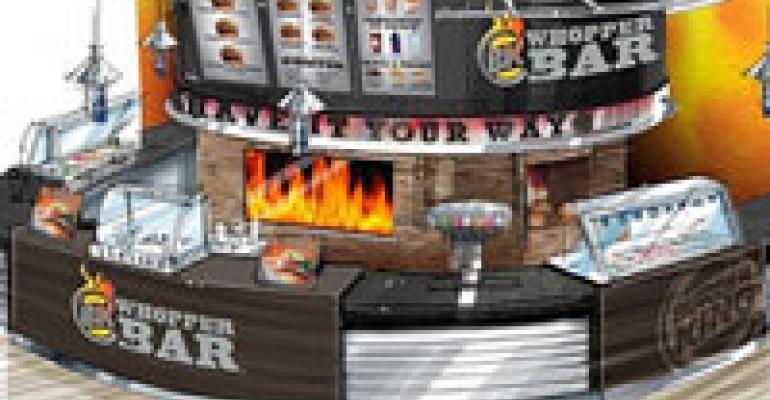 MIAMI Burger King said it would introduce franchisees to a downsized alternative restaurant concept called the Whopper Bar during their convention in May. Franchisor Burger King Holdings Inc. describes it as hipper and more “interactive,” with features like a display prep area where crewmembers will assemble as many as 10 new types of Whoppers to customers’ specifications as the patrons watch.

Spokesman Keva Silverman said the Whopper Bar is still in the conceptual stage and will be targeted for tight locations where a full-sized Burger King might not be feasible, such as within an airport or a casino.

“This is definitely not an attempt to supplant our freestanding stores,” he said.

The present plan calls for such design components as chrome, wood, exposed brick and plasma-screen televisions showing a fire.

Each outlet could feature as many as 10 Whoppers that are not on the standard menus of Burger King stores. Some could be versions previously offered exclusively outside of the United States, as well as limited-time offers, said Silversmith, who added that the menu has not been finalized.

The franchisor declined to reveal the costs or projected sales for the Whopper Bars, nor where the first one might open.

Conceptualization of the Whopper Bar has been under way for about a year, Silversmith said. But he stressed that the project is still in the drafting-table stage.

“It exists only in the illustration, but we do hope there is a lot of interest at our May [franchisee] meeting,” he said. "If there is, then there is the possibility of breaking ground by the end of the year.”