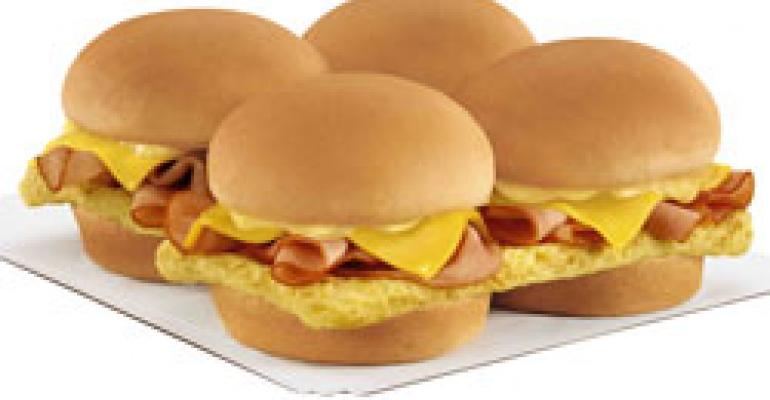 The King’s Mini Me’s are the latest in a line of widespread — but small scale — menu items that many chains have said spark sales and quickly become customer favorites. The bite-sized offerings also are typically priced lower, making them attractive options for customers looking to spend less, operators have said.

The Burger Shots, which had been in test in several markets, are available in a two-pack for $1.39 or a six-pack for $4.09. They each feature a flame-broiled burger topped with mustard, ketchup and two pickles in a bun without sesame seeds. The Breakfast Shots feature either ham, bacon or sausage with egg, a smoky cheese sauce and American cheese served on a bun. They are $1.49 for a two pack or $2.89 for a four pack.

Burger King Corp. operates or franchises more than 11,600 restaurants in the United States and 73 other nations.

Other chains, like CKE Restaurant Inc.’s Hardee’s, introduced in September a smaller and cheaper version of its popular Thickburger. The $1.99 Little Thickburger is made with a quarter-pound Black Angus beef patty, compared with the third-pound original Thickburger and the two-thirds-pound Monster Thickburger. Like the original, the Little Thickburger is topped with cheese, lettuce, tomato, diced red onions, mayonnaise, ketchup, mustard and pickles.

Good Times Restaurants Inc., parent of the 54-unit Good Times Burgers & Frozen Custard brand, reported an initial sales surge in the summer of 2007 when it introduced Bambino burgers, or sliders, for 75 cents each. They were also sold in a three-pack for $2.25 or in a five-pack for $3.75.

Outside of quick service, restaurants from casual-dining chains to high-end, white-tablecloth establishments have experimented with mini menu items. Chili’s Grill & Bar, a Brinker International Inc. brand, offers Big Mouth Burger Bites, and officials have said they are a customer favorite. The chain currently is promoting a meal centered on mini offerings, the Triple Dipper, which allows customers to pick three “dip-able” menu items from its Burger Bites, new Chicken Crisper Bites and appetizers like the Southwestern Eggrolls. The dinner is priced at $9.99.