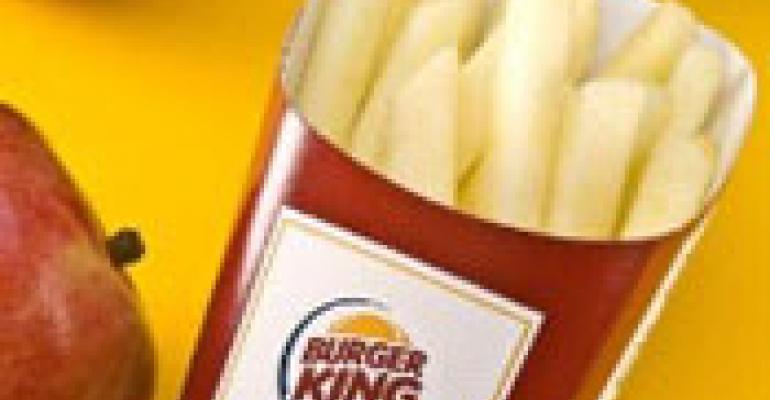 Burger King last fall said it would introduce the Apple Fries, which are skinless red apples sliced to resemble French fries, as part of its revamped kids' meal. At the same time, the nation's No. 2 burger chain announced that it had it joined the Council of Better Business Bureaus’ Children’s Food and Advertising Initiative in order to focus its advertising to younger children on products that promote healthy dietary choices and lifestyles.

As part of its commitment, Burger King said it developed a set of nutritional guidelines for the kids' meals that it advertises. By December, the company said it would advertise to kids only meals that provide no more than 560 calories, less than 30 percent of calories from fat, less than 10 percent of calories from saturated fat and no added trans fats.

In late June, Burger King rolled out the health-oriented kids' meal, which features the Apple Fries with caramel dipping sauce, as well as macaroni and cheese and milk with 1-percent fat. The meal contains 350 calories and 9.5 grams of fat, according to Burger King's website.

Burger King officials said in a statement Tuesday that the Apple Fries won the Kid Friendly Product of the Year honor from the Glycemic Research Institute in Washington, D.C.