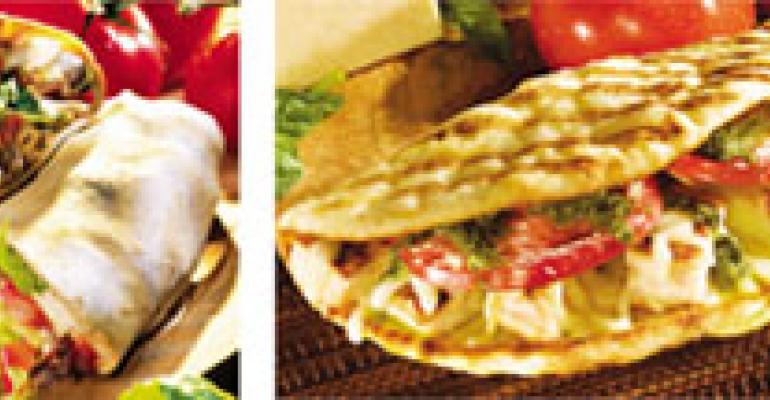 “Leaves a little bit to be desired.” That’s the verdict that Mike Rotondo remembers most from a fateful run of focus-group testing conducted by Tropical Smoothie Café in early 2008.

“We got rave reviews, [for our smoothies]” Rotondo said, but when the line of questioning turned to food, the chain’s loyal—and surprisingly decorous—customers reported that their desires had been, well, left unattended.

“We thought there was a huge opportunity there,” said Rotondo, vice president of operations for the 280-unit fast-casual chain based in Destin, Fla. “So we embarked on a project. We called it ‘The Year of the Menu.’”

The project started with a stern, hard look at the chain’s sandwich menu, which Rotondo said was solid but admittedly lackluster. To liven it up, they effectively started over.

The resulting new lineup, pitched as more refined while remaining at a similar price point, took its place under the new designation “Bistro Sandwiches,” with such offerings as wasabi roast beef with pepper Jack, romaine, and a wasabi-Caesar dressing on toasted ciabatta, as well as cranberry-walnut chicken salad with tomatoes and field greens on nine-grain wheat.

Then came a subsequent line of Grilled Flatbread sandwiches, which featured different combinations such as chicken pesto, Mediterranean veggie and “Caribbean Luau.” The flatbreads were originally conceived as a low-priced value item, but wound up expanding into a line that now accounts for about half of Tropical Smoothie’s total sandwich sales.

“In the world of value menus,” Rotondo said, “a lot of people go and get a $1 whatever, but that’s all they’ll pay for it. We want to be seen as a higher-quality concept, so we wanted our value item to be able to go up against somebody’s else’s higher-priced sandwich. The best sound bite we got in testing was, ‘Man, I would pay more than $3.99 for this.’”

The comparatively low-priced flatbreads were allowed some pricing leeway because, in re-evaluating and consolidating its buying, Tropical Smoothie managed to lower its total food costs by 4 percentage points, even while going upscale on certain items. This also helped goad franchisees to genuinely push the new food menu, as opposed to just letting it accentuate smoothie sales.

“We knew our food costs were too high,” Rotondo said. “If you’re a franchisee and you’ve got sandwiches that cost you more than you would like, how aggressive are you going to be in promoting them?”

After a menu redesign and a move toward more prominent menu board placement within stores, food sales at Tropical Smoothie Café have increased, with a 20-percent to 30-percent uptick in terms of food units sold.

“What we’re seeing with Tropical Smoothie Café is a health-, wellness-, lifestyle-type of positioning, with fresh and natural ingredients, and food figures into that very strongly,” said Darren Tristano, executive vice president of industry watcher Technomic Inc. “Now that you can get smoothies in so many places, smoothie players have to really think about what complements their offerings, what will keep people coming and what will help raise their check average.”

Part of the menu revamp’s success stems from franchisees’ renewed vigor, Rotondo said. To roll out the menu overhaul within the system, Rotondo and a team from the corporate office got on a bus and went out on a six-week tour to the chain’s 280 stores.

“The way we presented it to [franchisees] is that our menu is like a strip center. It’s like real estate, and a good tenant in real estate has to pay the rent. When you looked at our product mix before, some of our sandwiches just weren’t paying the rent.”

Food sales, led by sandwiches and supported by wraps and salads, now represent half of total sales for Tropical Smoothie Café. And they help bolster the fresh and discerning characteristics of the chain’s foundational smoothie offerings.

“These guys are very serious about each and every ingredient,” said Andy Revella, a consultant who worked on the new menu. “We probably looked seriously at over 50 different sandwich combinations.”

One of those that didn’t work was a “kind of Cuban” sandwich that never quite took off.

“I guess our customers just weren’t looking for that from us,” Rotondo said, but many of the rest stayed—and thrived.

“There’s something on our menu now for everybody,” said Troy Godbee, regional director of franchise operations and a prime architect, with Rotondo, of the current Tropical Smoothie Café menu. “We knew we needed to come up with some items that not only fill your belly but make you walk away and say, ‘Wow.’”