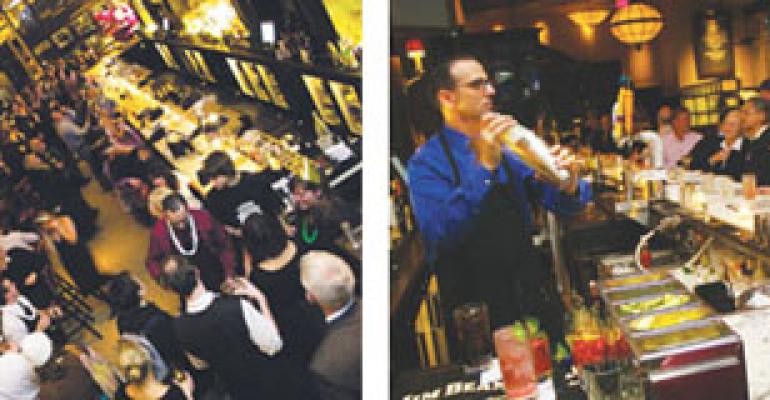 Peruse the menu at Boston’s Eastern Standard, a sprawling French-influenced bar and brasserie located near Fenway Park, and one fact becomes immediately clear: These guys don’t play favorites. In a market where there seems to be a tendency toward specialization in one variety of beverage over another—wine bar versus tap house, cocktail lounge over whiskey palace—Eastern Standard covers all bets, and does it more than ably.

Whether your tipple is ale or Aviation Cocktail, bourbon or Burgundy, you’ll find something to tickle your fancy behind the restaurant’s lengthy marble-topped bar, which is, after all, how it should be.

With few specialized exceptions, restaurants don’t discriminate against fanciers of chicken over beef or place seafood lovers ahead of pork advocates, and vegetarian options are now a de rigueur part of almost any menu. So why shouldn’t a beer drinker be offered a decent selection in a cocktail lounge, or whiskey aficionados be able to satisfy their longings in a wine bar?

“When I set out to open Eastern Standard, I wanted to develop a fully integrated food and beverage program,” says owner Garrett Harker. “To me, that means having something exciting in the cocktail program and what I think is one of the better beer programs in the city. We even have eight or nine innovative ‘mocktails’ for those who don’t want something alcoholic.”

They key, he says, is offering something for everyone, and satisfying almost any desire. It’s hard work, he adds, especially when you factor in the need to keep up with staff education, but in the end, it’s worth it.

“Often people will stick with what they know or what’s safe,” Harker says. “But we think it’s fun to help them along and encourage them to try new things. We want to dislodge people from the normal way they approach the dining experience.”

“Dislodging” may not be at the top priority for Portland, Ore.-based chain McCormick & Schmick’s Seafood Restaurants, but executives there also realize the importance of variety.

“To us, drinks should reflect historical relevance as well as appealing to the modern consumer,” says Jeff Skeele, senior vice president of operations at McCormick & Schmick’s. “The irony is that by sticking with that old-fashioned philosophy, we have now become hip and trendy.”

That trendiness revolves around McCormick & Schmick’s three-year-old cocktail program, which both emphasizes classic cocktails and seeks to place them in historical perspective, and a commitment to local, craft-brewed beers.

“Being based in ‘The Home of the Microbrews,’ the Pacific Northwest, we are in a land where there is phenomenal craft brewing,” Skeele says. “There is a trend now to marry food with beer, [and to do that] you need the variety and the ability to walk the customer through the various styles.”

Add all this to McCormick & Schmick’s aggressive wine-by-the-glass selection and you have a recipe for a very successful beverage program.

As Skeele says: “It’s all about understanding and addressing the needs of an evolving consumer.”