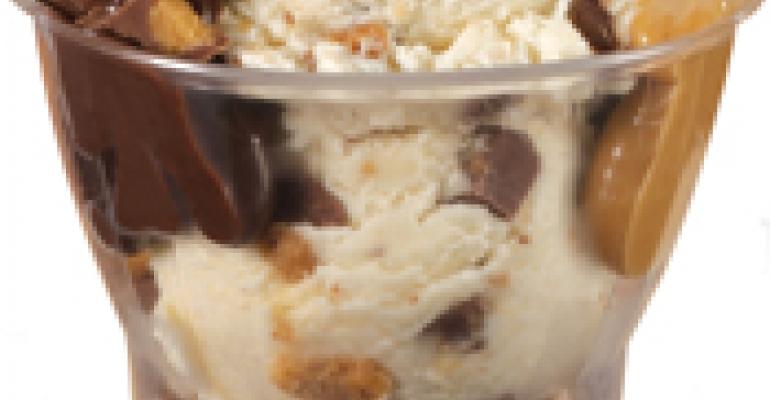 CANTON, MASS. Baskin-Robbins has taken the next step to reinvigorate its 61-year-old brand with the launch of its first TV campaign in two years. —

The campaign and a commitment to roll out innovative products year-round continue an effort “to bring excitement to the brand” that began two and a half years ago, when Baskin-Robbins began to update its image with a renovated store design, said Scott Colwell, vice president of marketing for the nearly 6,000-unit chain. —

“As we put together our plan for 2007, we have a goal to energize an iconic brand,” he said. “We have what we believe is exciting product news. The best way to communicate product news is broadcast television.” —

The campaign is a way for Baskin-Robbins, a division of Dunkin’ Brands, to strengthen its image as a marketer of innovative, premium ice cream, he said. —

Baskin-Robbins has long battled such traditional competitors as Dairy Queen and Carvel for market share. More recently, the rapidly expanding Cold Stone Creamery, founded in 1988 and now with more than 1,400 units, has added to the pressure. —

However, Colwell dismisses them as real competitors, saying they offer “a convenient snack” for people on the go. “We’re much more of a destination,” he said. —

The TV campaign focuses on new Reese’s Peanut Butter Cup shakes and sundaes, included in the chain’s “Candy Bar Madness” promotion, and is the first work for Baskin-Robbins by its new agency, Cliff Freeman and Partners of New York. —

“That’s something Cliff brought to us to develop an emotional connection with consumers,” Colwell said. “Cliff looks for simple truths. We think we captured that with this campaign.” —

In one spot, a mother and father punish their son some for misbehaving. —

“You’re lucky nobody got hurt,” the father says to him. “Now go to your room.” —

“And you can forget about going to Baskin-Robbins for a Reese’s shake,” the mother says. —

That remark startles the father, who says, “Whoa, let’s not go crazy here.” —

A second spot shows a sad little girl holding a math test and standing next to her grandpa. —

The camera cuts to the large “F” on the test. Grandpa deftly changes it to an “A.” —

“See you in the car,” he says. The spots are family-oriented because “to me, ice cream is all about the family dynamic,” said Cliff Freeman, the agency’s chairman and chief creative officer. “For the most part, it’s a rare opportunity for families to be together in a situation that’s very emotionally satisfying. Everyone seems to be happy when they’re eating ice cream.” —

Baskin-Robbins attracts many families during its peak weekend business and has several new products in development to keep them coming back, said Dave Nagel, the chain’s manager of brand excitement. —

Neither he nor Colwell would specify what those products are, but Nagel said: “We’re always trying to innovate and provide our customers not only with their favorite flavor but with their next favorite flavor. There’s a huge opportunity for us.” —

Freeman agreed that new products are essential to the chain’s brand image. —

“New products are really important,” he said. “I think the marketing and sustaining of brand personality is very important.” —

As Baskin-Robbins moves forward with more visible marketing to boost sales, it also is continuing the redesign of its units. More than 300 stores have been remodeled since the program began. —

“Our plan is to transform the entire system over the next four years,” Colwell said. —

Sales at remodeled units “have been meeting or exceeding our expectations,” he said, although he declined to provide specific figures on average unit sales. —

Remodeled units feature a curved ice cream bar where customers can sit and watch their treats being made and bins and jars filled with toppings and add-ins. —