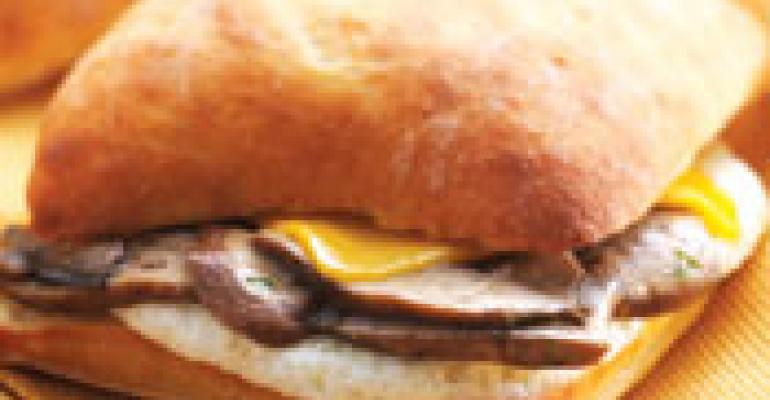 Leading bakery-cafe brands are capitalizing on the breakfast boom by adding protein items to morning menus while researching new afternoon snacks, with both those efforts following the segment leader’s failed dinner-daypart foray.

The menu extensions retain the concepts’ reliance on fresh baked goods and build on solid lunch traffic while seeking to boost customer frequency and take market share from other foodservice segments.

The Chicago-based research firm Mintel Menu Insights has tallied a 23-percent increase in the number of breakfast items available in all restaurant segments from 2005 to 2007. That study, released last August, concluded that fast-casual restaurants pose a potential threat to quick-service and family restaurants in the breakfast arena.

Officials of Boston-based Au Bon Pain say sales of breakfast sandwiches have risen 28 percent in the past year. “We’re trying to increase other times of the day in addition to lunch, and breakfast is a growth area,” said spokesman Ed Frechette. “People want something beyond the traditional meat, egg and cheese sandwich.”

Au Bon Pain’s newest breakfast sandwich—portobello mushrooms, Cheddar cheese and eggs on ciabatta bread—has sold well, as have a prosciutto and egg combination on an Asiago bagel and a smoked salmon-wasabi sandwich on an onion-dill bagel.

“We have the basics, too, and are playing around with more innovative and interesting options,” Frechette said.

The breakfast sandwiches are offered all day at the 182 U.S. branches of the 226-unit chain, though 83 percent of those items are sold in the morning.

“Our focus now is on breakfast,” he said.

All three sandwiches, on grilled ciabatta, contain freshly cracked, steamed eggs and Vermont Cheddar cheese. One of the items includes applewood-smoked bacon, and another has a pork sausage patty.

“People wanted more options” in addition to the four kinds of baked egg soufflés currently available at Panera, Carlson said. Prices of the new sandwiches will start at $2.99.

Company-owned Panera branches and most franchised outlets recently aborted the chain’s attempt to boost dinner business with a pizza product, dubbed Crispani, which failed to meet expectations and was discontinued. Panera offers the same menu of sandwiches, soups and salads from lunch until evening closing time.

While most bakery-cafes have included bagels in their menu mix for some time, at least two chains that specialize in bagels and bagel sandwiches, Einstein Bros. and Bruegger’s, continue to increase their offerings of breakfast sandwiches with eggs. Einstein Bros. has added tortilla wraps and fresh-baked breads, including multigrain and marble rye, because it can better control quality that way, explained Chad Thompson, the chain’s senior director of research and development.

“You can’t eat bagels for breakfast and lunch, so we’re offering lighter options,” he said. “You can get any of our products on any of our bread carriers.”

Afternoon snacks are another daypart that some bakery-cafes are developing, especially as more customers come in then with their laptop computers or take a break from working in their home offices.

“We are working hard on testing some things for afternoon snack time, from about 2 to 6 p.m.,” said Einstein’s Thompson, who declined to give details.

Currently, Einstein Bros. has successfully sold its pizza bagel and frozen drinks in the afternoons, he said.

Bruegger’s, the 274-unit chain based in Burlington, Vt., introduced its first omelet bagel sandwich this winter, featuring spinach, Cheddar and optional bacon, ham or sausage, as a four-month limited-time offer.

“We have really been trying to draw interest around the egg, and we’ve had a lot of success,” said spokeswoman Paula Doyle.

As for afternoon snacks, Bruegger’s is “looking at that period closely,” Doyle said. The chain is likely to relaunch a cookie program and a pretzel bagel. This summer Bruegger’s may bring back iced coffee and debut blended frozen-coffee drinks.

Dallas-based La Madeleine, which has experienced increased business at breakfast and lunch, recently took steps intended to benefit the dinner daypart by adding hearty entrées and mini desserts. The four mini parfaits and mini crème brûlées, which are served in miniature, clear glasses and sell for $1.29, have really taken off in midafternoon, said Phil Costner, the chain’s chief operating officer.

The desserts, which consist of two to three bites each, are made in-house in the chain’s commissary.

“They are low-risk because you don’t have to commit to a big portion,” Costner said.

“Lunch is our bread and butter, so to speak,” Madison said. “We are always looking for more things for breakfast and the afternoon chill-out period. We are working on some things for off-peak times but can’t talk about them yet.”