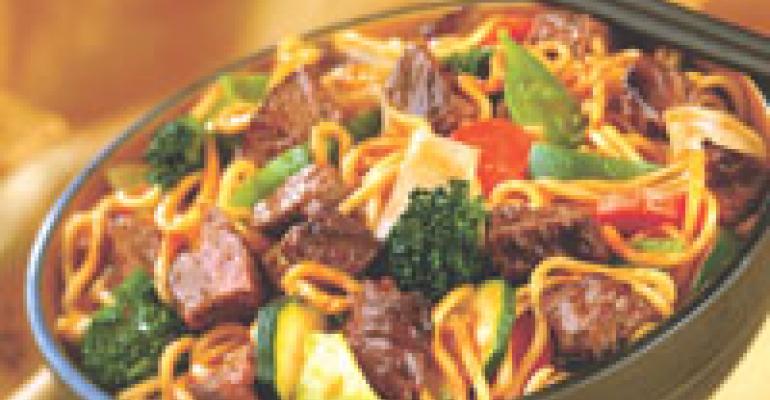 Asian menu offerings still growing, even as some chains shrink or slow expansion

Asian-inspired chains are tapping appetites that have propelled that continent’s cuisines into the American consumer mainstream, though some prominent brands have shrunk in size recently or curtailed growth plans.

Reasons for that increase, Caranfa said, include public perceptions that Asian foods are healthy, fresh and a good value with large portions. She added that most of the flavors are familiar, and young adults see Asian food as trendy.

However, P.F. Chang’s China Bistro Inc. recently trimmed the growth plan of its Pei Wei Asian Diner fast-casual chain and sold a majority interest in Taneko to another operator after testing the concept for more than a year. Meanwhile, Wok Hay’s new owner, Ruby Tuesday Inc., is struggling to turn around its namesake chain and remains noncommittal about expanding the acquired brand.

Rock Sugar’s parent, The Cheesecake Factory Inc., has yet to take the wraps off its latest concept.

Foodservice trends analyst Robert Sandelman of San Clemente, Calif.-based Sandelman & Associates said the fast-casual wing of the Asian movement is performing well for now generally, though it’s uncertain how the slowing economy could affect it.

Noodles & Company of Boulder, Colo., appears well on the way to establishing its identity, with 171 restaurants in 16 states and more than 40 anticipated openings for 2008. Though concentrated in the West and Midwest, Noodles & Company has expanded to Maryland and Virginia and will open its first unit in North Carolina later this year, spokesman Dwayne Chambers said.

Though only one-third of the chain’s menu is Asian, the noodle dishes and soups that predominate on the menu have an Asian flair, even with Mediterranean or American ingredients. Checks average $10, and annual per-restaurant sales average $1 million, Chambers said.

In contrast to Noodles & Company’s growth ambitions, P.F. Chang’s is slowing the expansion of 144-unit Pei Wei to a planned 25 locations this year, compared with 37 in 2007, said spokeswoman Laura Cherry.

“We are focused on developing the management team and improving margins,” she said, predicting that efficiencies would improve as existing markets are filled out.

Tokyo Joe’s, a 17-unit chain based in Centennial, Colo., has signed leases for four new units this year and five next year, said Larry Leith, its president. His forecast calls for 50 Colorado outlets before the chain looks to expand out of state.

Same-store sales growth was in the double digits last year and has increased every year since the chain’s inception in 1996, Leith said. Rice and noodle bowls, sushi, and other choices give the menu a predominantly Japanese twist and yield an all-day check average of $8.50.

Samurai Sam’s, owned by Scottsdale-based Kahala Corp., is a wholly franchised chain of 76 units in 17 states with 19 more under development. Its primary menu items are teriyaki bowls, wraps, yaki soba noodles and grilled egg rolls, and the all-day check average is about $8.30.

“There is nothing deep-fat-fried,” said Sean Wieting, Samurai Sam’s president. “Everything is either steamed or grilled and served in a fast-casual setting.”

About 60 percent of its customers eat in the restaurants, with the rest ordering takeout. The chain plans to debut an offshoot, Samurai Sam’s Asian Fusion, this spring in Los Angeles, featuring an interactive stir-fry bar as well as sushi, Wieting said.

Chicago-based Stir Crazy, which has featured an interactive stir-fry component since its inception in 1995, has expanded since its acquisition in November 2006 by the Walnut Group private-equity firm. With 11 restaurants currently, Stir Crazy expects to have 18 by early 2009.

“The demand for a full-service Asian casual-dining restaurant is not only out there, it’s growing,” Stir Crazy chief executive Mike Strauss said.

RA Sushi, owned by Miami-based Benihana, emphasizes its bar, with marketing especially targeted at 21- to 35-year-olds, said vice president Scott Kilpatrick. Most of its kitchens stay open till 11 p.m. and the bars till 1 a.m.

Leases have been signed to expand the 17-unit RA Sushi system by seven locations, Kilpatrick said. The chain’s menu is primarily Japanese, with sushi accounting for half of food sales, and the other half derived from steaks, noodle dishes, seafood and other dishes. Checks average about $23 at dinner and $16 at lunch.

Howard Gordon, a Cheesecake Factory senior executive, said the company’s flagship chain and its Grand Lux Cafe restaurants “have had Asian-influenced menu items for a long time … and have seen their popularity grow.”

The new upscale-casual Rock Sugar Pan Asian Kitchen concept will have no overtly Chinese or Japanese items but will instead focus on Thai, Vietnamese, East Indian, Indonesian and Malaysian flavors, he explained.

Ruby Tuesday bought Wok Hay because of its growth potential but has not yet decided whether to expand it, said senior vice president Rick Johnson. The concept’s format has been changed from fast-casual to full service but the all-day check average has remained $10 to $12.

Dallas restaurateur Jack Baum bought control of the Taneko upstart from P.F. Chang’s last month and vowed to expand it as part of his 13-unit Food, Friends & Co. group. Neither terms of the sale nor Taneko’s sales record were disclosed, but Baum said, “I wouldn’t have done this if I thought Taneko’s potential is just one location.”