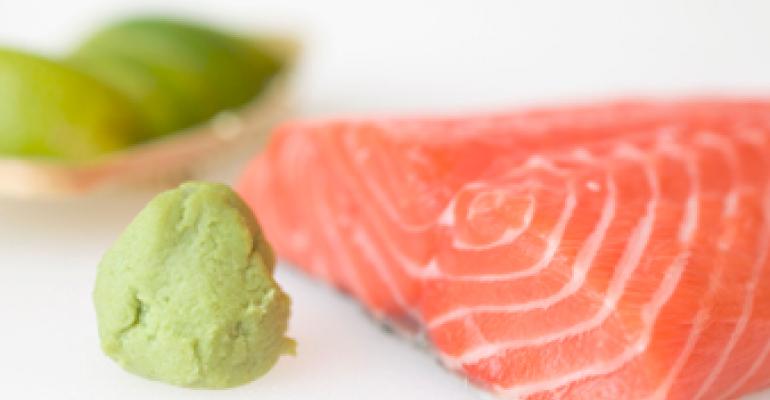 Looking at the most popular sauces, flavors and menu descriptors used at restaurant to illustrate seafood dishes, Asian and Latin-influenced flavors and ingredients were most popular, according to the latest data from Datassentials, a restaurant menu and marketing research firm.

The results lined up with a previous look at the menu research firm’s data showing growth and popularity in Asian and Latin cuisine — along with comforting classics — when it comes to top seafood dish preparations.

Data gathered from the menus of more than 4,800 restaurants showed that when it comes to seafood, the use of truffle on the menu rose the most from 2010 to 2011, increasing 33.5 percent. Aïoli came in second, as its use on menus rose 18.3 percent.

Datassentials only tracks the appearances of words, so the popularity of truffle could lead to numerous menu sauce and flavoring possibilities, from the use of the expensive ingredient in mushroom form to possible use of less expensive ingredients that use or mimic truffle’s characteristic smell.

For example, truffle butter can use a small amount of truffles to extend the mushroom’s flavor, while commercially available truffle oils are created without using truffles, instead combining oil and organic odorants to impart the smell of truffles to food items.

A garlic flavored emulsion similar to mayonnaise, aïoli is a French sauce commonly served with seafood.

The two ingredients both show a nod towards flavorful and traditional preparations. While truffles skews more towards the high-end because of its base ingredient’s price and availability, the increased use of aïoli also points towards traditional French culinary traditions and rich foods.

Sauce and flavor terms such as miso and wasabi were on the list of top growing menu descriptors for seafood dishes, as did the word “Jasmine.” The ranking of jasmine as of the top 10 menu descriptors based on increased usage between 2010 and 2011 could imply an increase in Asian fish dishes that are accompanied with Jasmine rice.

A top ten list of most listed sauce and flavor terms in 2011 revealed other terms associated with international cuisine that were mentioned but not included as growth ingredients, such as jalapeño and soy, which probably refers to the use of ingredients such as soy sauce or soybean-based miso.

Spicy flavorings and ingredients, such as the above-mentioned jalapeño, along with chipotle and wasabi also ranked high in listed rankings.