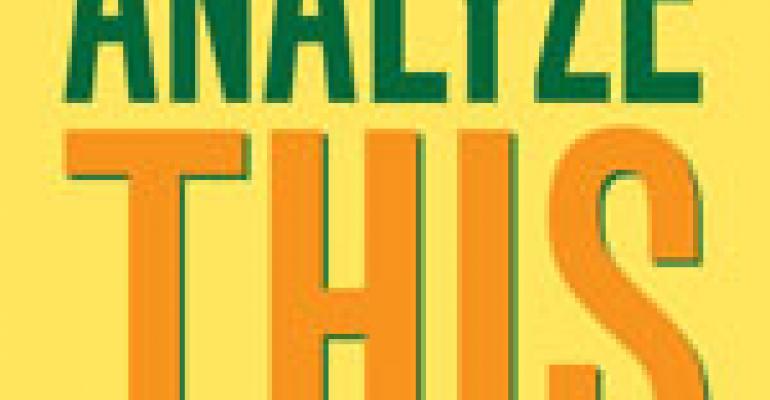 Editor’s note: Analyze This is a quarterly look at a publicly traded restaurant company that has sparked discussion, for better or worse, among securities analysts. The comments do not necessarily reflect the views of Nation’s Restaurant News nor should any statement be construed as a recommendation to buy or sell any security.

Analysts and observers said they were disappointed that the parent of such chains as Red Lobster, Olive Garden and LongHorn Steakhouse was not able to post improved same-store sales—a negative sign for the casual-dining segment as a whole. Darden’s same-store sales remained negative in June, July and August, and executives said trends so far in the current quarter remained about the same. —Casual-dining bellwether

Clarence Otis, chairman and chief executive of Darden, said corporate expenses were helped in the quarter by favorable food and energy costs and an “increasingly efficient restaurant support platform.” Darden’s total cost of sales fell 4.1 percent from a year ago. —Casual-dining bellwether

Farmer suggested that Darden’s most recent sales slump can partly be blamed on the discounting strategies of other casual-dining chains. While Olive Garden and Red Lobster are lower-priced concepts, they have not promoted combo meals, such as those at Applebee’s or Chili’s, and have not lowered prices to the $5 price point like at T.G.I. Friday’s. —Casual-dining bellwether

“That Olive Garden and Red Lobster same-store sales remained soft into August—down 2.5 percent and 6 percent, respectively—underscores the fact that aggressive promotional discounters, i.e., Chili’s with its 3 for $20 promotion, are clearly winning the short-term market share battle,” he said. “Most investors were aware that Red Lobster got off to a slow start in June, but it was a big surprise that the softness persisted throughout the quarter.” —Casual-dining bellwether

While discounting may work for the short term, Farmer said Darden is most likely the best positioned to “weather the discounting storm with significant concept, marketing scale and operations advantages.” —Casual-dining bellwether

Ludington also discussed the effects of segment discounting on Darden, pointing out that officials said Red Lobster and Olive Garden would start to focus on value to win back consumers without deep discounting. —Casual-dining bellwether

“Management continues to believe that defending traffic with discounts would damage the brand image and unit economics, but acknowledges that in the current environment, a value message particularly resonates with consumers,” Ludington noted in his research. “Where prior Red Lobster promotions stressed culinary expertise and quality, promotions following Endless Shrimp will emphasize value to a greater extent. Along with the Never-Ending Pasta Bowl and LongHorn’s ‘Twist on Classics’ promotion starting at an $11.99 price point, [Darden] will continue to stress value for customers without resorting to discounts.” —Casual-dining bellwether

Glass pointed to Darden’s size and economies of scale as two factors that would help the company remain strong during the current period of slowed sales. He noted also that, unlike some smaller competitors, Darden is able to purchase food and other commodities more cheaply and manage its supply chain centrally. —Casual-dining bellwether

“This best-in-class casual operator is better equipped versus peers to drive sales and manage costs in the current environment due to its massive advertising and value orientation,” Glass noted. —Casual-dining bellwether

While the negative same-store sales removed any hope for a casual-dining recovery this summer and fall, lower food costs and improved margins are a bright spot, he added. —Casual-dining bellwether

Bernstein suggested that cost-savings would remain the primary earnings driver for casual-dining companies in the months ahead, rather than a hoped-for sales recovery. —Casual-dining bellwether

“Restaurant investors approached Darden’s [first-quarter] release with high expectations, awaiting validation that comp trends were seeing slow but steady improvement of late, taking pressure off cost-saving initiatives that are likely more limited,” he noted. “Unfortunately, Darden was unable to deliver such a message, and effectively reminded investors that any such hint of industry comp improvement is likely attributable to aggressive discounting, which will pressure margins and damage respective brand long-term health and market share.”— [email protected] —Casual-dining bellwether