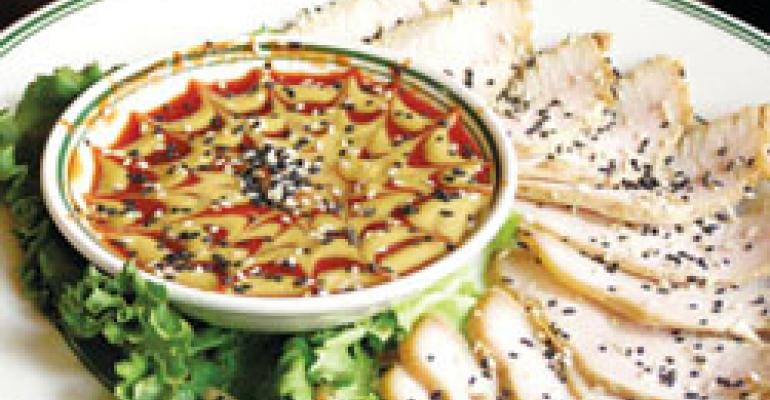 While the word “turkey” undoubtedly conjures up instant mental images of Thanksgiving for many people, restaurants around the country serve this all-American poultry every day of the year—and every meal of the day.

“Turkey generally is a very popular sandwich,” says Scott Zellmer, general manager of The Coffee Grounds, in Eau Claire, Wis., “because people always perceive it as being healthier than beef.”

Coffee Grounds chef Bradley Parent creates eight new sandwiches for The Coffee Grounds every month, including one turkey offering. He especially likes turkey paired with fruit and semi-soft cheese, such as feta, goat cheese or Brie.

“Our restaurants are located in a medical area, where people are very in tune to health,” she says. “People love the idea of a muffaletta, but maybe they can’t start eating mortadella, salami and ham.”

To make the sandwich, Druker hollows out a loaf of round bread and brushes the inside with olive oil and basil and then layers on lettuce, tomato, red onion, black and green olives, red and yellow roasted peppers, artichoke hearts, shaved Parmesan cheese, and turkey. The mixture gets topped with a little vinaigrette, more basil, and salt and pepper.

“It gives you that feel of eating a great submarine sandwich,” she says, “but yet it has a more healthful approach to it.”

For the sandwich, Druker says the turkey slices should be not too thick and not too thin.

“It’s kind of like Goldilocks,” she says. “It’s just right because sometimes when turkey is sliced too thin, you lose the flavor. When it’s too thick, you’re chewing too much.”

“A boneless, skinless turkey breast is good, quality lean protein,” says Roger Todar, chef-owner of Christina’s Grill and Bar in Durango, Colo., where one of the most popular menu items is a marinated turkey tenderloin sandwich.

“I just love citrus marinades,” Todar says. “Garlic is such a bass note, and when you use citrus and basil, you’ve really got some high notes in there to help put a little sparkle on it.”

Although seafood dominates the menu of Atlantic Grill in New York City, executive chef Caesar Lopez says that a turkey salad entrée is one of the top three sellers at lunch. For the salad, Lopez tosses chopped turkey, avocado, tomato, roasted golden beets, bacon, egg whites, cherry tomatoes and romaine lettuce with Dijon mustard dressing. Lopez says that the salad uses egg whites instead of whole eggs to emphasize a lean-protein profile. The restaurant makes use of the yolks for caviar service.

Greg LaPrad, executive chef at Quiessence Restaurant and Wine Bar in Phoenix, approaches turkey salad differently—he confits turkey legs or thighs in duck fat or pork fat to use in a salad with arugula and fresh peaches in a honey vinaigrette. The confit preparation, says LaPrad, “preserves the turkey and it seasons the turkey really well, so you get that salt penetration all the way through the meat.”

“Really, serving it cold or at room temperature, it keeps it nice and moist,” he says, “so you don’t have that dry turkey people associate with cold cooked turkey.”

For more than 100 years, turkey has been an important ingredient at Huber’s Restaurant in Portland, Ore.

“My great uncle went to work for Mr. Huber in 1891,” says Huber’s vice president and co-owner David Louie. “Back in those days, if you bought a drink, you got a free turkey sandwich. Then when Prohibition came along, the old bar was going to close, but then patrons encouraged my great uncle to just serve the turkey, so that’s what he did.”

Louie estimates that 80 percent of Huber’s guests order some kind of turkey dish. The best seller year-round is the traditional turkey dinner, with sliced turkey, stuffing, mashed potatoes and vegetables. Now, in spring, the restaurant currently roasts about four whole 21- to 22-pound turkeys plus two to four turkey breasts daily.

“We have a combi-oven that’s injecting steam into the oven cavity as it’s blowing hot air,” Louie says.

For another popular dish at Huber’s, the cooks sauté a 6-ounce portion of turkey breast that’s been dipped in flour, egg wash, and a mixture of panko breadcrumbs and slivered almonds. Slices of the sautéed turkey top a salad of fresh spinach that’s lightly wilted with warm Mandarin orange dressing. The plate is garnished with Mandarin orange sections and diced red pepper.

Turkey is also a specialty of the house at Rosine’s Restaurant in Monterey, Calif., which roasts about 40 turkey breasts in its convection ovens every week.

Rosine’s turkey choices range from traditional turkey-with-trimmings to a turkey dip sandwich to a fiesta salad that pairs turkey with refried beans, guacamole, sour cream, Jack and cheddar cheese, and lettuce. A lighter seasonal offering uses chopped cold turkey with cranberries, Gorgonzola cheese and field greens in a Champagne vinaigrette. You can even start your day with turkey at Rosine’s, with a turkey avocado and mushroom Benedict. It’s a toasted English muffin topped with 4 ounces of sliced fresh turkey breast, sliced avocado, three poached eggs, sautéed mushrooms and Hollandaise sauce.