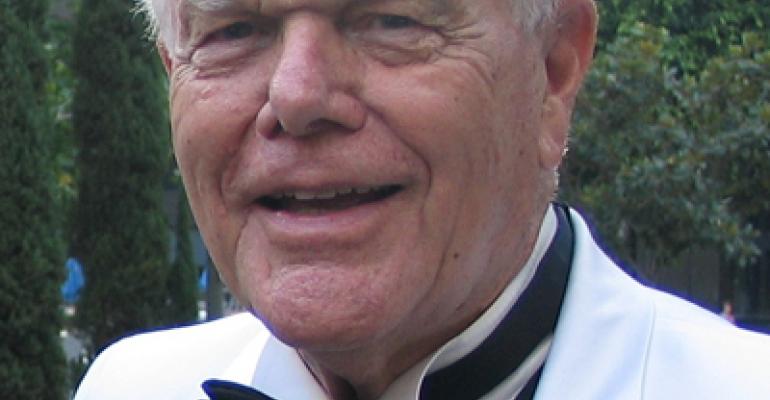 After buyout, a new day for Sizzler

Jim Collins, veteran Sizzler exec and member of the new ownership team, discusses the chain’s past and future

When the 178-unit Sizzler chain was acquired last week in a management buyout by a team that included industry veteran Jim Collins, it seemed to him like a homecoming.

Collins was there in 1958 when his friend Del Johnson opened the first Sizzler, a budget steak joint in Culver City, Calif., which offered 99-cent steaks and green salads.

Collins, then a hamburger stand operator across the street, helped Johnson convert the space and loaned him equipment. In 1967, when Johnson was ready to retire, he asked Collins to buy the burgeoning Sizzler chain, and he has had a hand in the restaurant ever since.

“I eat at Sizzler at least once a week,” he said. “It’s terrific and I think it’s just going to get better.”

The private equity company didn’t want the U.S. arm of Sizzler, which allowed Collins and the management team to bring the Culver City-based brand back home.

Now, Sizzler chief executive Kerry Kramp, also part of the new ownership, is growing the company again. Three franchised locations and two corporate units are scheduled to open before the end of 2012.

Sizzler has returned its focus to its food, with most dishes made in-house and the salad bar playing a supporting role to food prepared in the kitchen. The chain is also remodeling, attempting to carve out a niche within the growing fast-casual segment.

Collins said the challenge ahead is to bring back the customers who once loved Sizzler.

“I have a lot of friends who used to eat at Sizzler and they don’t say they don’t like it anymore because it’s dirty or the food’s not good,” he said. “They just don’t think of going there anymore. We have to get them back. We have to drag them through the door and get them to try it again.”

Collins said the brand has as much relevance today as it did in 1967.

“You watch,” he said. “I think our brand has potential, if it’s done right. I’m standing back here and I’m glad I’m a shareholder.”

A look back at Sizzler

“They weren’t using good quality meat,” he said. “[So] we switched to a higher quality product.”

The following year, the company opened a “new-image” Sizzler that still offered affordable steaks, but also had a modest salad bar. It later evolved into a buffet concept with a limited-service format.

After “having an argument” with then-KFC franchisor PepsiCo in 1991, Collins sold his 209 U.S. KFC units in to the franchisor, but kept about 75 international locations.

Collins Foods International then became Sizzler International and Collins became chairman, though some accounts described him as retired.

“We had about 640 stores and we had made some leases along the way that had some pretty high rent,” Collins said. “When sales dropped off, we had a lot of stores that weren’t profitable.”

In 1996 Sizzler filed bankruptcy, emerging the following year as a smaller chain after closing 140 locations. By 2000 Sizzler was evolving again, this time steering away from the buffet aspect to focus on kitchen-prepared food.

That year the company acquired the San Diego-based Pat & Oscar’s chain, which had five units that Collins said were, “real barnburners,” with lines out the door.

However, “we paid too much for it,” he said, and expansion into Orange and Los Angeles counties did not go well for that brand. Though they grew the chain to about 15 units, Pat & Oscar’s was later spun off in a management buyout.

In 2001 the company changed its name to Worldwide Restaurant Concepts (WRC) due to the addition of Pat & Oscar’s and KFC’s mostly Australia-based operations. Collins still regrets the change because it didn’t reflect what the brand represented.

In 2005, WRC was acquired by the private-equity firm Pacific Equity Partners, or PEP, in Australia, which continued to shape Sizzler into a modern-day brand. Kevin Perkins, a former Sizzler chief executive who has been with the brand for 35 years, is chief executive of the Collins Food Group in Australia that operates the international Sizzler and KFC operation. He is now majority owner under the management buyout, said Collins.