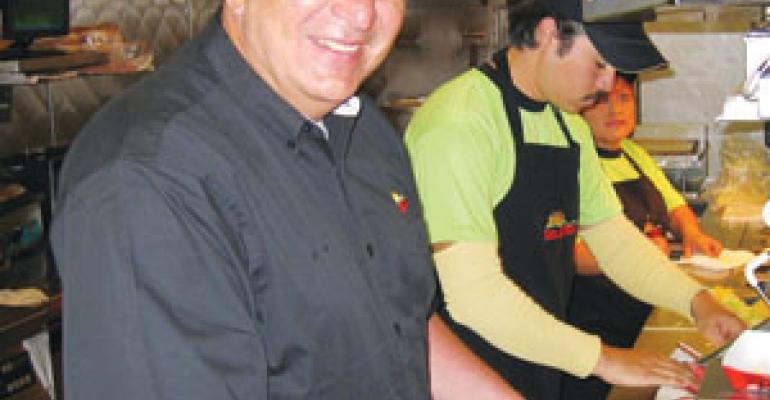 ADay in the Life: Operations Executives

Arnold Dominguez knows it’s going to be another one of those doom-and-gloom staff meetings when the person in charge of purchasing opens by saying, “Please don’t shoot the messenger….”

Invariably of late, the report from purchasing is about rising food costs. For Dominguez, the vice president of operations services and training for Del Taco, a 500-unit quick-service chain based in Lake Forest, Calif., that means the increasingly difficult challenge of finding ways to maintain margins.

Dominguez has been forced to think hard about the way things are done at Del Taco. It’s his job to make sure food quality and customer service don’t slip at the hybrid chain, which offers a traditional Mexican menu alongside burgers and fries. But, even more so than usual these days, the cloud of rising costs lurks behind every decision.

Cheese prices, for example, have shot through the roof, and it’s an ingredient used in almost every item on the menu. When the marketing department came to him recently with the idea of a quesadilla promotion, however, Dominguez didn’t nix the plan or even suggest cutting back on the amount of cheese used.

Instead, he looked at the process.

Because cheese is grated daily in house, Dominguez tested the item after sharpening the cheese grater blades. The result was dramatic, turning what appeared to be an unprofitable item into a profitable one.

It was a “big a-ha moment,” says Dominguez.

“Operators tend to go after the line employee and say, ‘You’re over portioning,’” he says. “But if we can’t deliver on yields, they can’t deliver.”

As quickly as possible, every restaurant received new cheese grater blades and training guidelines about how to maintain their graters to ensure more exact yields. Dominguez also started looking at other operational procedures, such as the dicing of tomatoes and cooking of beans.

He is involved in the development of every menu item from conception to execution. Lately, however, it has been difficult to develop items with new ingredients. It’s less costly to work with existing ingredients already under volume-purchasing contracts, he notes.

“The crystal ball is kind of broken right now,”he says.“As soon as you decide to go with a new thing, it seems to go through the roof.”

In May the chain will offer a value-priced bean-and-cheese burrito deal, designed to be a higher-margin item using existing ingredients that offers the promise of a fill-you-up meal for consumers watching their pennies.

Dominguez, however, doesn’t just look at operations from his chair at company headquarters. Most days, starting at 7 a.m., he visits two or three units, checking on food quality, customer service and point-of-purchase materials.

He makes a point of spending time talking to employees to see how well directives from the corporate office are being received. “That’s where I get the best pulse of the business,” he says.

When he arrives at the office, his first task is to spend time with variance reports, tracking the inventory of roughly 10 key ingredients. Those reports help him recognize where there may be problems to address, either systemwide or at the unit level.

Dominguez, who typically skips lunch, then moves on to customer feedback reports.

“Customers can give real specific feedback,” he says, on anything from the temperature of a menu item to perceived value, which often means portion sizes, another food-cost touchpoint.

All the while, he also must address the routine operational issues, from building maintenance to equipment malfunctions at the chain’s 285 company-owned units. Dominguez works in concert with his counterpart on the franchise operations team, which helps with the 228 franchise locations.

“It takes a village to make this move,” he says.

Dominguez also serves on a special projects team, which is about to launch a new “hot, hot sauce” called Del Inferno. The new condiment costs about 50 percent more to produce because of the ingredients and packaging. That means portioning is crucial, says Dominguez.

The rollout will include training for cashiers so they are able to communicate the new sauce’s difference in taste, as well as teaching employees to limit how many sauce packets they hand out.

Most days Dominguez leaves the office around 6 p.m. or later, and often stops at a few more Del Taco units on the way home—unless he is traveling, which is often.

Weekends are for grandchildren, but he’s never without some technological connection to Del Taco.

On a recent trip to Syracuse, N.Y., to open a new franchise unit, John Votino noted that right now is the most interesting time in his 33 years in the foodservice business.

As vice president of franchise operations for Quaker Steak & Lube, a 24-unit casual-dining chain based in Sharon, Pa., Votino says he is facing potential collateral damage to margins caused by rising gas and commodity prices like he’s never seen before.

Last year, the company began evaluating every menu item—from recipe to plate—to look for ways to eliminate waste and shave expenses. “We found out we weren’t as sharp as we thought we were,” he says.

They also found subtle ways to save money.

For instance, the “Four Wheeler,” a platter featuring several appetizer options designed to be shared by four people, was consistently coming back with waste. Votino found profit margins were improved simply by the removal of one onion ring. “We were over portioning,” he said.

The chicken-wing-intensive chain also re-engineered the delivery vessel, decreasing the number of cardboard wing “boats” by four or five per table, and thus reducing the cost of paper goods.

In addition, some of the 19 flavors of wings were being over sauced, Votino found, so the sauce ladle specifications were altered. Employees also were better trained to scrape sauce out of containers for maximum yield.

In looking at the beverage program, Votino found that too many employees were filling drink cups only half full with ice, when specifications called for three-quarters of the cup to be filled with ice.

Votino also researched the way employees were pouring beer. About 22 percent of sales come from the bar, and about 80 percent of that comes from beer. Rejiggering the CO2 pressure, getting the temperature right on glasses and training employees to pour the right “head” helped reduce beer costs by 2 cents to 4 cents per ounce.

“Every ounce counts,” says Votino, who has been with Quaker Steak for two years. “I have always believed that if you take care of the pennies, the dollars will take care of themselves.”

On this particular trip to Syracuse, there are other examples of changes that have resulted from the increased focus on cost savings.

In the past, the opening team worked with franchisees for 10 to 12 days. Now the team stays eight to 10 days, saving on hotel and other expenses.

And, similar to all new units now, the Syracuse location has a kitchen display system. Votino tested the system in the three corporate stores and saw a return on the initial $24,000 investment through speedier ticket times within six months.

Typically, Votino’s day begins at 6 a.m. with the checking of email at home. By 10 a.m., he is visiting restaurants, often staying through lunch to watch ticket times and see what ends up in the trash. Votino works with the three company-owned units, but also with franchise locations and three express outlets in sports arenas.

Usually, he stays into the afternoon to meet with managers and owners. But on the second week of each month, he spends more time in the corporate office, meeting with purchasing, marketing, and research and development officials to look for ways to reduce costs.

With an average check of $15.38, Quaker Steak is positioned as a value option in casual dining. Despite the macroeconomic climate, Votino says guest counts and sales are only slightly down this year.

“We have to operate better and more efficiently,” says Votino. “We’re going to keep looking at the ‘why.’ Every day I wake up with the realization that we’ve got to be better.”

It’s mid-morning and David Stork, director of operations for Patina Restaurant Group at the Music Center at Walt Disney Concert Hall in Los Angeles, is checking the soups.

Patina operates a spectrum of foodservice outlets at the Music Center, from the more than 30 snack bars available during intermission to the flagship fine-dining venue Patina.

There are reports to read and numbers to track, but most of Stork’s day is spent moving from one restaurant to another within the massive performance hall.

“I have a tough time sitting behind a desk,” he says.

Like the conductor of the symphony performing on the concert hall stage, Stork choreographs operations throughout the venue, with a particular eye these days on making the most of every ingredient.

A rotisserie chicken from the more-casual Kendall’s Brasserie and Bar, or crab and lobster shells from white-tablecloth Patina will likely contribute to the stock for any of the house-made soups or glazes, he says.

Rising food costs play into every conversation about the sales of each outlet, says Stork, but cutting back on portion sizes or using cheaper ingredients isn’t really an option.

Because the Music Center is one of the city’s premier venues, Stork says he feels strongly that Patina Restaurant Group must ensure a premier dining experience.

“We all clearly know from the onset that we can’t do anything that would affect the guest experience,” says Stork. “I’d rather take a slight hit in EBITDA than lower quality.”

“He pulls his entire walk-in apart every day and counts everything,” says Stork. “He never over orders.”

Stork tries to stay ahead of events to save money through consolidated purchasing. The group handles catering at the venue, with parties ranging from 350 to 2,000 people. With enough lead time, combining the purchasing for several events can help to reduce costs with volume buying, he notes.

Despite the economy, sales at the Music Center have remained steady, because they depend largely on the schedule of performances.

Catering sales, however, have dipped in recent months. “That’s disposable income,” says Stork. But because the Music Center is also a hub for political events in Los Angeles, the election year ahead offers much promise.

During his 11-hour days prowling the Music Center, Stork typically works closely with general managers, looking at “who ordered what,” arranging for the care of VIPs, and talking to guests.

“If we know a certain table likes a certain kind of wine, we make sure that’s available,” says Stork, who began his career as a server at Patina years ago. “We keep extensive notes on guests to know what they want when they come in.”

Once or twice each day, Stork is in touch with Joachim Splichal, the chef/founder of the restaurant group. He also meets regularly with representatives for the philharmonic and opera companies that perform at the Music Center.

By 8 p.m., when performances start, Stork usually heads home to his 2-year-old twins—unless there’s a gala event scheduled after a show, which means a later night, even though he’s back on the floor at 9 a.m. the next day.

“I spend a lot of time in kitchens,” says Stork. “I think there’s very little better in life than a good meal.”