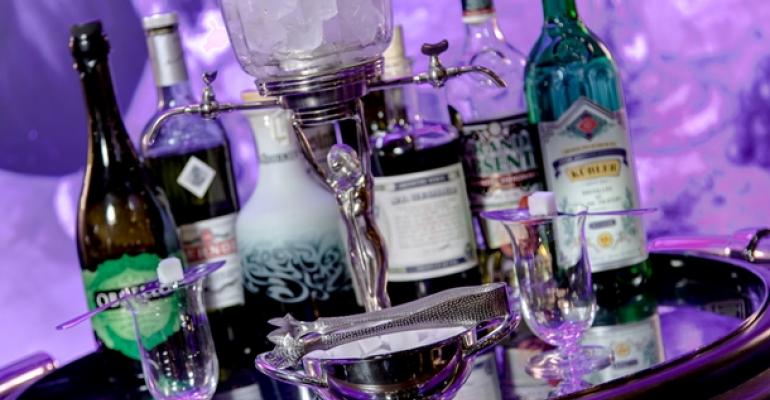 Absinthe returns to the spotlight

After nearly a century on ice, absinthe is back on the street. Served as a mysterious milky elixir, fashioned into creative cocktails or set aflame and drunk by the shot, the heady, anise-flavored spirit with the bad-boy image is a magnet for novelty seekers, some restaurant operators report.

Because of the alcohol’s notorious past, it took nearly a century for authorities to decide that authentic absinthe was no more harmful than any other form of alcohol, and the first legal absinthes entered U.S. distribution in 2007. Ever since, some barkeeps have let their imaginations run wild.

“I still have customers who come in and expect a hallucinogenic experience with absinthe,” said Stephen Cole, bartender-manager of the Violet Hour, a speakeasy-style bar in Chicago. He created a cocktail called 2 To 2, made with absinthe, Aperol, lemon juice, simple syrup and orange bitters. It’s a nod to the legend of Jean Lanfray, a Swiss farmer who in 1905 allegedly murdered his family while on an absinthe bender. Lanfray was said to binge on a variety of alcoholic beverages from 2 p.m. to 2 a.m. daily, according to the police report, Cole said.

Stories like that have created the absinthe legend. In the late-19th and early-20th centuries artists and intellectuals favored it as a boon to creativity. However, absinthe ran afoul of moralists who painted it as an addictive, psychoactive substance that led users into crime, violence and immorality. By the First World War, absinthe was banned in many European countries and the U.S. Anise-flavored spirits like pastis, Pernod and Herbsaint, made without wormwood — the herb that contains a substance that at the time was believed to cause madness — emerged as substitutes.

Absinthe is now at home in hedonistic Las Vegas. At Sage restaurant in the Aria Resort & Casino there, an absinthe cart in the dining room serves the spirit to an average of 15 patrons per night and sometimes as many as 50, priced at $25-$35 per shot. Listing the brands on the dessert menu under the heading “recently legalized absinthe” and rolling it around on the cart have made customers eager to try the stuff, said general manager Tobias Peach.

“This is Vegas, ‘Sin City.’ People think it’s a little dangerous. It all fits,” said Peach.

The cart is stocked with eight absinthes from France, Spain, Switzerland and California. Customers may choose traditional absinthe drip service or a more theatrical Russian service involving fire. In the former, a slotted spoon with a sugar cube is placed above a glass of the spirit. A slow drip of ice water from an absinthe fountain dissolves the sugar cube and creates the louche, or cloudy, appearance that shows it is properly diluted for drinking.

In Russian service, the server ignites a shot of absinthe in a wine glass and pours the flaming spirit into a tumbler of orange juice. He quickly inverts the wine glass onto a napkin on the table and instructs the guest to inhale the fumes in the glass with a straw, and then shoot the juice drink.

About three-quarters of absinthe customers at Sage go the fiery route.

Given the pronounced anise flavor and potency of absinthe — upwards of 140 proof in some brands — recipes for classic cocktails like the Sazerac, Monkey Gland and Corpse Reviver #2 call for it in small amounts. At Stoddard’s Fine Food & Ale in Boston, head bartender Jamie Walsh makes the Sazerac with rye whiskey, sugar cubes and two types of bitters in a glass merely rinsed with absinthe. Just a bar spoon of absinthe goes into The Happy Fanny, an original drink that also has Gosling's Rum, Green Chartreuse, lime juice, simple syrup and bitters.

At Arnaud’s French 75 Bar at Arnaud’s Restaurant in New Orleans, head bartender Chris Hannah uses one-quarter ounce of absinthe with brandy, Aperol and Dubonnet Rouge in his cocktail La Belle Femme. However, he pours a whopping two ounces of absinthe into a concoction called the Necromancer, along with Crème Yvette and Strega.

Hannah predicted that as bartenders become more familiar with the spirit, they will create more absinthe-forward cocktails.

“In the future, absinthe will move from being a modifier in cocktails to being the main spirit, if a bartender is fond of it,” he said.