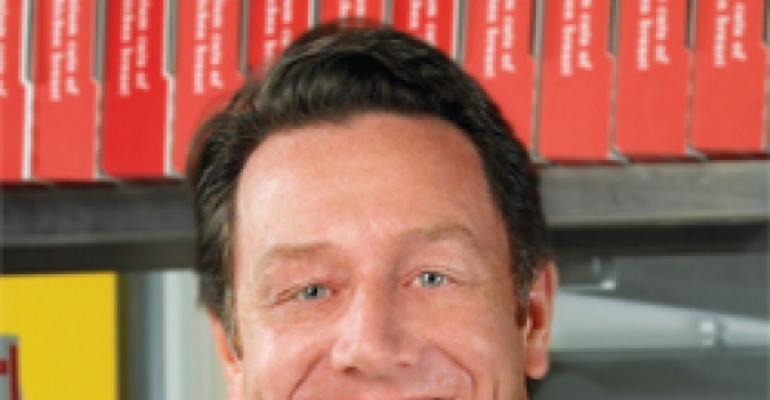 When Domino’s master franchisee in Japan revealed some unusual plans to erect a pizza-delivery restaurant on the moon, the chain’s chief executive J. Patrick Doyle joked that he was still waiting for his invitation to the grand opening.

In a way, though, Doyle, only the third chief executive in Domino’s 51-year history, has achieved his own sort of moon shot. Over the past 18 months he has successfully piloted Domino’s through a sales turnaround based on the chain’s dramatic menu innovation.

Even before his ascension to the top post at Ann Arbor, Mich.-based Domino’s in March 2010, Doyle was involved as president of Domino’s USA in a menu and marketing revamp that led to the brand’s reformulated core pizza and a transparency-focused ad campaign that often had him starring in national commercials.

Though he’s only been chief executive in a struggling economy, Doyle’s efforts have led to a same-store sales increase of 9.9 percent for fiscal 2010 in Domino’s domestic system.

“Restaurants who really have their act together are prospering, but it’s a fairly unforgiving environment,” Doyle said. “I think you’re seeing a lot of separation in terms of overall performance in the industry based on how aggressively people are managing their businesses.”

University of Michigan athletic director David Brandon, current chairman of Domino’s board and Doyle’s predecessor as chief executive, selected Doyle to lead the company’s international division in 1999 after two years as senior vice president of marketing.

Doyle ran international so  successfully that Brandon brought him back stateside in 2004 to lead the chain’s domestic corporate-store system, and then created the role of Domino’s USA president in 2007 so Doyle could lead all domestic restaurants.

“I give Patrick a lot of credit, because he was in a position at international where he’d built a very good team, and it would have been easy to settle in and be comfortable,” Brandon said. “My message to him was that he wasn’t going to learn a lot more with another year or two running a well-oiled machine.”

Neither Doyle nor Brandon could have foreseen a learning experience as formative as the recession that began in 2007 and worsened in 2008. Tim McIntyre, Domino’s director of corporate communications, remembered the leaders refusing to worry about external pressures and focusing on what they could control within Domino’s headquarters. Doyle created a task force to halt traffic declines in the domestic system.

“What we got from Dave and Patrick in 2008, a rough year for everybody, was a no-excuses expectation,” McIntyre said. “It could have been easy for us to just say, ‘Oh, it’s the economy, and nobody’s buying pizza,’ but that wasn’t good enough for Patrick.”

That work was nearly derailed in 2009, when a video of Domino’s employees tainting food went viral on YouTube a few days after Easter. Doyle canceled a family vacation to Miami, flew back to Michigan and decided to film a response, putting himself in front of the camera.

“Between the time he walked into my office and his one-take video hit YouTube, it was less than an hour and a half,” McIntyre said. “That exemplifies him finding a problem and fixing it. That response turned this thing around.”

For Brandon, Doyle’s whole career as a leader sticks out more than any single moment.

“We worked together closely for 11 years … and during that time we had 9/11, Hurricane Katrina, cheese prices and gas prices going to their highest levels in history, and a financial meltdown,” Brandon said. “With Patrick, what’s most important is the total body of work and his ability to stay cool under pressure and be an effective leader in times of high stress.”

During the successful program to reinvent Domino’s core pizza and brand image, “Patrick’s leadership was really in giving people permission to innovate and confront the realities and the hurtful truths,” McIntyre said. “The thing about him is you know what you’re getting. He’s been the same optimistic, energetic, positive- energy person throughout his time here.”

When Brandon named Doyle his successor, he knew the new chief would not stop at the sales turnaround brewing in 2010.

“[Doyle] has a lot he wants to prove, so that passing of the baton was a healthy thing for our brand,” Brandon said. “It gives me, as chairman, a great deal of comfort knowing we have a leader who’s so energized to come into work every day.”

Doyle acknowledged that the reinvented pizza and marketing were metaphorical touchdown passes. But he harkened back to the legendary Wolverines football coach for whom Brandon played in the 1970s to describe why nobody at Domino’s would be content with sitting on a lead and running out the clock.

“How do we not get complacent?” Doyle said. “[Michigan coach] Bo Schembechler said that you either get better or worse every day; you can’t stay the same. We think about how to get better every day, and sometimes it’s big, visible changes like our new pizza or chicken. But there also are lots of other things going on for service levels, managing pricing or buying energy for our stores.”

If anybody starts letting up, he added, he’ll evoke how 2008 felt until everybody gets back to work. He continues pushing innovation beyond the menu.

“We’ve leveraged technology as effectively as anybody,” Doyle said. “We now do a large portion of our business over the Internet and on iPhones.”

Continued innovation is all in the name of driving franchisee profitability, he said.

“I give our franchise system enormous credit for managing the level of change we have had the last couple years,” Doyle said. “It’s not easy, and they’re doing it in a difficult environment. If you just throw things at them, you’re going to fail. Ideas only work because the system gets excited about them.”