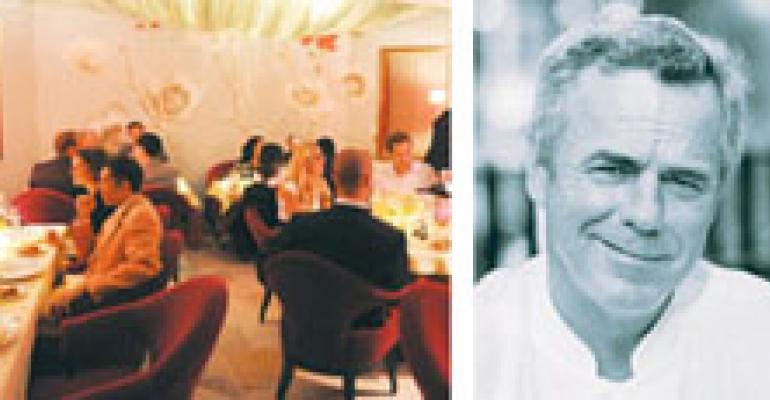 When chef David Bouley was once asked if he examined the dirty dishes brought back to his kitchen, as he was rumored to do, he answered, “Yes, and you didn’t eat your fava beans.”

The chef then asked the diner why the plate wasn’t finished, exhibiting the kind of hyperawareness that partly explains why Bouley, the restaurant, is still thriving after 22 years and three locations in New York City’s Tribeca neighborhood.

“Paying attention to detail,” as Bouley puts it, and making the restaurant “compelling enough to come back to,” ensured survival when it first opened in Tribeca, which was not a dining destination at the time.

“It is a whole different world now,” the chef-owner says of the busy residential and dining neighborhood. However, the newest location, which opened late last year, is designed to move guests far from Manhattan.

“It transports someone clearly to the south of France,” Bouley says. “After a few moments they are no longer in New York.”

Restaurant guests are greeted with a “Renaissance” door. Inside, the dining room is illuminated with light fixtures made by European artists, Bouley says.

“It is old-fashioned romantic,” says New York Times restaurant critic, Frank Bruni (Click here to hear more from Bruni through a Times interactive presentation). “It is both astonishing and reassuring, particularly at this point of time, that David Bouley poured so much money into the space.

“The look of the restaurant goes against the grain of what most restaurants are doing now—more minimalistic and sleek,” Bruni adds. “It is top to bottom luxury romanticism.”

“It is a sort of classically scrumptious feast,” Bruni says, describing the dining experience. Typically diners put their entire experience in the hands of chef Bouley. In fact, he says that over 80 percent of his guests sample the food with a $170 seasonal tasting menu including wine pairings.

Pennsylvania chicken baked en cocotte with alfalfa and clover hay, fresh fava beans and fiddleheads ferns, a hot-selling staple currently featured on the à la carte menu, feeds two and sells for $72. To prepare it, Bouley puts the bird with the alfalfa and clover hay in a lidded pot and seals it with dough to keep the aroma encased. When opened at the table, a scent of “caramelized meat and clover” hay perfumes the dining room, Bouley says.

He starts cooking the bird in a 400-degree oven and lowers the temperature gradually until it’s 135 degrees. It cooks for exactly “one hour and 29 minutes,” Bouley says. “We cooked 50 birds to get it right.”

Bouley has expanded his Tribeca dining business with a bakery, butcher and steam table prepared-food concept using the same techniques that have worked to run his fine-dining businesses, he says.

“You just have to pay attention, have good staff and listen to the customers,” Bouley explains. “Every week we do better than we did before. Even if we did something 100 times before.”

But Bruni reports that “fireworks” at Bouley explode when it comes to sweet selections, which are typically served in generous portions. “The desserts are the strongest part of the meal there,” he says.

“It is clear that he wisely invests in the dessert segment of the meal. Dessert is a parting impression,” Bruni adds. “First and last impressions are critical. He wants the last impression to be, ‘Wow, I got a whole lot of pampering tonight.’”

One Hundred and Seventy Dollars with Wine Pairing