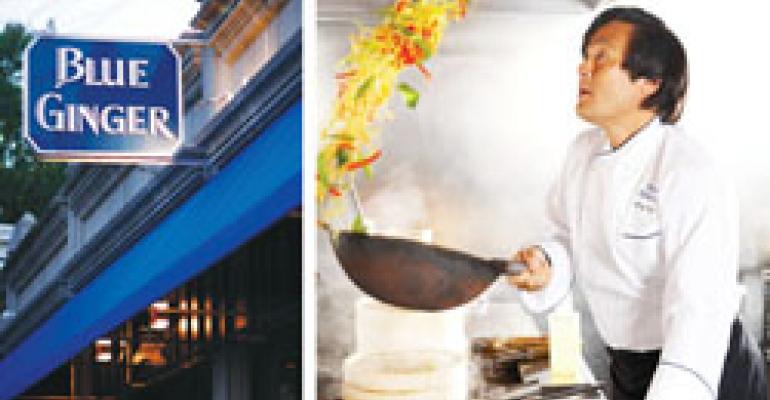 “The key to the success is that I hired well and continue to hire well,” Tsai says, noting that his trusted staffers “ultimately are the success of the restaurant.”

Blue Ginger, which blends Eastern flavors and ingredients with Western techniques, has been humming along for more than 11 years. It is the first and only restaurant that the 1989 Cornell University graduate has owned.

Blue Ginger, which is located in the town of Wellesley, Mass., 10 miles outside of Boston, recently added 60 seats and a bar area that Tsai says allows him to offer lower-priced fare like Ming’s Bings, which are Asian-style steamed buns. The extension, which opened in May 2008, has helped the high-end operation weather the economic downturn.

Timing has always been one of Tsai’s strengths, he says. Just a few months after Blue Ginger opened in 1998, his inaugural television show, “East Meets West,” debuted on the Food Network.

Tsai calls “East Meets West” the most valuable marketing he could have imagined. Mat Schafer, restaurant critic for the Boston Herald, agrees that the exposure has been a boon to Blue Ginger.

“You can’t negate the influence of the TV show,” Schafer says. “Back when Blue Ginger opened, it was right at the time when people were getting interested in watching TV food shows.”

Tsai says the location of Wellesley was a bit of a lucky break as well. He wanted to open in Boston proper, but in the heyday of Internet startup money, real estate was at a premium. He wanted at least 100 seats and couldn’t find an affordable space in the city.

“You can’t really make money on a 50-or 60-seater,” he says. “I wanted the magic formula that Cornell teaches you: 100 seats or 100 rooms for a hotel to make money. Obviously, I am not just in it for my health; I am in it to get my kid through college.”

The demographics of Wellesley also worked for Tsai.

Even as he lauds the people that make Blue Ginger successful, Tsai continues to keep a close eye on the restaurant.

“I [taste] everything I can possibly try,” he says, “including the boiling water, to make sure there is enough salt in it.”

Tsai’s motivation for that type of hands-on management is simple. He feels the pressure to perform every night.

“Half the time it is someone’s first time at Blue Ginger,” he says. “They just drove in from New York or Nebraska. If it is not a spot-on perfect meal, they are disappointed.”