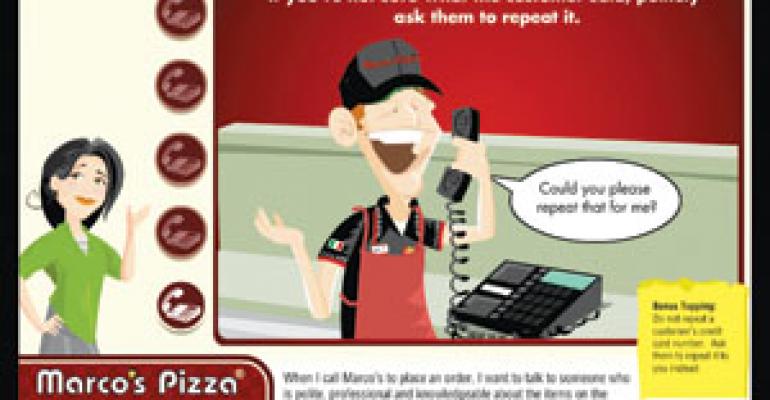 The movement to WEB-ACCESSED, CENTRALLY HOSTED BACK-OFFICE SOFTWARE AND SERVICES—including those for purchasing, inventory, production, human resources management and scheduling—gained momentum. Some operators cited as the reasons for their choice of such platforms ease of use; simplified deployment, maintenance and data collection; and, in some instances, lower up-front capital costs. Also seemingly on the rise was the number of operators deploying or enhancing business intelligence systems that aggregate data from multiple units for analysis and reporting purposes, as well as the number of users of technology and services supporting consumer online ordering and payment for take-out, delivery and curbside-pickup business.

HAND-HELD POINT OF SALE SYSTEM TERMINALS were tested at select units by several chains—including fast-casual Chipotle Mexican Grill Inc. of Denver, casual-dining specialists T.G.I. Friday’s of Carrollton, Texas, and On the Border Mexican Grill & Cantina of Dallas—or were permanently in place at others, such as independent Sam’s Chowder House in Half Moon Bay, Calif. That quartet reported that the portable POS terminals could reduce service times, and the full-service operators indicated the devices also could improve guest perceptions of service or build checks. Chipotle president Monty Moran said the learning curve for the tool used as a line buster by his organization is “much steeper than we had anticipated,” but added, “Managers, who have really stuck with this, have literally been able to set new sales [and] throughput records.”

WIRELESS TERMINALS permitting guests to swipe their own payment cards at the table or curbside, for security or convenience reasons, were introduced at more restaurants, including some locations of the Claim Jumper chain. Irvine, Calif..-based Claim Jumper reportedly planned to add the devices for curbside business at all 45 units by year’s end.

E-MAIL MARKETING, which is fairly widespread today, was augmented in some circles by digital coupons for mobile devices, à la Caribou Coffee of Brooklyn Center, Minn., and Taco Bueno of Farmers Branch, Texas, or by text-message-based promotional initiatives, such as those by Covington, La.-based Smoothie King and Happi House Restaurants Inc. of San Jose, Calif.

TO STANDARDIZE SYSTEMS for improved support and simplified management or to secure more favorable purchasing terms, or both, some franchisors moved forward with plans to reduce the number of approved vendors from which their company stores or franchisees can buy POS systems. Among them were Camille’s Sidewalk Cafe parent Beautiful Brands International of Tulsa, Okla., and Cousins Submarines Inc. of Menomonee Falls, Wis. The Juice It Up! chain of Irvine, Calif., said it not only had selected a single POS technology provider, but also, for cost savings and data collection reasons among others, was converting systemwide to a centrally hosted, Web-based POS platform funded through user subscription fees.

PAYMENT CARD DATA SECURITY remained top of mind with the release of the Payment Card Industry, or PCI, group’s Data Security Standards version 1.2. Also keeping the issue front and center were disclosures that some operators, including Dallas-based Dave & Buster’s ,and Golden, Colo.-based Boston Market ,suffered data breaches at the hands of hackers.

Pizza Hut of Dallas, Domino’s Pizza of Ann Arbor, Mich., and Papa John’s Pizza of Louisville, Ky., continued to battle each other with leading-edge, customer-facing ONLINE-ORDERING AND MARKETING TECHNOLOGIES. Among the initiatives by some or all three were the development of interfaces for online ordering at social-networking websites; greater support for online ordering via cell phones and other mobile-communications devices; strategic agreements with the likes of digital video recorder services provider TiVo; and tests of so-called “2D” bar codes using software and cell phone cameras to effortlessly pull mobile consumers to promotional or informational websites.

WEB-BASED TRAINING TECHNOLOGIES were added by a number of chains, including Marco’s Pizza of Toledo, Ohio, which launched the interactive “Marco’s University” using animated content and video, or added to by others, such as Culver’s Frozen Custard of Prairie du Sac, Wis. Some operators, including three-unit Bluewater Grill of Southern California, self-authored and distributed training materials using Internet tools exclusively, while others followed earlier adopters, including T.G.I. Friday’s, in deploying learning management systems that track, analyze and report on employee progress using computerized and conventional training methods. McAlister’s Corp. of Ridgeland, Miss., saw growing numbers of franchisees of its McAlister’s Deli chain join the franchisor’s 32 units in bolstering in-restaurant training by using hand-held multimedia players loaded with relevant text and graphical content.

TRIALS OF KIOSKS that enable quick-service guests to place their own orders and, in some cases, pay for them, continued this year at chains such as San Diego-based Jack in the Box ,which has them in use at more than 30 locations and plans to increase that number, and selected franchised Hardee’s restaurants operated by Geneva Enterprises LLC of Duluth, Ga., and Boddie-Noell Enterprises of Rocky Mount, N.C. Carl’s Jr. franchisee Star Chasers Oklahoma Inc. of Oklahoma City used two or more kiosks in 31 of its 39 restaurants in addition to conventional counter service to boost guest throughput during relatively short major meal periods. Some operators claim average-ticket lift of up to 25 percent using kiosks, and others say they use them for speed of service issues, including stadium and arena operator Delaware North Cos. of Buffalo, N.Y. Still others, like Checkers franchisee FHG Enterprises of Berlin, N.J., are trying the devices to serve guests better during slower sales periods when fewer employees are scheduled or, if present, may be distracted by maintenance chores.

GUEST SELF-SERVICE TECHNOLOGY for sit-down restaurants gained some visibility when operator and technology vendor uWink Inc. of Van Nuys, Calif., opened two additional casual-dining locations, for a total of three. UWink also licensed its touch-screen technology supporting at-table ordering, game playing and payments to Delaware North Cos. for use in an airport Chili’s in Fort Lauderdale, Fla. Nine-unit Cozymel’s Mexican Grill of Dallas used at some locations table-mounted payment, marketing and surveying devices from a firm in which Jack Baum, chief executive of Cozymel’s parent, also holds an interest.