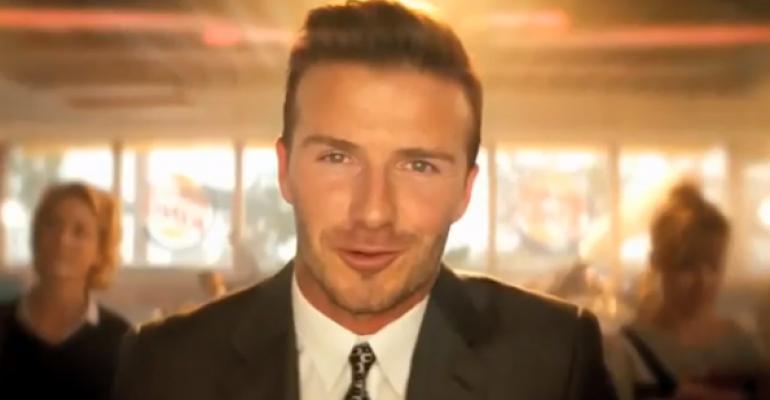 Even as some restaurant brands broke their most forward-looking marketing campaigns in the digital and mobile space in 2012, several of the industry’s largest chains proved the enduring power of television advertising as an effective medium. Here's a look at some of the year’s top campaigns, from Burger King, Taco Bell, Krispy Kreme, KFC and Olive Garden.

When Burger King launched its overhauled menu in April, the Miami-based chain sought to make a big splash with new television commercials developed around a tagline, “Exciting things are happening at Burger King.” But assuming that viewers would not take the slogan at face value from the spots’ fictional manager, Burger King enlisted celebrity endorsers, including soccer star David Beckham, comedian Jay Leno and Aerosmith front man Steven Tyler. Actresses Salma Hayek and Sofia Vergara starred in Spanish-language versions. While famous spokespeople drive up the costs for ad campaigns, they appeared to pay dividends for Burger King, whose same-store sales rose all year. 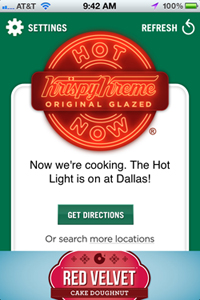 For decades Krispy Kreme Doughnuts leveraged its “hot now” sign in all of its stores to signal that its just-made doughnuts were at the peak of freshness. But at the very end of 2011, the chain put that functionality into a geofenced smart-phone app that, every time the sign was turned on at a Krispy Kreme location, sent an alert to any Hot Light app user whose smart phone indicated the person was within a few miles of the store. More than 200,000 people downloaded the app by the end of the year, which also enabled Krispy Kreme to serve up targeted banner ads for specific deals or doughnuts.

Growing Up and Getting Out: Episode 1

The launch of KFC’s snack-sized Original Recipe Bites incorporated a little bit of everything: an on-trend menu item sold in an aggressive meal deal for $3.99, humorous commercials, a branded entertainment Web series, and a “Free Rent for a Year” sweepstakes. The theme of Millennials struggling to gain financial independence and moving back in with their parents tied together TV spots for the menu item and the “Growing Up and Getting Out” series of five webisodes. The immature Millennial of the commercials convinces his landlord parents that Original Recipe Bites are more grown up than chicken nuggets, while the protagonist of the Web series seeks to move out of his folks’ house once again.

Hoping to build some momentum behind a return to same-store sales growth, Olive Garden introduced the “Go Olive Garden” campaign with several menu updates in October, including lower-calorie options and the aggressive value offer, “Dinner Today & Tomorrow” for $12.95. The deal enabled customers to order two dinners, with one served at the table and the other wrapped up to take home, similar to the popular “Classic Pastas” two-for-one deal at Maggiano’s Little Italy. The focus on healthful dishes and value marked a departure from Olive Garden’s longstanding “When you’re here, you’re family” positioning toward a play for a younger core guest.