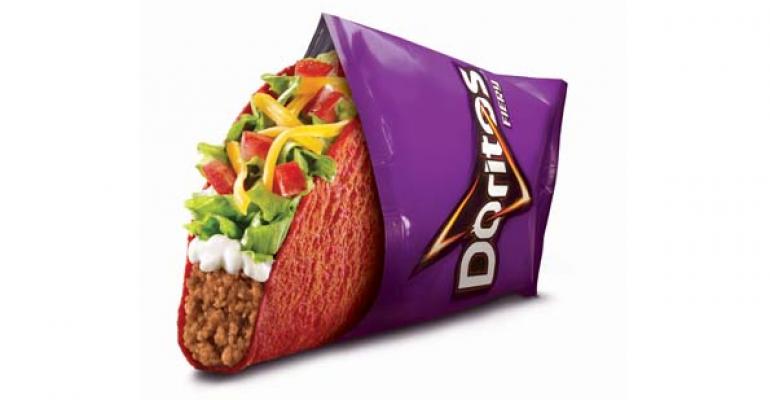 Taco Bell tapped consumers to create YouTube videos highlighting the debut of the Fiery Doritos Locos Taco this week — and officials were impressed by the response.

For each version of the taco so far, including the Nacho Cheese and Cool Ranch flavors, the Irvine, Calif.-based chain has invited consumers to contribute photos and other content used to promote the menu items through various social media channels and in advertising. For the third flavor in the DLT series, Taco Bell challenged online video producers — YouTubers, specifically — to help get the word out about the new product.

“For us, it was about starting to build a relationship with the people who are the YouTubers of the world,” said Tressie Lieberman, director of digital and social for Taco Bell.

Still, the effort was not the brand’s first. The company has long been cultivating YouTubers, inviting them to menu launch parties and engaging them on Twitter. In fact, Taco Bell had a booth this year at the annual VidCon convention, an event targeting the lovers and creators of online video, which was held earlier this month in Anaheim, Calif.

It was there that Taco Bell reached out to YouTubers and invited them to develop content around the new taco, which was scheduled to launch Aug. 22. The goal was not to ask them to make commercials, Lieberman said, but more about “having them tell their story” about the brand and the product.

Contributors were not paid, but the company invited top contestants out to a Los Angeles movie studio, where they had access to all manner of resources — including actors, editors, green screens, and movie sets — to produce a second, perhaps more professional video in 24 hours.

Lieberman said the chain got about 65 submissions and picked 15 for the LA visit, including some from YouTubers that already had a sizeable online following, such as Kaleb Nation, whose online videos boast more than 50 million views, according to his website.

Separately, some were paid for their efforts, including Freddie Wong and Brandon Laatsch, whose video about the mythical 3D Doritos Taco printer was released to their 6.3 million subscribers.

Still, YouTube being the relatively unfiltered voice of the masses, some that didn’t make the top 15 cut also posted their content, such as the LA Girls and their version: “Eat My Taco.”

Many of the videos offered viewers a secret preview of the new DLT on Monday, three days before its official launch on Thursday.

Lieberman said the response was impressive and fans loved the feeling that they were getting an exclusive first look. “They love being in the know. It makes them feel very special, like, ‘Wow, Taco Bell really gets me,’” said Lieberman.

The reach of YouTube won’t replace traditional advertising for the new DLT flavor. Taco Bell also produced its own TV spots, in-store ads and radio ads, created by Deutsch in Los Angeles, which will begin airing on Sunday, Lieberman said.

The YouTube effort, however, appeared to have an impact.

According to NetBase, which analyzes social media buzz, the new DLT got an estimated 23,467 mentions via social media between July 31 and the scheduled launch date of Aug. 22, and about 79 percent of those conversations were positive.

Almost all of those conversations – 99 percent – were on Twitter, and 60 percent of the mentions were by men in the U.S. One mention, NetBase noted, went so far as to say that the Fiery DLT was a “triumph of the human spirit.”

The 21 percent of mentions that were negative either called the product “so-so,” noted cholesterol content, said it burned their mouths or “made me angry.”

The chatter over the Fiery DLT didn’t have quite the reach of that preceding the March launch of the Cool Ranch flavor, which received 97,371 mentions from Feb. 13 through March 7, about 84 percent positive.

However, Lieberman noted that the products are very different in that Cool Ranch is a Doritos chip flavor that is well known and loved while the Fiery DLT is a bit of an unknown.

“For this one, people didn’t have the passion for the chip, but the were really curious about the flavor profile,” said Lieberman.

The latest taco shell was inspired by the Doritos Flamas chip, which is spicy with a hint of lime and available only in certain regions. “Flamas” means flames in Spanish.

Prior to the new DLT launch, Taco Bell had sold more than 600 million Doritos Locos Tacos since the product was first was introduced in March 2012, and the platform continues to be one of the most successful new-product launches in brand history.

A division of Louisville, Ky.-based Yum! Brands Inc., the 6,000-unit Taco Bell chain has the goal of doubling in sales over the next decade, from $7 billion to $14 billion.