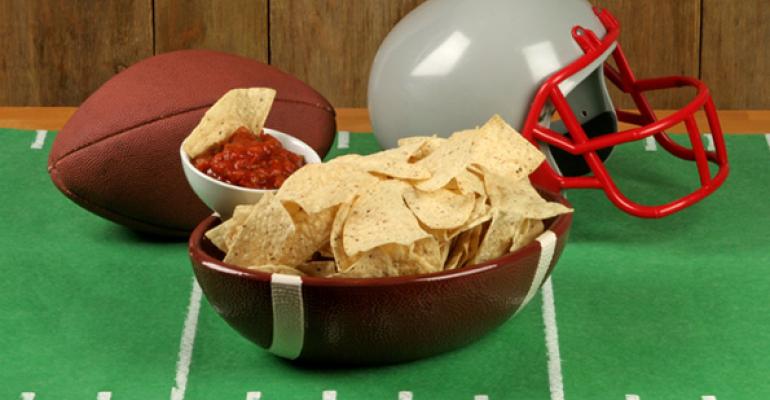 The National Football League’s regular season kickoff on Sept. 4 drew a blitz of promotions from restaurants seeking to profit from the next five months of gridiron games.

Strategies ranged from playbook standards such as new, shareable limited-time offers to high-tech games designed to deepen customer engagement on- and off-premise.

Red Robin Gourmet Burgers brought back its Tavern Double Tuesday promotion, which rewards guests with menu items when their team makes a set number of touchdowns or interceptions.

McDonald’s new Tailgate Photo Sweepstakes encourages fans to post social media pictures and videos of themselves eating Golden Arches grub while tailgating. The longtime NFL sponsor partner will reward fans with NFLShop.com gift cards and other prizes throughout the season, while one winner will receive an “ultimate McDonald’s tailgate party.” That award includes an 18-wheel-truck-turned-mobile-restaurant equipped to feed a celebration for up to 200 people in the winner’s hometown.

Buffalo Wild Wings launched a multidimensional GameBreak platform to engage its core sports-fan customer base. The system lets fans play a wide range of fantasy-style and competitive sports games in restaurants via tablet and off-premise using computers and mobile devices.

Players can win weekly prizes such as gift cards for Buffalo Wild Wings food and merchandise. The top prizes include a pair of $2,000 packages and one $10,000 Ultimate VIP Ticket Experience given to the season’s best performer. That player will win two premium seats to every home game of the team of his or her choice, gift cards, perks for pre-game “tablegating” and more.

Ben Nelsen, vice president of guest experience and innovation at the 1,030-unit chain, said the company chose to launch GameBreak during football season to tap into America’s growing passion for fantasy sports games. It also will use the platform for other sports such as college basketball and golf.

“As we go into March Madness, we will have a bracket experience, and maybe we’ll host a game around the (National Hockey League) playoffs, too,” Nelsen said. “But football is definitely our biggest opportunity since it’s so well followed, especially when you look at the fantasy sports industry.”

According to Nelsen, GameBreak is a three-tiered system that includes GameBreak Live, an in-restaurant game that tests guests’ sports knowledge of live sporting events; Pro Football Salary Cap Challenge, in which users create a roster of eight pro football players within a predetermined virtual budget; and the Pro Football Pick’em Challenge, in which players select winners of weekly games.

Since so many Buffalo Wild Wings customers frequent the chain to view sporting events while they eat and drink, Nelsen said the operator saw an opportunity to deepen brand engagement by giving them more opportunities to join the action.

“People no longer watch sports in a passive way,” Nelsen said. “You have that whole second screen concept at work with them looking at their phones. [Buffalo Wild Wings] already engages them socially, so why not get them into the game?”

The company then surveyed guests about the value of the platform and found that 90 percent said it enhanced their “sports fan experience” and that they’d play these and other games in the future while visiting Buffalo Wild Wings.

Nelsen said “just under 40,000 people” signed up for GameBreak during the season’s first week, “which is about where we hoped it would be.” He declined to share the chain’s expected total signups for the season.

He also declined to share the company’s investment in the system, which includes as many as 40 Samsung Galaxy tablets dedicated to each restaurant, but he said, “it was fairly significant … but that it drives the ultimate social experience for our sports fans.”

“Part of the fun is having friends competing with you,” Nelsen said. “They can also invite guests in the restaurant to compete in this channel. The ability to share game and player information in social media is a really attractive driver.”