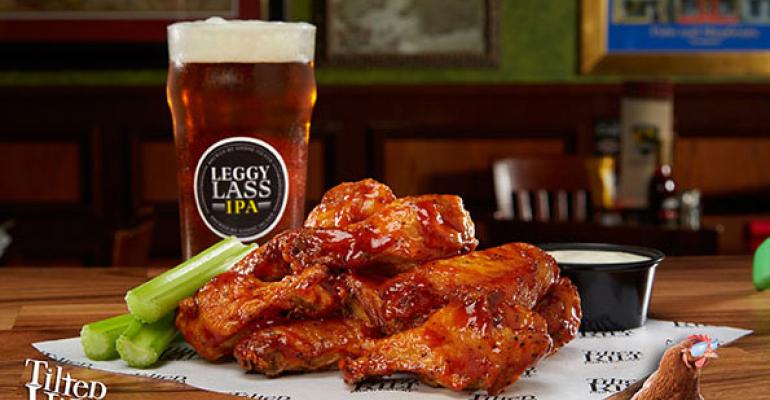 NRN editor and restaurant marketing expert Jennings breaks down what you should be watching in the industry this week. Connect with her on the latest marketing trends and news at @livetodineout and [email protected].

Anticipation is building for Super Bowl XLIX on Sunday, but for restaurants, who are expecting a big day, it has little to do with what happens between the Patriots and the Seahawks, or Katy Perry at halftime.

For those with big screens, chicken wings and beer sales will skyrocket. For those delivering — especially pizza — it could be the biggest day of the year. Football-specific catering (read: tailgating) packages will fly out the doors of every segment, from barbecue joints to white-tablecloth restaurants.

And, of course, for advertisers, it’s an opportunity to make a splash and be seen by millions on television, or to take advantage of #SuperBowl social media action.

McDonald’s is among restaurant chains planning a Super Bowl TV ad. According to its 30-second sneak peek, the chain will begin randomly accepting in February a “new form of payment,” something customers apparently find hard to believe.

Given the brand’s emphasis of late on the “lovin’” part of its “I’m Lovin’ It” tagline, will customers pay for burgers with hugs?

Carl’s Jr., as usual, will provide the sexy with its Super Bowl commercial promoting its new All Natural Burger, featuring grass-fed, free-range beef with no added hormones, steroids or antibiotics.

The spot, titled “Au Naturel,” features Florida-born model Charlotte McKinney walking through a farmer’s market. Oh, and she may or may not be wearing clothes behind those grapefruits.

The ad, it should be noted, is generating some controversy.


Papa John’s Pizza, meanwhile, is an official sponsor of the NFL and the Super Bowl. This year it is offering free pizza, starting Thursday.

Customers who place an order of at least $15 online using the promo code “SUPERBOWL” between Jan. 29 and Feb. 1 will get a free large pizza with up to three toppings, but only after the Super Bowl, or Feb. 2 through Feb. 22. On Monday, the chain will launch a new Bacon Cheeseburger Pizza to catch that wave of business.

Papa John’s commercial, which will air before the game, brings together Denver Broncos quarterback Payton Manning, who is also a franchisee, and NFL Hall of Famer Joe Montana.

However, Papa John’s officials say the brand is too big to advertise during the game, according to Forbes. Instead, the chain is looking to social media again this year, asking fans in Phoenix to capture videos of end-zone celebrations with the hashtag #UpYourDance, which could be posted at upyourdance2015.com.

The company expects to receive about 1 million orders on Sunday. “Our delivery drivers will circle the earth 12 times in deliveries on Sunday,” Bob Kraut, Papa John’s chief marketing officer, told Forbes. “We anticipate this could be the biggest day of the year for us.”

Domino’s Pizza has similar expectations, predicting its 5,000 domestic units will sell more than 11 million slices of pizza and more than 3 million chicken wings, with half of all sales coming from digital ordering channels.

Customers watching the game on Samsung Smart TVs will be able to track their pizza’s arrival right on the screen, so they won’t even have to glance away for a minute.

During last year’s game, Domino’s delivered enough pizzas to stretch across more than 2,400 football fields, the company said. This year, in the U.S. alone, delivery drivers will cover the equivalent of more than 335 round trips from Boston to Seattle, which is about a 50-percent increase over a typical day.

The chain anticipates that sales will be particularly strong in Seattle and Boston at the beginning of the game. But the city of the winning team will likely see strong sales at the end of the night as celebrations linger.

This week, Snagajob released a video showing what it’s like to be a Domino’s pizza delivery driver on game day.

Pizza Hut is spotlighting its new flavored crusts with ads scheduled for the pre-game show and featuring Buffalo Bills head coach Rex Ryan, who tosses red flags to call the pizza crust “incomplete” because it is not flavored.

The spot refers to a controversial overturned play that resulted in the Dallas Cowboys’ loss to the Green Bay Packers. And, yes, Cowboys quarterback Tony Romo gets the flag again, this time, for his unflavored crust.

The Tilted Kilt Pub & Eatery is also hoping to engage fans to contribute content on social media during the Super Bowl, though it’s not really football related.

The chain has added eight new chicken wing sauces to its roster in preparation for the game and is promoting them with a “Calling All Wingmen” campaign that invites customers to share their best “wingman” story in a video submission. Winners could win free wings for a year or a trip to Las Vegas with their three best wingmen.

Video submissions should be less than 90 seconds, and apparently use of hot sauce, shark attacks and loud burping is encouraged.

Some operators are tailoring their tailgating packages to specific groups of fans.

Potatopia is hosting a “Spudbowl” competition between two Super Bowl-themed dishes that will be offered in the days leading up to the game. It’s the “Sweethawks” — sweet crinkle fries with Jersey slaw, red onion, broccoli, cheddar, spiced beef and garlic aioli — versus “Potatriates” — smashed potatoes, Jersey slaw, red onion, scallions, bacon, smoked gouda and bacon aioli. Both are $8 and available at three locations in New York and New Jersey.

In addition, fans wearing either team’s jerseys who take photos and post on any social media site tagging @potatopia will get a 20-percent off coupon for their next visit.

Another Manhattan restaurant is shooting for a more upscale football crowd.

Old Homestead Steakhouse plans to offer wings covered with foie gras, doused in cream spiked with $2,400-per-bottle cognac, or topped with Royal Ossetra caviar. Other “wings” on the menu include $400-per-pound Kobe filet mignon on the bone marinated in $1,000-per-bottle sake.

And they’re only $4,900 for a dozen. Because, as this parody of Bruno Mars’ song “Uptown Funk” so artfully points out, it’s the last game.