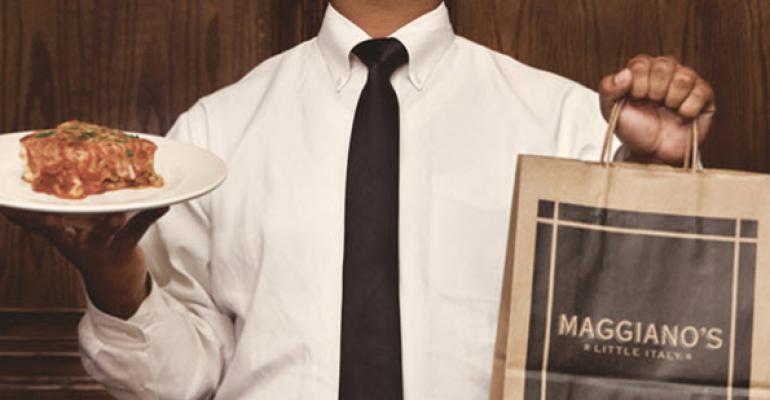 Restaurants are renewing their emphasis on to-go bags, using the packaging to build their brands and keep their names at the top of customers’ minds.

“It’s one of the most powerful assets you have as brand,” said Terri Snyder, chief marketing officer for Tampa, Fla.-based Checkers and Rally's Drive-in Restaurants Inc. “Traditionally, people have used the bag tactically. But I think it’s a really critical strategic communications vehicle. It’s a medium for the brand.”

The 800-unit burger chain has anthropomorphized its “Mr. Bag,” turning him into a “brash” brand spokesman with his own website.

“You are seeing more and more people not overlook the bag,” Snyder said. “It’s not just a badge to show people what you bought, but it lives with the consumer not just for minutes but for hours and sometimes days.”

Mr. Bag works especially well for Checkers and Rally’s because the double-drive-thru concept is almost totally takeaway. Mr. Bag began starring in the brands’ “It’s In the Bag” campaign with its launch in October. That’s when the white paper bag was redesigned and Mr. Bag started being featured in television, radio and social media advertising.

“There’s a lot of gravity around Mr. Bag and what he can say and how he can say it,” Snyder said. “It plays out strong in all our communications. His personality is the same as our food: bold, over the top, brash.”

Snyder said the new campaign was within standard costs for the paper bag, which in the past highlighted the brand’s late-night hours or seasonal ice cream promotions. Cost depends on colors and coverage, she said, and Checkers and Rally’s stayed with its red, black and yellow color scheme.

“If you start with brand strategy, you can figure out what kind of bag you should use,” Snyder said. “How important is it to the occasion? How thick should it be? Should it be plastic or paper?”

Peter B. Bartlett of Dallas-based Watkins & Co. Inc. and www.RestaurantTakeOutBags.com said packaging prices can range from 1.5 cents per bag to as much as $3.50 each. “The average would be around 30 to 35 cents,” he said.

“You have to buy a bag anyway, so the value added to print your logo and message is a powerful marketing tool to get more eyeballs to see your logo or concept,” Bartlett said. “And the reuse ability is powerful the better style of bag you use.”

Bartlett said customers appreciate the value of packaging. “The idea is to create the same experience as if they were sitting in your restaurant without having to pay for the extra real estate to service your customer,” he said, adding that his clients have increased sales as much as 10 percent to 20 percent with well-marketed packaging.

The slogan is prominently featured on the white bag, along with the brand’s signature Golden Arches and an abstract burger for a simple, modern look. The sides of the bags contain messages such as: “When life hands you onions, make a Quarter Pounder,” and “The reason people smile when you say cheese.”

The 1,750-unit Chipotle said in a statement that the stories “are meant to entertain while exposing readers to some of today's most creative, influential and thought-provoking writers. Each cup and bag will also include unique illustrations commissioned from a range of artists.”

This year, the artists range from Aziz Ansari, comedian and actor in the TV program “Parks and Recreation,” to Amy Tan, author of “The Joy Luck Club.”

Since it launched, the Chipotle series has been curated by bestselling author Jonathan Safran Foer, author of such books as “Extremely Loud and Incredibly Close” and “Everything is Illuminated.”

“While typical fast-food companies use their packaging to promote new menu items or sell the space to advertisers, we have always tried to use our packaging to engage with our customers’ wit and intellect," said Mark Crumpacker, Chipotle’s chief marketing and development officer. “Given the response we had to the first round of the 'Cultivating Thought' series, we are continuing the series with more authors we think our customers will enjoy.”

The 2015 series includes Brazilian, British, Dominican and Spanish writers, as well as American writers whose families are of Chinese, Polish and Indian descent.

“The essays are themed as ‘two-minute’ readings,” Chipotle said. They are also available online at chipotle.com/cultivatingthought.

While Chipotle realized many customers read bags and cups in its restaurants, casual-dining concepts like Brinker International Inc.’s Maggiano’s Little Italy consider take-home bags an essential part of the brand.

“We realize the bags are part of our brand identification and is worth the investment. As a result, the quality of the bag is very important,” said Michael Breed, Maggiano’s senior director of marketing.

He said the brand opted for premium handled bags that use reuasable materials. The bags are redesigned once a year during the holidays with a seasonal motif.

Other restaurant brands have found that special to-go packaging can work for limited promotions as well.

Generally, Buffalo Wings & Rings uses plastic carryout bags, but the football game promotion called for something that would hold food as well as a promotional game-squares board and a trivia game.

“The Super Bowl is one of the biggest times for our restaurants,” Matheson said. “We wanted something that they could reuse and perhaps use for tailgating or another event.”

The black woven bag with a handle is printed with the brand’s signature buffalo head and logo. “We wanted something with utility and that would be durable,” Matheson said.

“I believe every touch point with a consumer is a way to tell your brand’s story,” Matheson added, citing such brands as Chipotle, McDonald’s and Starbucks.

“Whatever you put in the hands of the consumer is an opportunity to tell your story and your point of difference,” she said. “The bag is as important as anything else you do.”